Love Only Murders in the Building? Then Apple TV+ has your next comedic murder mystery obsession at the ready.

In The Afterparty (three episodes are now available, with additional installments dropping on Fridays), a group of former friends and acquaintances reunite for their 15-year high school reunion. But when rich pop star Xavier (Dave Franco) invites them over for a decadent afterparty, the night ends in death, with one of their own believed to be the murderer. Each episode follows a different character’s perspective of what happened that night, and in the premiere, Aniq (Sam Richardson) is first up to tell his side of the story to Detective Danner (Tiffany Haddish). Why is he Danner’s prime suspect? Read on for a full recap.

As Aniq mentally prepares for the shindig, he tells himself that nothing can possibly ruin his night. But we know that’s not the case when we quickly cut to Xavier’s body flying off a balcony and down the edge of a bluff. His head thwacks onto a rock below, killing him instantly as people scream in the background. Let the whodunit begin!

Detective Danner arrives on the scene with her partner Detective Culp (John Early), and despite her superior’s specific instruction that she only take statements, she promptly announces herself as the lead on the case. After spitballing a bit, they deduce it’s a cold-blooded murder. (Dun dun dunnnn!)

Inside the house, Aniq’s face is covered with marker. “Nerd” is written across his forehead, plus he’s rockin’ some serious cat ears and whiskers. He worries that someone might think he committed the crime. From the looks of the house, the afterparty looks like a huge success (until a guy’s head went splat!, of course). 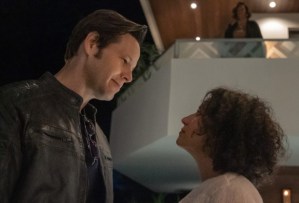 Chelsea (Ilana Glazer) tells Brett (Ike Barinholtz) that she knows what he’s hiding in his car. And he knows what she said to him at the reunion. “So nobody needs to say anything,” she confirms. As their shady chat continues, Danner eavesdrops from above.

A woman named Indigo says that Ned played a prank on a passed-out Aniq, while Xavier was busy peeing off the balcony right onto Jennifer. (Gross.) The TV then woke Aniq up, who angrily stormed off to find Xavier. The next thing they knew, Xavier was dead.

Danner questions Aniq privately, who tells her he came to the party to see his former crush Zoe. When the newly divorced woman emailed him asking him to come to the reunion, he couldn’t refuse. We flash back to the reunion, as Aniq retells his meet-cute with Zoe. (Danner’s into all of the rom-com deets and even pulls out a bag of popcorn for the story.) After a hilarious karaoke mishap, Xavier sweeps Zoe off to another table. Meanwhile, Brett (Zoe’s ex) makes a loud threat of killing anyone who touches her, which of course Aniq recounts to the detective.

Yasper (Ben Schwartz) distracts Xavier, pulling him away for a chat so Aniq can swoop back in. He and Zoe sneak off to find some of the school’s delicious chocolate chip cookies in the cafeteria. After encountering a hammered Chelsea, who tosses her drink on Aniq, they gallivant to the teacher’s lounge to chomp on some weed gummies.

Aniq finally cops to having a crush on her in high school, and right before they’re about to kiss, Zoe’s daughter interrupts. After Zoe asks if he’s going to Xavier’s afterparty, Xavier obnoxiously whisks her away on his private helicopter, telling Aniq to meet them there. Chelsea then yells to Brett that Aniq almost kissed his ex, but before Brett can pound him, Aniq, Chelsea and Yasper hop in the car and set off for Xavier’s, with the furious Brett speeding after them. 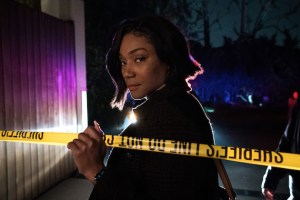 At the party, things get hazy for Aniq. He remembers Brett pushing him into some shrimp, and Brett and Xavier having an argument on the upper balcony. He drank a flaming Jell-O shot for some courage, but then soon blacked out. The next thing he remembers is waking up after being pranked. That’s when he guessed that Xavier was to blame for the embarrassment, and everyone found Xavier’s body.

Danner tells him that the story points to him as the number one suspect, but Aniq tells her Brett is likely the culprit. While he tries to defend himself, she ends the interview saying she has other guests to talk to.

In the bathroom, Aniq realizes he needs to solve the case himself using his detail-oriented escape room-designing skills. “There’s evidence somewhere. We just have to find it,” he tells Yasper. Then he finds a ripped piece of paper in the garbage that reads, “This is payback for what you did to me.”

As the episode wraps, Culp catches Brett trying to sneak off in his car. The plot thickens! Next up: Danner wants to hear Brett’s version of the night…

So who’s at the top of your suspect list? Grade the premiere below, then light up the Comments!