The “kids” of Riverdale this week drew fire from Peacemaker, and as a result the HBO Max series sparked some mind-bending questions about The CW’s existence within its superhero universe.

Also, why is Vigilante anxious to catch a show that has been off the air for over a year…?

At the six-minute mark in Episode 5, titled “Money Dory,” a team briefing about the nature of Butterflies runs off the rails when Economos’ PowerPoint presentation elicits snark from frequent foil Peacemaker.

Economos tries to deflate things by apologizing for what he reckons actually has his teammate on edge, the hasty framing of Chris’ father Auggie for murder — though that only provokes Peacemaker to rattle off a long, long (and even longer if you stick around after the credits) list of people he could have framed instead, including Khloe Kardashian, Michael B. Jordan and “those f–king c—s from Riverdale.”

The Riverdale reference is funny, for starters, because Lochlyn Munro (who plays Betty Cooper’s father on the CW series) plays Evergreen PD detective Fitzgibbons on Peacemaker. 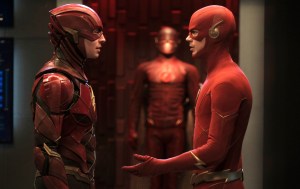 But if you really want to descend down a rabbit hole, consider what the existence of the CW network in the larger DCEU might mean. Like, if The Flash is also a TV series there… well, for one, why would it be (when the real deal is ostensibly making headline zipping around Central City)? But more vexing, what do we make of the DC movies’ own scarlet speedster (played by Ezra Miller) appearing opposite Grant Gustin’s Barry Allen in the Arrowverse’s “Crisis on Infinite Earths” crossover event?

Was that the DCEU’s Flash guest-starring on a fictional show about himself? 🤯 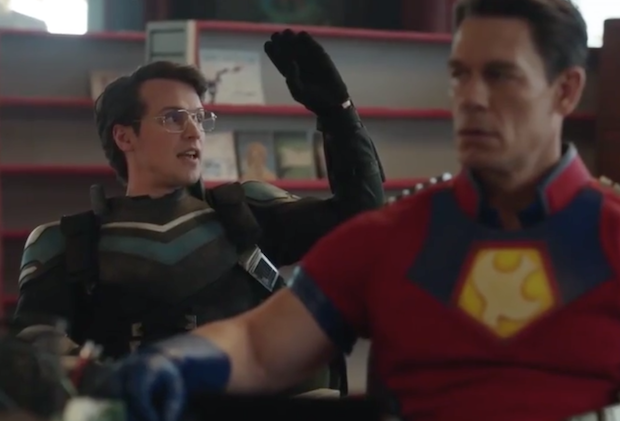 A moment later in the same Peacemaker scene, another TV show got name-checked — except this one was a bit of an anachronism, calling into question if the offshoot of series creator James Gunn’s The Suicide Squad is also set in the present day.

When team leader Murn ends Peacemaker and Economos’ shouting match and threatens to have everyone pull an all-nighter, Adrian Chase aka Vigilante raises his hand to ask, “Do you have cable…? I don’t want to stay here overnight if there’s no cable, Fargo is on tonight.” Doubling down on the reference, Economos corrects Adrian: “Fargo‘s not on until tomorrow night, you f–king nerd.”

The thing is… the Fargo TV series hasn’t been on since November 2020 (when its fourth season ended), and there is no sign of it returning anytime soon.

But is Gunn’s Peacemaker series not also set in the present, if Adrian is anxious about missing a show that hasn’t been on for well over a year?