It’s never a good sign when a wounded boyfriend sends his boo’s calls to voicemail. And that’s exactly what Aaron did in the Season 4B premiere of Freeform’s grown-ish this Thursday night.

One of the reasons Aaron didn’t respond to Zoey’s calls, while secretly watching her from his car across the street, is he didn’t know what to say or what he wanted to do. All he knew was that he was angry at Zoey for taking an internship from Luca and triggering his insecurities. He had punched Luca at the luau and was still smarting about his pride and his perceived defeat.

After all, Aaron had gotten Charlie to waive Zoey’s internship requirement, but Luca had swooped in and stolen his shine once again. He said as much the next day when Doug and Vivek stopped by Aaron’s place to see if he was OK. Aaron said he had never been friends with Luca and described him as an “annoying pest” who hovers and interferes with his and Zoey’s relationship.

Aaron added that he’d asked Luca to fall back after getting Zoey fired from her previous internship with a tweet and instead of butting out, Luca doubled down with a job offer. But Doug saw things differently and said he was doing Zoey a favor because Luca felt bad for getting her pink slipped. Instead of considering this perspective, Aaron crudely accused Doug of swinging from Luca’s scrotum. Wow. 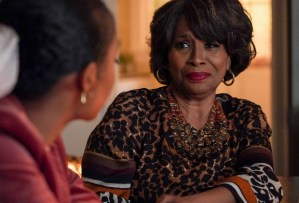 Over at the Johnson household, Zoey returned to her family home for respite while awaiting Aaron’s call and avoiding her nosy roommates’ questions. She ran into Grandma Ruby and Pops, who gave their eldest grandbaby a stiff drink and tons of unsolicited advice. Ruby also threatened to steal Aaron away from Zoey if she wasn’t treating him right. Oh, Ruby!

Zoey explained that Aaron had cold-cocked Luca in the jaw because she had taken an internship with Luca; Ruby opined that by taking the offer, she bruised Aaron’s ego. Zoey confessed that she hadn’t thought about how the move would make Aaron feel. Pops disagreed and said in order to handle a headstrong man, she needed to take words of wisdom from one.

Pops accused Aaron of being weak and added that no secure man needs his ego stroked. Grandma Ruby laughed in response and reminded Pops that he was jealous of her brief relationship with R&B crooner Johnny Gill. An impressed Zoey asked for details, but this caused the two senior citizens to bicker even more, so Zoey dipped and said she knew what to do now. 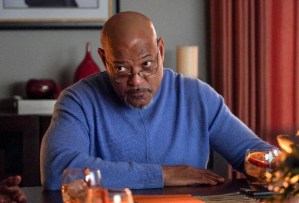 Back at Aaron’s place, Doug asked his friend how was Zoey supposed to respond to him if she didn’t know what he was thinking and Vivek seconded that, adding that it’s important to let your mate know where your head is. Doug encouraged Aaron to confront his negative emotions so Aaron did just that and went over Luca’s place to talk face-to-face.

At first Luca, who was rocking a pretty noticeable red bruise on his left cheek, wouldn’t let Aaron in and said he’d take his apology from the hall. Aaron said he wasn’t there to say sorry but to confront their issues. Doug and Vivek tagged along for support and Luca eventually let them in. The four had drinks and Aaron said Luca disrespected him with his internship proposal and that it was his way of keeping Zoey close.

Luca swore he came up with the internship to right his wrongs and help Zoey pursue her fashion talents and passions. He also surmised that Aaron was projecting and that it was Aaron who had inserted himself into Luca and Zoey’s relationship by helping her with “Black stuff” and taking her to the airport hours after #Zuca broke up. Ouch. The truth hurts.

Aaron apologized and it seemed like everything was all good, until Doug confessed that he had been secretly kicking it with Luca’s little sister Kiela behind his back. That’s when Luca punched Doug in the face and though we didn’t get to see it, we can only imagine Doug really needed that ice pack he was holding. Luca also iced his hand and told Doug he was removing himself from the Kiela situation and Aaron got inspired. 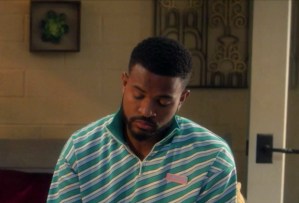 He decided to break up with Zoey and remove himself from the love triangle with her and Luca. Up until that point, Zoey had been optimistic about her row with Aaron and thought they could patch things up. Aaron said he has a problem with her and Luca, and Zoey emphasized she really wanted to work at Anti-Muse, Luca’s fashion label, but didn’t look at Luca romantically.

Aaron said she should work there and because he didn’t want to be the petty boyfriend who stands in the way of her career aspirations, he couldn’t be her boyfriend anymore. Aaron said the problem was his and he had some self-improvement to do, including getting his career on track. Zoey cursed him out and by the time Celeste’s “Strange” played, it was abundantly and painfully clear #Zaaron was no more.

Are you bummed that Zoey and Aaron broke up on grown-ish or do you say good riddance? Grade the premiere in our poll and drop your thoughts in the comments.