It almost felt like an episode of The Bachelorette when not one but two men proposed to Angela on Tuesday’s Season 1 finale of Our Kind of People.

We’ll get to whom she chose in a bit, but first, let’s unpack all of the wacky things that happened along the way. For starters, Taylor broke up with Nikki to be with Lauren, causing Nikki to act super emotional and borderline insane. What’s even crazier is that Taylor didn’t say why they needed to break up before Nikki stormed off and wondered if she would ever love again.

Making matters worse, she told her parents that Taylor was the first person she loved. We’re hoping that she meant romantically because otherwise, it sounded as though she didn’t love her mom and dad. Nate calmed Nikki down, and Angela assured her she would love again, and then everyone laughed and threw spaghetti noodles in a food fight of sorts. Wow! Nikki sure rebounded quickly from her broken heart.

A few days later, Quincy accidentally exposed Lauren as the reason Taylor and Nikki broke up, and Nikki cursed out all of the Franklins and the Duponts and stomped off again. Sigh. Nikki stays in her feelings. But she got it honest. Her mother Angela was all over the place, too. One minute, she was laughing and reminiscing with Nate over dinner, and the next, she was running to Tyrique’s arms after Nate proposed. 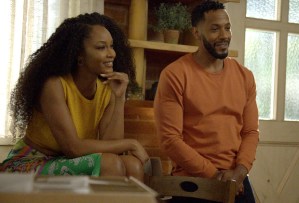 Part of the problem was Tyrique interrupted the proposal to give Angela a file on Teddy that made it seem like he might have shot and killed his brother. Angela did a little digging and tried to get Leah to help her, but Leah was still riding for their dad Teddy, so she left in a huff. And later, when Tyrique proposed with roses, candlelight and a bigger and shinier engagement ring, she turned him down as well, only to say yes the next night.

Back to Leah, who felt bad about angering Angela and how Lauren’s messy romantic entanglement hurt Nikki, so she decided to help Angela take down Teddy. Leah, Angela, Raymond, Tyrique, Aunt Piggy and all the kids cornered Teddy in his office after showing him the gun from Darius that was used to kill Teddy’s brother, and he started crying and confessing. He didn’t kill his brother, his late wife Rose did because she tried to shoot him for running away with Eve, and his brother stepped in front of the bullet.

Everyone was gobsmacked by Teddy’s admission, but Angela still had questions. She wanted to know if Teddy had been the one to frame her mother, and he denied it. That’s when Angela realized Olivia had framed Eve for drug possession and confronted her. A sassy Olivia confirmed Angela’s suspicions without knowing Angela was recording everything on her phone. A not-so-tech-savvy Olivia tried to destroy the phone, but Angela said the confession was on the cloud and used the intel to force Olivia to let her into the Gracities. 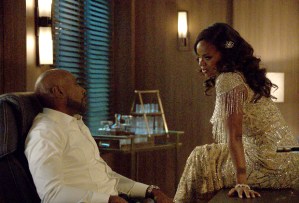 Everything seemed to be going Angela’s way. Olivia was going to invest in her hair-care business, she and Leah were close again, and she was newly engaged. But Our Kind of People is a soapy drama after all, and not long after Leah told Raymond the good news about their businesses and her desire to help Angela’s company soar, someone came into Teddy’s office and shot Leah through the back of his chair because they thought she was him. Who would do such a thing, and will Leah live? Perhaps if there is a Season 2, we’ll all find out.

What did you think of the Season 1 finale, and will you come back for a possible second season? Grade the finale in our poll, and drop your thoughts in the comments.