And just like that, HBO on Monday transported us to The Gilded Age, another series starring Cynthia Nixon in which New York essentially plays a character all its own.

But this is a very different New York than the one inhabited by Miranda Hobbes. As the show’s title suggests, this is the New York of 1882, where no one is meeting at brunch to wax poetic about their sex lives. Heck, brunch won’t even become popular in America for another 50 years. As for the sex, don’t hold your breath. Even married couples post up in separate bedrooms at the end of the night.

In some ways, it’s more like The Real Housewives of Old New York, complete with the same basic takeaway: money can’t buy you class.

Money can, however, buy you a pretty exquisite set. “We couldn’t take over a street on the Upper East Side, or pretty much anywhere, for the period of time we’d need to turn it into,” executive producer David Crockett tells TVLine. “So we built a city-long backlot for the street scenes. Our production team built these palaces, which in present day only exist as museums and colleges and whatever.”

Read on for our breakdown of Monday’s premiere, along with more insight from the cast and EPs: 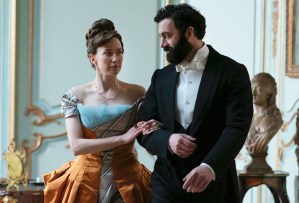 HELL HATH NO FURY | In this war of old money vs. new, Bertha Russell (Carrie Coon) and her husband George (Morgan Spector) represent new money with a capital-N. And a capital-M while we’re at it, because let me tell you, these hot monsters have money, honey. Adjusting for inflation, you could probably bottle one of the Russells’ farts and use it to pay off a semester of college tuition at any of the ivies today. But even with George’s impressive standing in the business sector (so much talk of trains!), the Russells remain shunned by the established upper crust. One society shrew even manages to shade the Russells’ lavish home — which, may I remind you, has its own Beauty and the Beast-style ballroom — by saying, “How brave not to go with the same old builders everyone else uses.” How brave, indeed.

Still, Bertha hopes to win over her potential frenemies with a lavish palace-warming party, only for those hopes to get dashed when [sad trombone] almost no one shows up. No one important, anyway. (No offense, Kelli O’Hara! I loved you in the Bridges of Madison County musical!) Even more painful than the sight of that empty house is the veritable smorgasbord of fine foodery that goes uneaten. But even as Bertha cries herself to sleep, her resilience remains. “I’ll never give up,” she tells her husband. “And I promise, I’ll make them sorry one day.”

On the subject of Bertha’s fabulous, feathered frocks, Coon acknowledges that the pandemic ultimately benefitted the show’s wardrobe. “Because of Covid, [the costuming team] actually got more time to do hand embroidery and hand beading. They got to to put even more detail than they otherwise would have because of the shutdown. In some ways, we benefited greatly from that time. We also kept all the Broadway shops open and all the Broadway actors employed. But it was extraordinary. I’ve never been costumed like that in my life.” 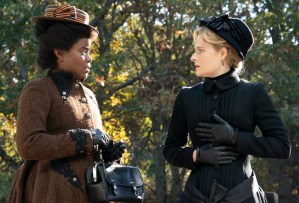 ‘FOR A NEW YORKER, ANYTHING IS POSSIBLE’ | Now for the old money of it all: Just across the street from the Russells, we meet Agnes van Rhijn (Christine Baranski) and Ada Brook (Nixon), a pair of wildly different sisters. Just imagine Pinky and the Brain in wigs and petticoats and you’ll get a pretty good sense of their dynamic. Their life of peaceful snobbery is unexpectedly turned upside down when their niece Marian (Louisa Jacobson), the daughter of their estranged brother who misappropriated the family fortune, comes to live with them after her father’s death. On her journey from Pennsylvania to the Big Apple, Marian befriends an aspiring writer named Peggy (Denée Benton), who ultimately accepts a job offer from Agnes to work as her personal secretary.

For Benton, part of the excitement of playing Peggy comes with the opportunity to depict an affluent Black woman at this time. “We’re so used to this very down-trodden narrative about this person who’s suffering from all levels of abuse,” Benton says. “And while Peggy is suffering from some of those same abuses, we’re able to see the way most Black women move through that space. We make everything fly, no matter how much we’re given. For someone like Peggy, with access to money, I felt very strongly that she have access to similar types of finery that the white women have in the show.” The fact that her mother is played by Audra freaking McDonald is merely the icing on the cake.

And if you’re already swooning over the prospects of Marian and legal hottie Tom Raikes (Thomas Cocquerel), you’re not alone. “They’re both outsiders,” notes executive producer David Crockett. “They both come from a small town to the big city, which a lot of people can relate to. What’s interesting about their journey is that they start in a very similar place, but they react to the city in different ways. They’re both young and idealistic, and you learn a lot about our world through their eyes. You want them to thrive, and you’ll see where that goes.” 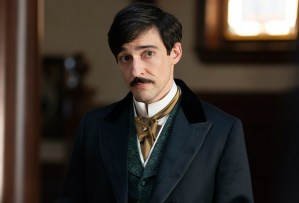 THE GILDED CLOSET | Though he presents himself as a man about town in pursuit of the perfect bride, Agnes’ son Oscar (Blake Ritson) is revealed to have a male lover at the end of Monday’s premiere. Is it entirely shocking? Not for anyone with functioning gaydar. But when you remember that this show takes place in 1882, Oscar’s secret does feel a bit more scandalous — and far more tragic.

“If you look back through history, as we did, you find examples of gay men and women that existed and were out, so to speak, with their homosexuality,” Crockett says. “That was not an issue for some, but for most, of course, it was kept in the shadows. Julian wanted to portray it because it was real life. Just like all of the people that you see in these stories, these are just people living their lives. They have the same issues that we have today.”

Adds EP Gareth Neame, “Oscar does really want a ‘normal’ life. He wants money and a comfortable lifestyle, but the only way for him to do that is to disguise his sexuality and form a marriage. Though it seems dishonest in some way, he’s serious about it. He remarks several times [in the first few episodes] that he can do this for a period of his life, but at some point he’ll need to settle down and marry into money, and he’s not going to live this lifestyle for the rest of his life. That was true of people almost within our lifetime, certainly up until the 1960s. It will be fascinating for younger audiences to see how extraordinarily different the morals of the time were.”

Your thoughts on The Gilded Age thus far? Grade the premiere below, then drop a comment with your full review.