Promised Land opened with the story of Juana (played by Katya Martín) and Rosa, two young women  who illegally crossed the border from Mexico with the end goal of making it to Merced, Calif. for alfalfa-picking work. When ambushed by border patrol trucks, the gals managed to hide with the help of Carlos (Andres Velez), a young man  they met along the way. The three then set out for Bakersfield, where Juana heard of someone who might drive them to Sonoma County, where Carlos has a lead on vineyard work. That someone, alas, had ill intent for the girls, and his buddy secretly  jumped Carlos while the girls were unwittingly being led to their abduction. Carlos managed to stab his attacker, after which the girls clocked their own with a bottle. Rosa was shot by the latter goon before climbing with Juana into the bad guys’ pickup, and Carlos drove  them away. Carlos and a tearful Juana dropped Rosa off at a California ER for proper care, before continuing their own journey.

Other Promised Land action took place at Heritage House, the Sonoma County estate and winery to which young Carlos and Juana were headed. Joe Sandoval (John Ortiz) lords over the very successful vineyard and business, though his daughter/GM Veronica (Christina Ochoa) is angling to take the reins. At a back patio lunch, we learn that Joe is about to celebrate 20 years of marriage to second wife Lettie (Cecilia Suárez), and that their blended family includes Joe’s three kids by another mother — Veronica, estranged/recently returned Antonio (Tonatiuh), and label artist Carmen (Mariel Molino) — Lettie’s son Mateo (Augusto Aguilera), and Joe and Lettie’s son Junior. 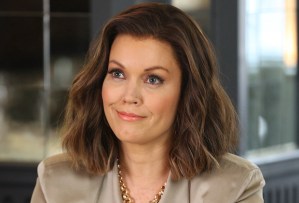 Of course, there is some corporate drama at hand. Joe meets up with  Margaret Honeycroft (Bellamy Young), a hotelier/stockholder who is gunning to take over Heritage House, seeing as she believes Joe stole it from her father years ago. Joe in turn argues that back in the day he rightfully took a small nothing and turned into a major something, and he will vehemently oppose her planned stock grab. By the close of their face-off, it becomes clear that Margaret is in fact Joe’s first wife, and thus mother to Antonio, Veronica and Carmen. 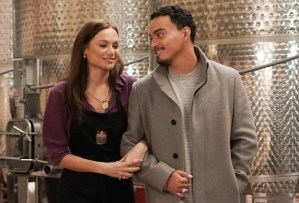 With prodigal son Antonio’s return to the family homestead, Joe informs him that Veronica will be named the new CEO, but he would like Antonio to help guide his sister on the craftier bits of corporate leadership. Antonio happily agrees, though it is later revealed, when he visits the mom he claims to barely speak to, that he is in fact doing Margaret’s bidding and will use his 5% stake to help her seize control, if she can pull together the other 46%. 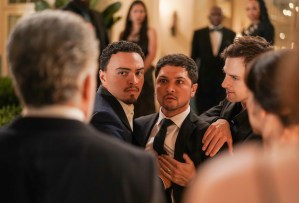 Another premiere subplot involves Daniela, an undocumented worker who lands a job at the Sandoval estate, claiming she has working papers when she in fact does not. Mateo goes out of his way to vouch for the young woman, and even sets her up with a guy who forges working papers/IDs. But when said guy gets clipped by a car one night — a car driven by a distracted (and maybe buzzed?) Veronica — the hit-and-run investigation reveals his side gig and in turn Daniela’s true status. With the local sheriff’s implicit OK, Joe saves Daniela from ICE but sends her packing, infuriating Mateo to a point that the lad lashes out at his stepfather at the swanky anniversary party. In doing so, Mateo threatens to air some of his stepdad’s dirty laundry regarding his own humble beginnings. Because…. 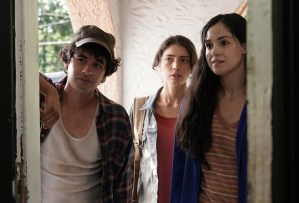 …Carlos and Juana, from the other storyline? They are actually young Joe and Lettie, before they met up with the former’s contact — his brother, Guillermo/”Billy” (Rolando Chusan) — at the Heritage House vineyard and got their forged papers/new identities. What’s more, grown-up Billy has unexpectedly re-entered Lettie’s life in the present, as a clergyman at the Catholic school were Junior was recently pinched for possessing prescription drugs.

So, taking stock of all the secrets being kept/questions coming out of the premiere alone:

* Joe and Lettie are actually Carlos and Juana, and Pastor Billy is Joe’s brother
* Antonio is conspiring with his mother, Margaret, to seize ownership of Heritage House from his father, Joe
* Veronica was involved in a hit-and-run, of a vineyard worker who trafficked in forged working papers
* Why did Joe not end up with Lettie first?
* Why does Margaret believe Joe “stole” her family’s vineyard?
* Who is Mateo’s father?
* Did “Billy” become a priest as some sort of penance? And why is Lettie aghast to see him?
* Veronica’s husband (played by Andrew West) is totally gonna hook up with her sister Carmen, yes?

Weigh in on the Promised Land premiere below, and take note that Episode 2 will get an “early debut” Tuesday on Hulu (before airing on ABC next week).