Kaci Walfall, the actress behind the title character Naomi, is actually a teenager.

While that sounds like a no-brainer, it’s also a detail that brings an abundance of believability and relatability to the performance that can’t be found on some other shows, says DeMane Davis, a co-executive producer and director on the CW comic-book drama (Tuesdays, 9/8c).

“She is so much fun to direct because she’s a perfectionist who wants pointers,” DeMane tells TVLine. “Kaci comes prepared and ready to play with a little notebook. She’s going to be a star, you can just see it. What I love most is that her character, Naomi, is a teenager who is learning and growing, and so is Kaci — and that comes across in what you see onscreen. It feels real because it is.” 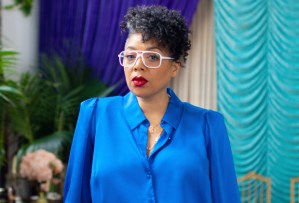 Davis, whose directing credits include Netflix’s Self Made: Inspired by the Life of Madam CJ Walker and CBS’ Clarice, got her start on OWN’s Queen Sugar, where she worked with Naomi co-creator and EP Ava DuVernay. Davis was part of DuVernay’s initiative to have the OWN family drama helmed by a roster of women directors. As a co-EP on Naomi, Davis directed two episodes and will helm the Season 1 finale as well.

In that way, Davis adds that she feels a little like Naomi, a girl who is forced to embrace a gaggle of superpowers she didn’t even know she had.

“Naomi has powers, but as we saw in the pilot, she had a hard time admitting it,” the Boston native recalls. “That’s what people of all ages do. We have a skill, and we doubt ourselves. Suddenly, you have to accept it, and then you have to incorporate it and share it. As a director, my arsenal of skills keeps growing with every show. Now I know how to direct stunts and special and visual effects. I definitely feel like this is what I’m supposed to do.” 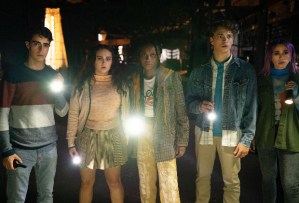 The inclusion and diversity on camera is also reflected behind the scenes, and that inspires Davis.

“This show is really affecting people,” Davis observes. “You have mothers and daughters watching and sharing their IG stories and it’s just really incredible to tell this origin story.” (And the numbers support that claim: Among Women 25-54 who co-view with a Female 2-17, Naomi with its premiere stands as the second-most watched broadcast series this TV season. Additionally, the first two episodes’ average total audience of 766,000 ranks third on The CW, behind Superman & Lois and Walker.)

“We need Black superheroes so we can dream even bigger. We’re normalizing inclusion by showing a different kind of hero and her diverse family and friends. It starts out as the way it should be, and becomes the way it is.”

What do you think of the inclusion on Naomi, and does this inspire you to keep watching? Drop your thoughts in the comments.