Mike Prince had the awkward energy of an overly eager stepfather in the Season 6 premiere of Showtime’s Billions.

But no amount of pained smiles or empty banter could win over Axe Capital’s finest, and in that way, we the viewers were like Wendy, Wags, Ben Kim and Bonnie, who looked at Corey Stoll’s Prince and longed for Bobby. Sure, there were sparks of promise. Every exchange Prince and Scooter shared with Wags, for instance, produced a number of fun verbal volleys, especially when Wags refused to take a slashed-in-half buyout.

Without Damian Lewis’ Axe around to ruffle Prince’s professional feathers, it was refreshing to see David Costabile’s Wags rise to the occasion with a Jerry Tarkanian reference for the win. (Prince, who was spying on Wags via a fitness ring, even saved Wags from joining And Just Like That‘s Mr. Big by calling the paramedics and getting him off his Peloton just in time.) Maggie Siff also didn’t disappoint with Wendy’s well-placed reference to the late, great musical artist known as Prince, whom she understandably preferred to her eponymous new boss.

Still, Stoll has his work cut out for him because, quite frankly, his Prince is not Axe, and it’s difficult to decipher from the season opener if we’re supposed to hate his character, root for him, or something in between. Daniel Breaker’s Scooter is equally quizzical, and while his repartee with Prince is pleasing at times, you can’t help but feel like the writers are trying too hard to make the pair likable. 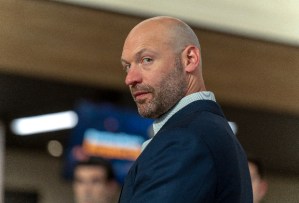 Was it a boss move to have Prince “fire” his unscrupulous clients to create a rarified list for which billionaires will have to earn their access? You bet your sweet bippy. Such a move is more impressive for the characters who work at Axe Capital than for viewers, though, at least until we see how this war of the wealthy plays out in terms of juicy storylines.

Until then, there’s crazy-like-a-fox Chuck, who momentarily turned into Old McDonald in the premiere with his farm and his neighborly feud with a rich guy (guest star Michael McKean), who enjoyed shooting obnoxiously loud antique cannons just a little too much. At first, it seemed like the mayor and the town were unable to help its new resident because Melville Revere, aka Cannon Boy, had deep pockets, lots of lawyers and friends in high places. 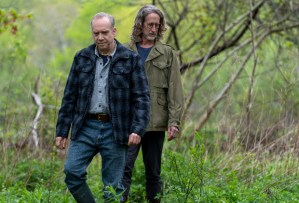 Chuck doesn’t walk away from fights easily, as we all know, and the more outside forces — including Prince, who boasted Revere as an investor — tried to get him to ignore the quiet-averse Revere, the more Chuck searched for ways to take him down. His lightbulb moment came when he convinced an environmentalist friend (for a fee) to plant some endangered bog turtles in a nearby pond so Revere could no longer legally fire his cannons. A petition from the mayor and residents against Revere followed soon after.

And just like that, Chuck discovered his raison d’etre again. He found the fervor he needed to go after the Princes and the Reveres and all the one percenters who think they can do whatever they want just because they are billionaires. Time will tell if Billions fans will feel as reinvigorated as Chuck does and stick around to watch.

What did you think of the Season 6 premiere? Grade the opener in our poll, and drop your thoughts in the comments.