Another familiar face is headed to Star Trek: Picard in Season 2.

Paramount+ has dropped the official trailer for the upcoming season, which you can check out above, featuring Whoopi Goldberg reprising her Next Generation role as Guinan.

The sneak peek finds Picard turning to his longtime friend for advice after Q presents him with one of his signature enigmatic tests.

See below for a full photo of Guinan back in action.

Goldberg recurred as the beloved bartender in Star Trek: The Next Generation Seasons 2-6, and appeared in the films Star Trek: Generations and Star Trek: Nemesis.

New episodes of Picard, premiering Thursday, March 3, take the legendary captain and his crew on a journey into the past. Picard must “enlist friends both old and new to confront the perils of 21st century Earth in a desperate race against time to save the galaxy’s future — and face the ultimate trial from one of his greatest foes,” per the official description.

The upcoming season will see John de Lancie reprise his role as Q, the omnipotent shapeshifter who reveled in testing Picard. Plus, Annie Wersching (Bosch, The Vampire Diaries) will recur as the Borg Queen, the infamous villain first introduced in the 1996 film Star Trek: First Contact (played then by Alice Krige). 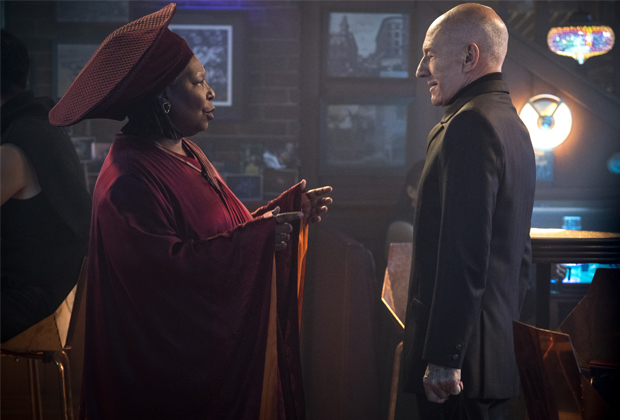 Are you excited for Whoopi Goldberg’s return in Star Trek: Picard? Sound off in the comments.