Captain James’ outlook is looking dire on this Thursday’s Walker (The CW, 8/7c). After being shot, the leader of the Texas Rangers lands in the hospital, where his prognosis is a “roller coaster” of ups and downs, his portrayer Coby Bell tells TVLine.

With James out of commission, Cordell must take on the duties of acting captain as he investigates the attack on his boss, but the leadership role doesn’t come naturally to him. On top of that, he’s stepping into the position under “very stressful” conditions, “because not only is it his boss, but it’s one of his best friends. There’s a lot of layers,” Bell adds.

Below, the actor previews the “heavy” episode and a blast from James’ past.

TVLINE | What is Captain James’ condition after being shot?
I would imagine he’s in pain. [Laughs] The episode is directly after he gets shot, so the audience is wondering, “Is he going to make it?” Trey sort of comes to the rescue. His military training kicks in. He has like a little gun battle with the guy who shot Captain James. Luckily, a trooper is already on the way to the location. She takes him to the hospital and then he’s in critical condition for the rest of the episode. It’s a roller coaster of, “Is he going to make it? Is he not going to make it?” It was a heavy episode. 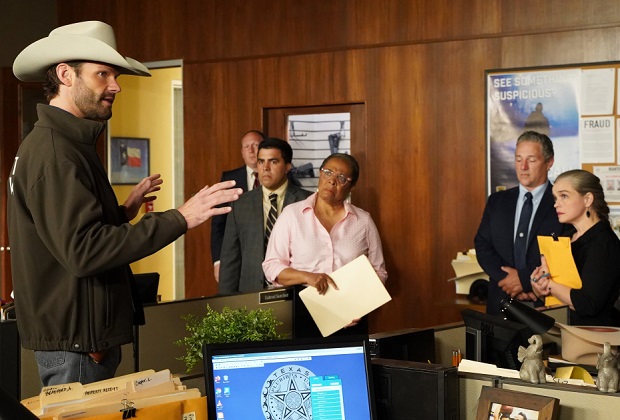 TVLINE | How are Captain James’ colleagues and friends handling these turn of events?
It’s a shock to everyone. James has always been this steady presence, and I think everyone assumes Captain James is going to be fine. He’s always been fine, he’s always going to be fine, and then [when] something happens, it’s like, “Whoa, wait a minute.” And then with Micki gone, I think James was sort of grooming Micki to eventually fill that captain role. But with Micki gone, Walker has to jump in, and he’s not really built for that kind of leadership. He’s more of a out-in-the-field, kick-butt-first-and-ask-questions-later kind of guy. But he’s learning. So Walker has to challenge himself to see what kind of leader he is in that situation.

TVLINE | When someone ends up in a situation like Captain James, usually, it makes them question their life, their choices, and maybe the people that are in their life or the relationships that they have. How might that be impacting Captain James, should he survive?
He’s recently divorced. When he gets shot, he’s in critical condition. His ex-wife shows up at the hospital with their son. It’s going to be cool for the audience to get to see that side of his life and get to know Kelly, his ex-wife, and what their relationship was like. Kearran Giovanni came in, and she was great. She just hopped right in, and it felt like she had always been there… You can see that there is still love there between the two of them.

TVLINE | And what can you tease about who is responsible for shooting Captain James?
The writers did another good job of leading the audience one way, only to have them get sucker punched from from behind, which they’re so good at with this show. I watch the show with my kids, and even having read the scripts, the twists that the writers put in there sneak up on me. We think they’re coming after Trey, but they were not.