Downton Abbey was such a resounding hit for PBS — a second movie spinoff debuts in theaters later this year — that it’s understandable TV networks would try to recreate that magic. So now we get The Gilded Age, a new HBO historical drama from Downton creator Julian Fellowes that’s also rich with luxurious interiors and finely crafted period costumes. (If you like to gawk at chandeliers, this is the show for you.) Unfortunately, the storytelling isn’t as rich, plagued by dull plotting and broadly drawn characters. The end result feels cynically calibrated to hit all the usual Downton notes… but doesn’t sound nearly as good. 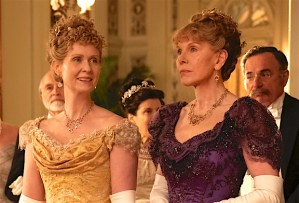 The Gilded Age — premiering this Monday, Jan. 24 at 9/8c; I’ve seen the first four episodes — is set in New York City in 1882, back when carriage horses trotted across unpaved dirt roads and flocks of sheep grazed in Central Park. This is the world of Edith Wharton, of ornate gowns and lush garden parties, and the period details are indeed exquisite. (Emmy nominations for production design and costumes are an absolute cinch.) It’s here we meet young Marian Brook, who moves from Pennsylvania to New York to live with her rich aunts Agnes and Ada (Christine Baranski and Cynthia Nixon) after her father dies. We also meet the aunts’ upwardly mobile neighbors, railroad tycoon George Russell (Morgan Spector) and his wife Bertha (Carrie Coon), who are eager to fit in but are looked down on as (gasp) “new money.”

Agnes has a cutting wit, firing off snooty one-liners like Downton‘s Dowager Countess, and Baranski is an acid-dipped treat, her voice dripping with sarcasm and contempt. But apart from her, the performances are stiff and overly mannered. The Gilded Age is all a bit bland and stilted, like staring at beautiful wallpaper. Marian (played by newcomer Louisa Jacobson) makes for a dull lead character, too noble to be interesting. Nixon’s Aunt Ada is dopey and sickeningly sweet, verging on brain-dead. Coon isn’t given much to play beyond various shades of “mildly annoyed.” And all the heroes and villains are very clearly delineated, with no room for nuance or complexity… or humanity, even. 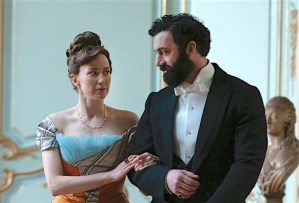 Maybe there’s no room because this show tries to juggle way too many characters. There are a dozen main cast members listed in the opening credits, and at least a dozen more with prominent speaking roles. So we only have time for the bare minimum of characterization beyond the familiar tropes: the Wide-Eyed Newcomer, the Scheming Servant. This show follows the formula of a classy costume drama so closely, it verges on self-parody; it’s like a fake TV show that a character on another TV show would watch. There is one character who doesn’t fit the mold — Peggy Scott (Denée Benton), a Black writer who Marian befriends on the train to New York — but the show’s gentle treatment of her feels naïve and anachronistic. Would a stubborn snob like Agnes, who says things like “I’m opposed to her tribe” and “He is not fit to be one of your circle,” really welcome a Black woman to live in her house and work for her? She doesn’t like anyone!

There are some fun historical touches, like when two servants go see an early stop-motion film and duck out of the way of the train coming at them on screen. But the 80-minute (!) series premiere is a true test of one’s patience… especially since so little happens in it. The story bounces between tedious boardroom dealings — railroad deals and stock manipulation do not make for exciting television — and weepy melodrama. We do get a twist that might have been shocking, if it weren’t directly lifted from Downton. And just in case we missed the subtext, the story’s themes are spoken aloud by the characters. (“If you are the future, they must be the past.”) The Gilded Age is a feast for the eyes, and its aesthetic pleasures are undeniable — but those are the only pleasures to be found here.