This week on HBO Max’s Peacemaker, the titular antihero was called on the carpet for flaking out on a kill, before starting to confront some dark pieces of his past.

Episode 4 — titled “The Choad Less Traveled” and written by series creator James Gunn — opened with the team post morteming their takedown of Senator Goff and his family. Peacemaker reports (to Harcourt’s slight dismay) that he killed the Butterfly he saw emerge from Goff’s blasted-open bean, Vigilante frets he may never stand up again with a mauled pinky toe, and Economos straps a wounded Judomaster to the office sofa.

In private, Murn chastises Peacemaker for freezing up on the pint-sized kid kills that Vigilante had to wind up doing, asking if his head is truly in this. Chris babbles on about not having his dove insignia on the gun, but admits that while has has famously vowed to keep peace “at any cost,” no matter who he has to kill along the way, he wasn’t going to ice the kids just because Murn said so. Murn hears him out but makes clear that their mission demands a sonuvabitch, “and you’re the only one I got.” He also tasks Peacemaker with keeping Vigilante close, now that he knows too much. Adebayo meanwhile apologizes to Harcourt for not being able to pull the trigger on the bodyguard, explaining that she has never shot, let alone killed, anyone before. Harcourt makes clear, “If you want to do this job, you can’t balk, ever.”

Driving Peacemaker to Auggie’s, Adrian (aka Vigilante) thanks his “BFF” for letting the senator torture him so — “You were helping me become the best me I can be!” — though as Chris notes, his tone sounds decidedly miffed. Arriving at his dad’s, Chris picks the front lock and finds the TV on but no one home. He stops by the household armory to grab some helmets (including one with X-ray Vision), and is clocking his father’s mounted White Dragon costume when Adrian walks in. Chris semi-explains the ranch-style house’s improbably vast “quantum unfolding storage area,” but Adrian is equally fixated on Chris’ white supremacist father. 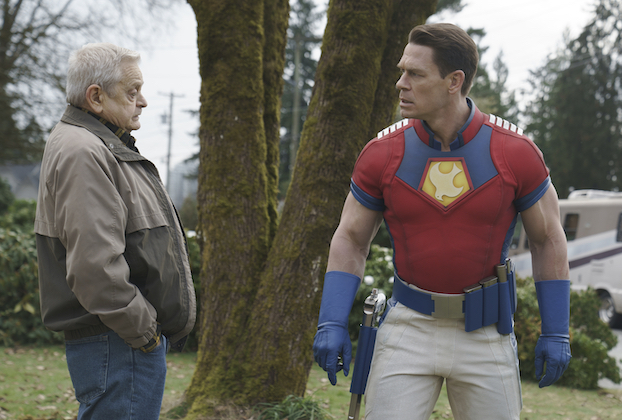 On their way out, the Old Man next door taunts Peacemaker about not having a proper “coterie of supervillains,” to which Chris explains that is because his are all “six feet under.” That sparks a debate about Batman’s famous-if-not-wholly accurate ethos, and Peacemaker’s contention that Batman is a “p–sy” who simply puts “clowns” back behind bars so they can escape and kill some more. When the Old Man sniffs that Peacemaker will end up in prison just like his dad, Chris realizes where his father is.

Peacemaker calls Murn about his dad getting framed for Annie’s murder et al, and Murn explains that it admittedly wasn’t the ideal plan. After Peacemaker reveals he is en route to visit his dad, murn tasks Adebayo with convincing him not to, lest their whole operation get exposed. Murn brings up the noobie’s oddly thin resume and how Amanda Waller insisted she was fit for the job — “this is your chance to prove her right.” Adebayo catches up to Chris outside the jailhouse and explains what Economos did, linking the car and fingerprints to Auggie. Adebayo points out that Chris’ dad is a “white supremacist who dresses up as the White Dragon — he’s not a good man” who deserves saving, but Chris argues “he’s family” and proceeds inside. After, Adrian completely fails to conceal his super-secret identity when Adebayo instantly recognizes his voice. And limp.

When Chris explains to his dad how and why he got framed, Auggie grumbles, “I shoulda slit your throat as a kid,” adding that whereas he truly loved Chris’ brother, “You were a blob of flesh I felt nothing for.” Chris suggests he is a “grower not a shower” as a son and asks his dad to keep mum about what ARGUS is up to, to which Auggie semi-conceded, “I’m no rat, but first chance I get, I’m spilling everything.” Meanwhile outside, Adebayo tells Adrian that while Chris is a good man, his father very much is not — and that Chris is never happy when his father is around. As such, “I wish there was some way to make him… go away,” she says, planting the idea in Vigilante’s head to cause a commotion by the guards’ lunch area and get himself heaved into lockup, alongside Auggie.

When Peacemaker and Adebayo return to the video store (sans Adrian), a KO’d Economos explains that Judomaster got free and fled out a nearby window. Declaring “Rematch, motherf–ker!,” Peacemaker gives chase and slugs it out in the parking lot outside with the jolly green not-giant, all as the two trade taunts about body sizes. When Judomaster at one points gains the upper hand, a shot rings out, and Peacemaker sees that Adebayo fired the shot — her first ever. “I was gonna win that fight!” he grouses, before they lug the barely-alive Judomaster back inside for another patch-up job from John. 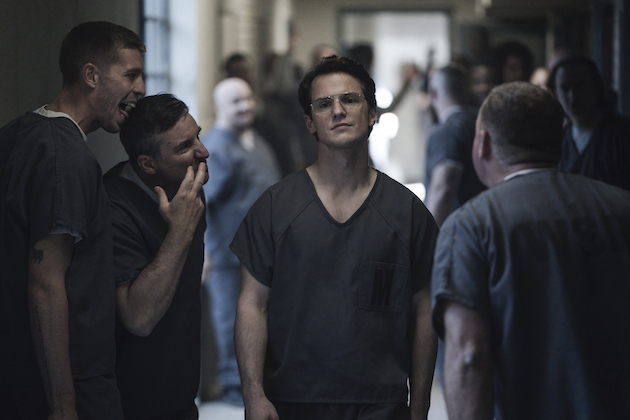 Seeing Adebayo shaken by her first shooting/near-kill, Harcourt notes that it’s “good it hurts” — otherwise she’d be just like Amanda Waller, who “treats humans like nothing” (unaware of Adebayo’s tie to the ARGUS boss). Harcourt then gets wind of the Vigilante hit that Adebayo sorta-accidentally set in motion, and Murn in turn chews out his “Apple Dumpling Gang” of screw-up agents. He orders Economos to get Chase out of the system ASAP, lest they wind up down a man. Adrian meanwhile spoils for a fight in lockup, inviting Auggie and his pals to each share something they are grateful that Black people did. Fisticuffs indead break out, and Adrian easily dispatches with Auggie’s three associates, before guards arrive to shut things down. Auggie then beckons to the guards that he has urgent information to get to the police.

Peacemaker finds Harcourt at that same bar, and this time asks her what his file said about what his dad did when he was a kid. With some hesitation, she reveals that it said Chris was trained to kill at a very young age, and that his brother died under mysterious circumstances — and “you were involved.” Returning home, Chris uses bong hits and bourbon to soothe this new emotional pain, before laying down on the floor as a montage shows Adrian being released… Economos watching over Judomaster… Adebayo dodging a call from the wife… and a stone-faced Murn at home watching TV. Interspersed are flashbacks to his childhood (where his Dad hands him a blade to stab a tied-up stranger), to Rick Flagg’s death in The Suicide Squad, and again to his childhood (where his brother collapses to the ground, seizing and with his mouth foaming).

In the closing moments, both Eagly and the jarred-up (and possibly stoned!) Butterfly creature that Peacemaker in fact quietly kept sidle up to a sad Chris… Harcourt arrives at the cop shop to drive home Adrian, who worries he “made things worse” by agitating Chris’ dad… and Adebayo finds in the Goff files a business card for the same company as Butterfly Annie’s work ID. Adebayo calls Murn with her good news, and he says he’ll be right there — after, we see, he finishes eating a bowl of golden goo with his long, purple Butterfly tentacle…

What did you think of Peacemaker Episode 4?