It’s the beginning middle of the end for The Walking Dead. Ahead of the AMC drama’s return with Part 2 of its three-arc final season, the network on Wednesday released not only Season 11B’s head-turning key art but its action-packed trailer.

In the clip, which you can watch above, Commonwealth governor Pamela Milton (Laila Robins, debuting at last) declares that “brick by brick, block by block, we’re putting the world back together the way it was” — which doesn’t necessarily sound like a good thing to one of our embattled survivors. Elsewhere, Negan seems to suggest to Maggie that there will come a day that the choices she makes won’t be all that different from the horrifying ones that he did as leader of the Saviors. 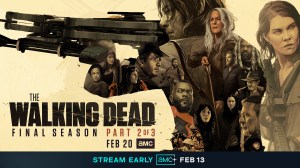 As the Season 11B key art makes apparent, our heroes are on high alert heading into the next leg of their journey, which kicks off on AMC Sunday, Feb. 20, at 9/8c (and a week earlier on AMC+). The official logline reminds us that when we reenter the fray, “many of our heroes [are] fighting imminent hellfire under Reaper attack, while others battle Mother Nature’s torrential wrath in Alexandria. For all, their world is literally crashing down around them.

“Meanwhile, life in the Commonwealth is not as idyllic as it seems,” it goes on. “For some, hope will be renewed. Others will be pushed past the point of no return.”

As you’ll see in the trailer, among those others seems likely to be Eugene, whose crush Stephanie goes missing. A coincidence, after he decked Pamela’s snotty son? Doubtful. To check out the preview, press PLAY on the video above, then hit the comments with your best guesses for which character(s) won’t survive the season.