High School Musical: The Musical: The Series is recruiting a trio of Disney Channel heavyweights for a summer-set season that pays homage to some of the network’s timeless classics.

Donnelly will play college student Val, a camper-turned-counselor who is choreographing Frozen, and Earles will play “stone-faced, killjoy” Dewey Wood, the camp’s director. Bleu, meanwhile, will guest-star as himself. 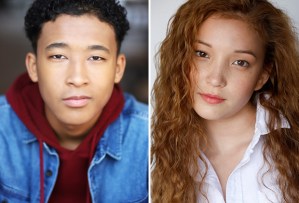 We’re also getting two new series regulars this season: newcomer Adrian Lyles will play Jet, a mysterious new kid at Camp Shallow Lake, and Saylor Bell (I Didn’t Do It) will play Maddox, a techie who “always follows the rules.”

Thought we were finished? Not even close. In addition to the music of Frozen, the show’s third season will also feature more performances of songs from the High School Musical franchise, as well as — wait for it — Camp Rock. [Insert Mitchie screaming here.]

OK, let’s talk: What are your Frozen casting predictions, as well as your general hopes for Season 3? Drop ’em in a comment below.