Venerable actress Debbi Morgan has played dozens of roles on the big and small screen, but muscle memory is a funny thing.

When her former All My Children costar Darnell Williams first showed up on the Our Kind of People set — his episode airs Tuesday (Fox, 9/8c), and his role is being kept under wraps — Morgan’s logic fell away and her heart and mouth took over.

“We were shooting the scene when Darnell’s character walks through the door for the first time,” Morgan reveals to TVLine. “And it was the first time we see this character on the show, and I looked at him and shouted, ‘Jesse!’ The director had to yell cut and everyone fell out laughing. It was hilarious. I knew that wasn’t his name on Our Kind of People but I couldn’t help myself. We worked together for so many years as Angie and Jesse and that’s the first thing that came to my mind.”

Morgan adds that reuniting with the other half of her All My Children super-couple was not only fun, but fortifying. 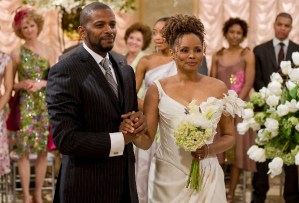 “I was beyond excited to work with Darnell again,” Morgan shares. “He’s like family to me. We always have so much fun because we have such a close-knit relationship. He even gave me away when I married my husband Jeff.”

As Our Kind of People fans know, Morgan plays Angela’s striving Aunt Piggy on Karin Gist and Lee Daniels’ sexy and glamorous drama, which explores the Black, rich and ruthless who call Martha’s Vineyard home. In the Jan. 11 installment, Piggy went to the police station to turn herself in for murdering her boyfriend Darius in the 1980s. But Williams’ mystery character suggests there is a lot Piggy doesn’t know about Darius’ demise.

“When I first read the script, I felt like, ‘Wait a minute? Why should Piggy go to jail after all these years?'” Morgan recalls. “But Piggy is evolving as a person and doesn’t like Teddy hanging over her head… She thinks turning herself in will free her from her past so she can be at peace. She took a human life and it’s weighing on her.” 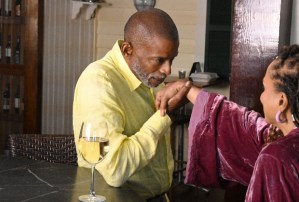 With so many twists and turns involving Eve’s past, Teddy’s countless secrets and the relationship between Olivia, Rose and Eve, Morgan says she’s optimistic more people will tune in for the final two episodes of Our Kind of People and that Fox will renew the show for Season 2.

“I’m really hoping our show gets picked up and given a second chance,” Morgan divulges. “We started out shaky but the stories are grounded and popping now and these last two episodes are really, really good.”

“Unfortunately, we’re not doing well in live broadcasts but we’ve been killing it streaming on Hulu,” she surmises. “I hope Fox is considering that progression and that that’s enough to bring us back. Our Kind of People is a part of this new Black renaissance on TV and film that allows us to marinate in our Blackness and celebrate our skin, and our hair, and our culture, and I don’t want that to end.”

Are you excited about Morgan and Williams’ (aka Angie and Jesse’s) reunion? And do you think Our Kind of People should come back for a second season? Drop your thoughts in the comments.