Blink and you might have missed Leighton Meester‘s stealth cameo in the How I Met Your Father premiere.

TVLine has confirmed that the Gossip Girl alumna plays Meredith, ex-girlfriend of Chris Lowell’s Jesse, in the #ProposalFail video seen in Episode 1. She will recur throughout the first season of Hulu’s How I Met Your Mother sequel series, but additional details — including when her character might resurface — are being kept under wraps.

During the premiere, which was released Tuesday, struggling musician Jesse explains to Hilary Duff’s Sophie that Meredith, his former bandmate and the one woman he ever loved, rejected him. The aforementioned video shows the moment he got down on one knee and proposed to Meredith at a show. But before he can pop the question, Meredith tells Jesse she’s sorry and she can’t marry him. That’s when Jesse gets up, takes a step back and accidentally falls off the stage. 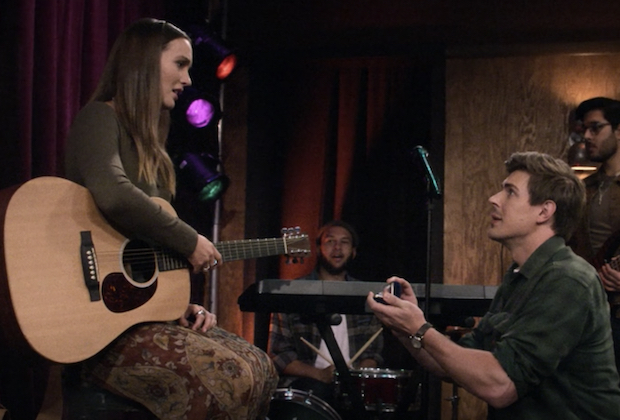 “Now she’s in Europe recording her first solo album,” Jesse tells Sophie. “And I’m known all around the city as Mr. #ProposalFail.”

Meester, best known for her breakout role as Blair Waldorf on the OG Gossip Girl, most recently starred opposite Taran Killam in the ABC comedy Single Parents, which ran for two seasons and ended in 2020. (Fun fact: Killam, who recurred on HIMYM as Gary Blauman, is married to Cobie Smulders — aka Robin Scherbatsky.) Prior to that, she appeared alongside Adam Pally in the short-lived Fox sitcom Making History.

Like her How I Met Your Father character, Meester is also a professional musician. In addition to standalone singles “Somebody to Love” (2009) and “Your Love’s a Drug” (2010), she released a full-length album, entitled Heartstrings, in 2014.

Did you spot Meester in the How I Met Your Father premiere?