Peacemaker in Episode 3 finally got some answers about Project Butterfly, and along the way revealed to us (and his ARGUS handlers) what he actually won’t do in the name of peace.

HBO Max’s offshoot of James Gunn’s The Suicide Squad released its first three episodes on Jan. 13, and the first (detailed here) established how Peacemaker aka Chris Smith, upon recuperating from his injuries sustained during Project Starfish, did not dodge the remainder of his prison sentence but instead was re-retained by ARGUS to target “Butterflies.” Episode 1 introduced ARGUS team members Murn, Harcourt, Economos and Adebayo, as well as Chris’ father, Auggie, and ended with Peacemaker realizing he had hooked up with a metahuman-like Butterfly — whom he used his “sonic boom” helmet to messily eradicate.

Episode 2 largely revolved around Peacemaker’s at-times-clumsy fleeing of that scene without the Evergreen PD linking him to the gruesome kill, and Economos in his haste fudging any evidence to point to… Chris’ father, who upon being thrown into jail was met with reverence by his (white) cellmates, who bowed down to “Hail, the White Dragon!” Peacemaker, meanwhile, in the wake of a three-way with Vigilante and a woman he had held hostage earlier, came to realize that the strange doohickey he grabbed from butterfly Annie’s apartment in fact turned into a spaceship. A tiny spaceship. 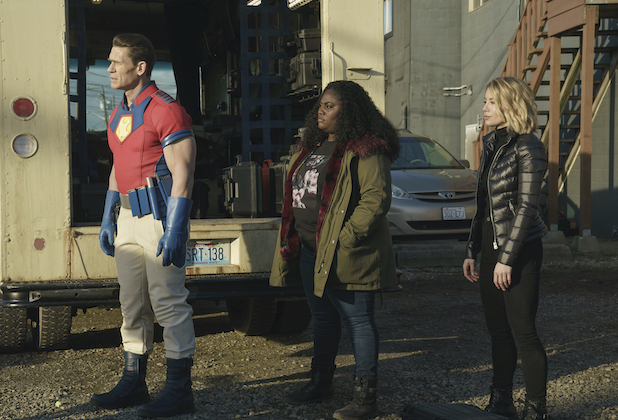 Episode 3 picked up shortly after, with Peacemaker creeped out by the idea that they may be dealing with homunculi, while Murn rounded up the team to pursue their next Butterfly target, U.S. Senator Goff. Along the way, Adebayo debriefed everyone on the senator’s wife and two kids — who might also need to be taken out, if suspected to also be Butterflies — as well as his protection, led by a diminutive snack addict named Judomaster. (Adebayo also accidentally shared a sexted photo from wife Keeya, whom she is now trying the “long distance” thing with, in the name of safety.)

Once staked out on the periphery of the senator’s home, Peacemaker got Harcourt to finally open up/bond with him a bit. But when the Goff family came home, it was showtime. The fam seemed genial enough on the outside, but once indoors it became clear, spying on them through windows, that there was something very wrong with them — including a long, purple something that extends from their mouths to gobble up a honey-like substance.

Upon confirming parents and kids are all Butterflies, Peacemaker couldn’t bring himself to fire off the kill shots, so Vigilante — who had crashed the stakeout, then we forced to stick around — nudged his BFF aside and casually picked off Mom and the two kids. Dad, however, got away, and moments later, Judomaster got the drop on Peacemaker, Vigilante and Harcourt, eventually KOing each. Adebayo meanwhile found herself needed to gun down a regular bodyguard, but couldn’t do it, so Harcourt made the kill. 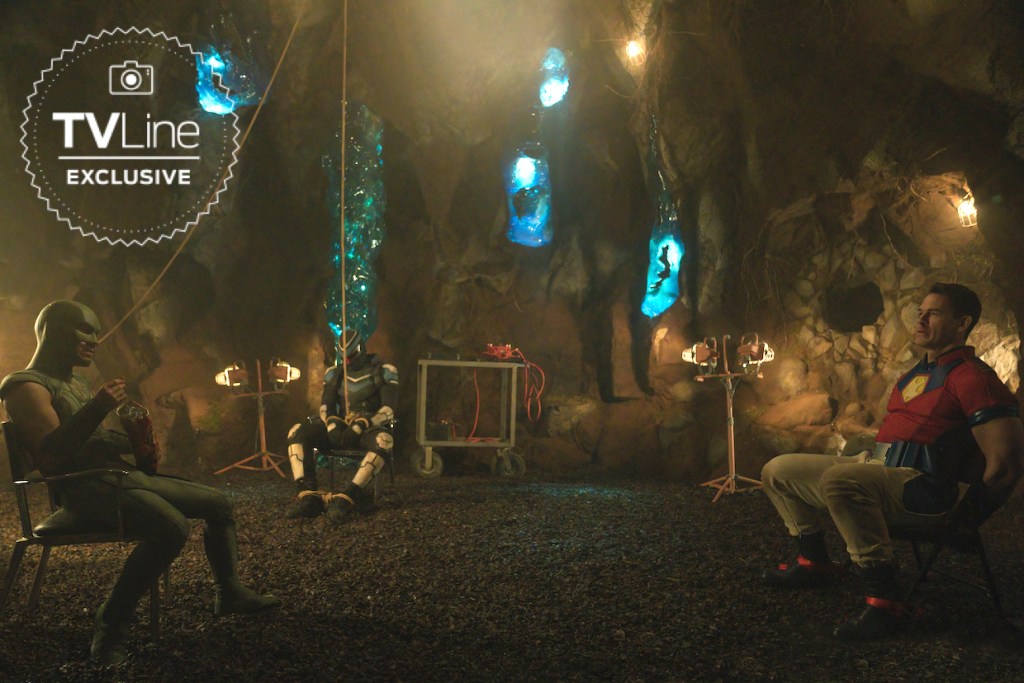 Harcourt, Murn and Adebayo breached the senator’s home to look for Peacemaker (and Vigilante), who they came to realize were being held in some underground chamber. Down in that cave, Judomaster traded taunts with Peacemaker, until the senator arrived to get intel by electrocuting Vigilante and then proceeding to (try to) snip off the masked killer’s pinky toe. Luckily, Murn & Co. (eventually!) managed to set off a charge to blow up the amber-like barrier blocking the entrance to the cave, though the blast nearly did in Murn himself. Peacemaker used the explosive distraction to gain the upper hand and take a shotgun to the senator’s head, after which he and Vigilante laid witness to the butterfly-like alien that had been nested inside Goff’s head.

Judomaster, meanwhile, had been dispatched by the senator, but Economos used the team’s van to T-bone the little guy’s getaway car. Judomaster was seen trying to crawl away from the scene, but Economos stopped him in his tracks, though it took several whacks with a tire iron to KO the guy.

What did you think of Peacemaker’s opening salvo of three episodes? And will you stay tuned?