In Season 2 of Tyler Perry’s Sistas, Gary’s soon-to-be ex-wife Jasmine rolled up on Andi with a couple of lady goons she had paid to rough up the attorney.

Andi fought back as best as she could against all three of her attackers in the parking garage at her job, but she wasn’t able to break free until her girl Fatima rolled up with a Glock and shut down their beat down.

Fast forward to Season 4, and now Fatima could use Andi’s professional and personal support, especially if Hayden presses charges, but will Andi pull up? KJ Smith, who stars as Andi on the wildly popular BET offering, says it may take a moment for Andi to return the favor — if she returns it at all.

“Andi does owe Fatima,” Smith candidly tells TVLine. “But you have to remember, people are not built the same. Just because Fatima has been there for Andi doesn’t mean Andi would do that for her. There are friends who are fighters, and there are friends that run. They’ll call and complain but won’t necessarily fight for you. It’s going to be interesting for people to see what kind of friend Andi really is.” 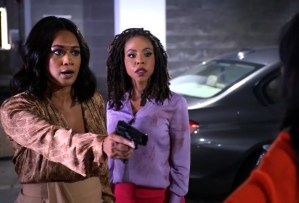 Smith, who is taking on a new role on Power Book III: Raising Kanan later this year, says before fans start to attack her on Twitter, she hopes they will be patient with Andi as things play out this season.

“I don’t think we’ve gotten a chance to see Andi’s evolution as a friend,” Smith observes. “In the first few seasons, Andi wasn’t as present as she could’ve been because she was so wrapped up in her relationship with Gary. She was constantly disappointing her friends by showing up late and leaving early. She became more present but was down on her luck. Now that her life is on the come up, what kind of friend will she be? There are women on this planet who are like this. I know some. They have to evolve into better friends.”

Part of the problem, Smith divulges, is Andi’s loyalties to Fatima and Karen. She loves them both for different reasons, but needs to be more honest.

“If you can’t evolve with your friend group, is that your friend group?” Smith wisely asks. “Andi will eventually become a better friend, and I love it. You have to learn your friends’ love languages. She is still figuring that out. Andi sees the potential in Fatima and Zac, and she doesn’t want to lie about that to Karen when Zac treated Karen like a dog.” 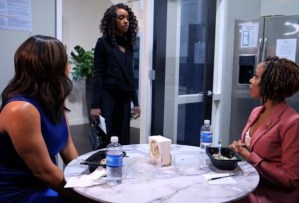 In the end, Andi could lose Fatima and Karen’s friendship if she isn’t careful.

“It’s tough being diplomatic one hundred percent of the time, especially when you feel like someone is questioning your loyalty as a friend because they’re jealous,” Smith surmises. “That’s a worthiness issue. Karen needs to feel worthy of love and friendship and see that Andi can be friends with Fatima, too. Fatima saved Andi’s life, and they value each other. Hopefully, Karen will grow to see that and let go of the past.”

Are you worried about Andi and Fatima’s friendship, and do you think she will be there when Fatima needs her the most? Drop your thoughts in the comments.