With its 10th and final episode released this Thursday, HBO Max’s Station Eleven closed the book on its dystopian saga about the aftermath of a brutal pandemic.

In it, we learned that Jeevan (played by Himesh Patel) was the doctor called upon by the Severn City Airport community to check on, and ultimately lay to rest, conductor Sara (Lori Petty); Kirsten (Mackenzie Davis) arranged for Elizabeth (Caitlin FitzGerald) to play Gertrude in the Traveling Symphony’s staging of Hamlet, as a means for her to finally talk with long-lost son Tyler (Daniel Zovatto); Clark (David Wilmot) came to realize who exactly Kirsten was; and Miranda (Danielle Deadwyler) was revealed in flashback to have quietly played a key role in saving many early-pandemic lives. 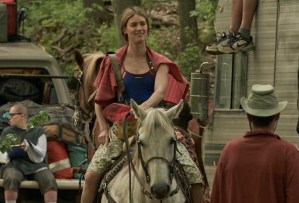 TVLINE | In retrospect, would you have put an advisory ahead of the first episode, saying that Hamlet was required reading?
PATRICK SOMERVILLE | [Laughs] Absolutely not. I think what we were always trying to do is make a show where if that was your thing, you would have the added context along the way, but if it wasn’t your thing, you certainly didn’t need to come holding Hamlet knowledge in order to have the experience. And if you watch the show through, they only do one scene over and over again, and that  kind of teaches you the scene along the way, via our characters. That was always what was important — don’t make me care because “capital S Shakespeare”; make me care because I care about Kirsten and because I care about Tyler.

TVLINE | I caught that Star Trek Easter egg in an early episode, based solely on the Stardate overheard on a TV [from the episode “The Conscience of the King,” about a traveling Shakespeare troupe]. Whose idea was that?
SOMERVILLE | Well, in the Station Eleven book, the phrase “because survival is insufficient” actually comes from an episode of Star Trek: Voyager, and [author] Emily has talked about how that’s a perfect demonstration of the high/low of Station Eleven, and how valuable stuff can come from absolutely anywhere, whether it’s Shakespeare, Star Trek… Like, you can get it anywhere, so long as you use it in the right way. And then the nice advantage of making a show with your studio being Paramount is that you maybe have a bit more access to some stuff that you can put on the screen. So, I knew about that famous Star Trek episode about Shakespeare, and when it came time to find out what episode [young] Kirsten was watching, it’s just a little nod to the fact that Star Trek already existed in the Station Eleven novel, and this was another way to do it. 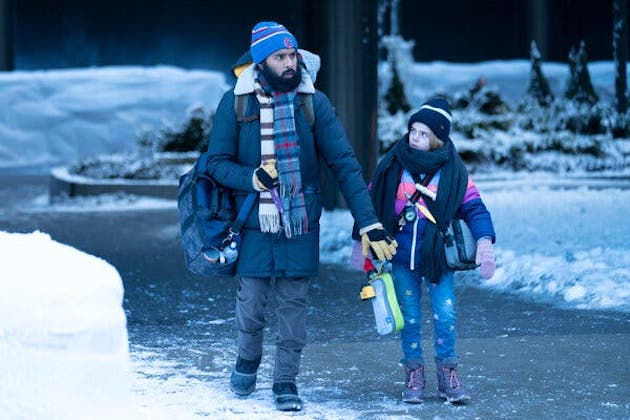 TVLINE | How did you decide what all needed to be added for the TV series that wasn’t in the book, such as the extended isolation with Jeevan and young Kirsten, or the pregnant women episode?
SOMERVILLE | We were always looking for ways to knit Jeevan and Kirsten’s stories together a little bit deeper, and that’s because Jeevan, in the novel, is a very compelling character, and the novel also returns to Jeevan at the end, because it was compelling enough to go back and check in on him. Since that was the case already in the book, it felt like a greenlight to find ways to integrate their stories together more intimately. And also, in translating novels to TV, you just sort of need specific stories with people together.

It was also an opportunity to get Jeevan out of his own head for Episode 1 and have someone to play off of in a conversation, and it was a way to complicate the brother dynamic with Frank and Jeevan, to add a stranger and to see a group of people making a new family. And when you have an incredible actor like Matilda Lawler (Young Kirsten) and an incredible actor like Himesh Patel, you put them together as much as you can. You put Himesh together with Mackenzie, as well, as much as you can, to get your biggest bang for your buck.

TVLINE | You started production on this just before the COVID pandemic started. Was the script always the script, or at any point after the real pandemic hit, did you kind of dial back anything, to make it hit a little less closer to home?
JESSICA RHOADES | [Episodes] 1 and 3, which are the most pandemic-forward episodes, I would say, were completed when our real pandemic struck and we were stopped down, and eventually we did come back and shoot in the pandemic. I would say that the scripts and the story remained almost completely as they were originally designed, because the pandemic of our show is so much more “world-ending” than, thank god, our true life, so I don’t think we felt the need to adjust the actual response to the pandemic. But what was important to us was that we all took what we had learned as humans, emotionally, and what we knew about being isolated. We saw how amazing it felt when you found ways to build community, to connect with people, to have moments that felt normal, whether large or small. The show always lived in large and small [moments], but I think we all had learned it, ourselves, through our own experience. 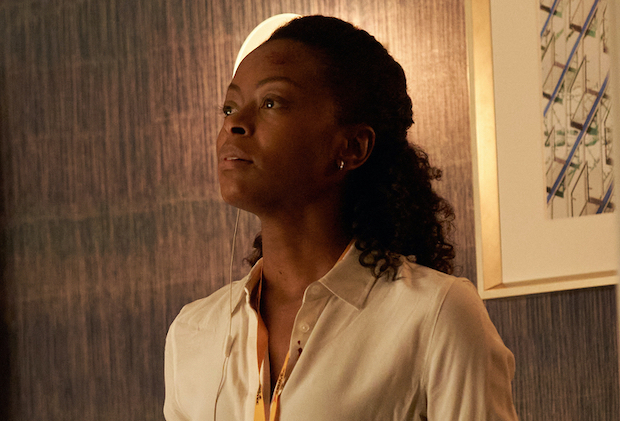 TVLINE | The moment in the finale where we realized that Miranda had placed a phone call to the Gitchegumee pilot, that wasn’t in the book. Talk about the decision to put that in there, because that was such an emotional hit, realizing this incredible but quiet role she played in saving so many lives.
SOMERVILLE | And in a really difficult way, too. That was appealing to me for a lot of reasons. There’s something in the whole show about how artists are living in a different world, and how you’re going to be diminished in our society for being professional artists. That’s the way they usually come for you, like, “It must be nice to just make up things and not have to care about the real world.”  I had a bit of a chip on my shoulder about that distinction, because Miranda is in the real world, and she is making a thing [Station Eleven] in the real world, and I really liked the idea of a two-part story for a character — the first part being her time imagining, and maybe some of the destruction that that wrought in her personal life.

But that story didn’t feel fair to me unless there was a Part 2, which was when she completed that [book], she opened her eyes and looked out at the world, saw she had a few hours left to live, but what can you do to help? Now that that project is complete, what do I have at my disposal to make a difference, to somehow make things better? And in terms of total hours left alive and total good done, Miranda’s second half of the story is quite heroic and brave. I think she couldn’t have done Part 2 if she hadn’t had done Part 1. It always felt like Miranda needed to have a causal impact on the characters we had gotten to know, to really complete what I think is a more true portrait of an artist.

TVLINE | Something I tweeted at one of my peers, early on in the season, was how I kind of love the idea that one thing that survived all this was live theater.
SOMERVILLE | Well, it makes sense. One of our writers, Sarah McCarron, is in the theater. She was a mime, and she’s done performance her whole life, and she was always saying that this makes sense because you don’t need anything to put on Shakespeare. That’s why it’s pandemic-proof. You don’t need sets, you don’t need even lighting. Like, it’s all here. Yeah, [Shakespeare] talks a lot, there’s a lot of words, but because of that you can do it anywhere, with anyone, in any context, and it’ll work — and there’s something awesome about that to me. It’s not just because Shakespeare’s fancy that it’s here. It’s because Shakespeare’s sort of apocalypse-proof. You don’t need a bunch of money to put it on. You just need some people who can read and remember.
RHOADES | Live music survives, too. The gather-around-the-fire hootenanny, telling stories. And the original music, the folk songs sung by the Traveling Symphony, those were written by Patrick and Dan Romer. Those are original songs as artists would create ways to tell the story of what they’ve lived, as folks songs have always been. 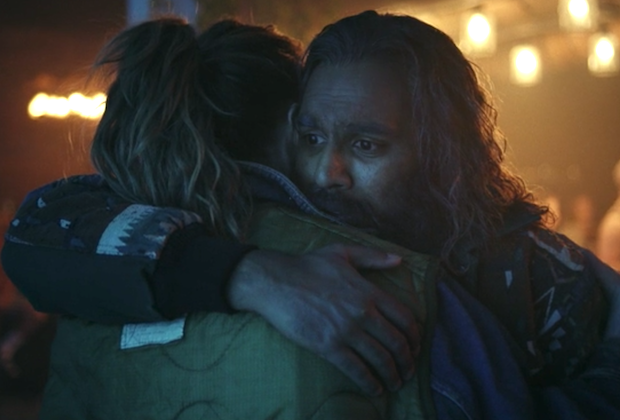 TVLINE | So I’m watching the finale, and when Jeevan and Kirsten have that near-miss in the future, I yelled a couple expletives at my screen. Were they always going to reunite in the finale, or did you entertain any ironic, tragicomic scenario where they just didn’t?
SOMERVILLE | They were always going to hug. The second idea was to add the near-miss. I’m not the kind of storyteller that’s going to dangle that and then not give it, but I think it’s hard to give it in a way that’s as satisfying as it should be unless you talk about the danger of the near-miss, because we all know that one, too, you know? There’s no way in Hell I was ever going to make the show without that hug.

TVLINE | I was kind of hoping we’d get a bit of a postmortem from each of them — like, “I gotta tell you about the wolf, and the department store full of pregnant women, and…”
RHOADES | But you know they did that. That did happen.
SOMERVILLE | Overnight. But the reason that it’s not in the show is because you already know it. We didn’t need to see that, because you already saw it, so we skipped that and got to the goodbye, the heart of the matter, instead, because I think that’s the thing that was new for both of them, the chance to say goodbye knowing they’re saying goodbye to each other. That’s what each of them lost [20 years ago], so the last scene in the show lets our two leads have the thing that everybody didn’t get to have. 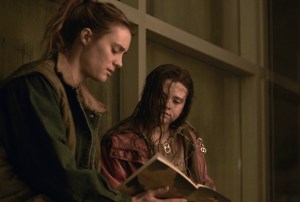 TVLINE | We saw Kirsten talk the one bomber girl, Haley, out of doing whatever she was setting out to do, but the preceding scene suggested there were multiple kids marching towards the building with landmines. Did they just bail, or did I misread that?
SOMERVILLE | No, you didn’t. They were there at the end when Clark’s saying goodbye to Elizabeth and Tyler, waiting for an order that never came. And the reason it never came is because Kirsten had that conversation with Haley.

TVLINE | And then lastly, for each of you, what was your favorite sequence from the series?
SOMERVILLE | My favorite scene in the whole show is the last scene of the show. [Kirsten and Jeevan] walking and saying goodbye.
RHOADES | There are so many sequences that move me and push me to tears or make me laugh, but to me, it’s the entire “Midnight Train to Georgia” — from when Deborah starting to sing, her reaction with “the Pips” behind her, all the way through the hug, and even during the hug. Again, I can only appreciate this on the 11 thousandth viewing, but to me, in the back of it you see Dan, the new member, is hugging Chrysanthemum … Like, this a family that just lives, and for me, every moment in that sequence strikes a chord.