The producers of Hulu’s How I Met Your Father would really like you to not call it a reboot. Instead, they say, it’s a sequel to CBS’ long-running sitcom How I Met Your Mother — and of course, they’d like it to run for nine seasons, too. But having seen the first four episodes (premiering next Tuesday, Jan. 18), I have to say it: This is a reboot! Yes, there are a few passing connections to the original series I’m not allowed to reveal yet, but they’re just superficial, at least so far. This is essentially a new take on the same story… and unfortunately, one that doesn’t quite live up to the original.

It’s hard to remember now, after that dumpster fire of a series finale, but How I Met Your Mother was actually a pretty good show for most of its run, putting a few new touches on the standard sitcom formula and creating something both fresh and familiar. It helped that its core cast was so talented, and How I Met Your Father boasts a talented cast of young actors, too. But the material doesn’t rise to their level. It lacks the sharp wit that made How I Met Your Mother so appealing, and it relies too heavily on sentimental schmaltz that doesn’t feel earned. 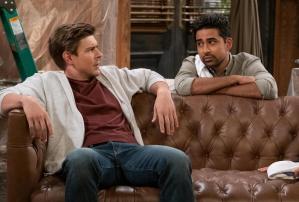 Hilary Duff stars as photographer Sophie, who, in flash-forwards to the year 2050 (where she’s played by Kim Cattrall), is telling her off-screen son “the unabridged version” of how she met his father… with all “the sexy bits” included. Back in present day, Sophie is still single and just wants to meet the right guy already. In the premiere, she meets a lot of them, including her Uber driver Jesse (GLOW‘s Christopher Lowell), whose rejected marriage proposal went viral, and his pal Sid (God Friended Me‘s Suraj Sharma), who owns a bar that serves as a convenient hangout for the crew.

Duff knows the rhythms of TV comedy well and serves as a sturdy anchor for this ensemble, which also features Francia Raisa (grown-ish) as Sophie’s wild-child roommate Valentina and Tien Tran as Jesse’s lesbian sister Ellen, who moved to New York from Iowa “to ask out Kate McKinnon.” The cast is plenty likable, but the punchlines they’re given are lame, with lots of tired Tinder jokes, and the laugh track is loud and distracting. (That’s one aspect of HIMYM they could’ve left in the past.) How I Met Your Father has a real CBS sitcom feel to it, somehow, despite being on a streaming service. It does get a lot racier than HIMYM, though, with a sex toy mishap that would never play on CBS. 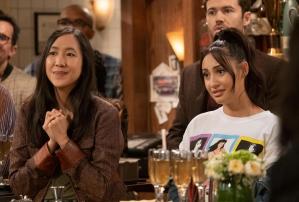 It all makes sense that you learn that creators Isaac Aptaker and Elizabeth Berger hail from This Is Us: They lay it on thick, giving the characters big emotional monologues set to strummy Bon Iver music. (HIMYM got serious at times, too, but they earned it over time. The ratio of comedy to drama here is just out of whack.) Plus, the mystery of who the father of Sophie’s kid is isn’t all that compelling — especially when we know how torturously long it got dragged out the first time around. Who wants to go through that again?

By the fourth episode, How I Met Your Father does start to find its footing and show glimmers of promise; Josh Peck is a nice addition to the cast as vice-principal Drew, another possible contender for Sophie’s heart. And there are times when the cast’s considerable charms make the whole thing work. But at this rate, we may have to wait (for it) a long time before it becomes legendary.

THE TVLINE BOTTOM LINE: Hulu’s How I Met Your Father has a strong cast, but lame jokes and an excess of schmaltz make it fall short of the original.