This week on The Book of Boba Fett, the true threat to Boba’s dominion came to light, all as he and Fennec added to their ranks. Plus, a Mandalorian character cameo!

Coming out of last week’s unexpected face-off with the Hutt twins, Episode 3, “The Streets of Mos Espa,” opened with palace droid 8D8 giving his master and Mistress Fennec a recap of how things shook out in the wake of The Great Sail Barge Disaster of 4BY. With a power vacuum created by Jabba’s demise, Bib Fortuna assumed the mantle, watching over the Trandoshan, Aqualish and Klatooinian crime syndicates as they divvied up Mos Espa — and all as he lined Mayor Mok Shaiz’s pockets. With Boba now claiming power, everyone is waiting to see what sort of underworld boss he is, 8D8 says.

An audience with Boba and Fennec is sought by visitor Lortha Peel, a water broker (played by Stephen Root) who says that some “insolent,” cybernetic-enhanced youths have been stealing from his inventory. And if Boba wishes to command the respect that has thus far eluded him, Lortha Peel dares to say (“I am insulted on your behalf!”), he will intervene.

That night, Boba, Fennec and their Gommorean muscle head into the workers district to confront said band of youths, led by a plucky lass (named Drash and played by Yellowjackets‘ Sophie Thatcher). Drash & Co. recognize Boba but cower not at all, instead arguing that the water monger is grossly overcharging — especially with those, like them, who can’t find work. Learning that Lortha Peel has been asking for a month’s wages for but a week’s worth of water, Boba offers up a fraction of what the kids owe, orders the broker to slash his prices, and then “invites” Drash & Co. to work for him. 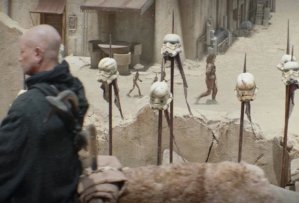 Back at the palace, Boba hits the Bacta tank, and this week’s memories are of when he rode a Bantha into Mos Eisley to visit the Pyke syndicate boss (voiced by Phil LaMarr). (As Boba rides through the spaceport, The Mandalorian‘s Peli Motto and her pit droids can be spotted passing by in the background; see screenshot.)  Boba hits up the Pyke for protection money, and while in principle the Pyke is happy to oblige, he explains that he is already being charged by another party — the Nikto biker gang, some of whom Boba clashed with at Tosche Station last week. Boba assures the Pyke boss that the Niktos will be no further concern, and that his protection fee is to go to the Tuskens (and the Tuskens only) from herewith. 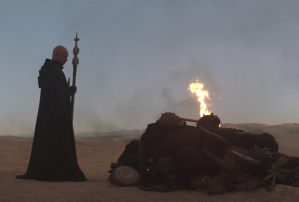 Alas, when Boba returns to camp, he discovers that his adoptive Tusken family have all been slaughtered, and their tents torched. Painted onto one of the charred tents is the “JL”-like tag he saw the bikers spray-painting on a moisture farmer’s hovel in the premiere.

Back in the “present,” Boba is violently yanked from his Bacta tank slumber by the furry mitts of Krrsantan, the gladiator Wookiee in the Hutt twins’ charge. Boba is tossed around like a rag doll by the Wookie, but gets the occasional, cursory lick in. (Keep in mind, Krrsantan is imbued with a Wolverine-like endoskeleton.) Drash & Co. arrive on the scene and employ their assorted, distinct weaponry to fight Krrsantan, with a modicum of success. The clash then tumbles down the stairs to the throne room, as the Gommoreans join in — and eventually, Krrsantan falls prey to the Trap Door in the Floor trick and falls into the Rancor-less Rancor pit.

The next day, Boba and Fennec are visited by no less than the Hutt twins, who come bearing news (they are about to hightail it out of “the worthless rock” that is Tatooine and return to Hutta)… a gift (a Rancor calf, in the charge of a keeper played by Danny Trejo)… and some intel (that Jabba’s territory had been promised to “another syndicate,” by Mayor Mok Shaiz). Boba in turn offers them back Krrsantan, but the Hutts decline, so Boba sets the Wookiee free.

Later, Danny Trejo’s character schools Boba on the Rancor, and how these big, battle-ready brutes are also very loving animals that imprint on the first being they see after the calf’s blinders are removed. Boba expresses his wish to one day ride this Rancor; the keeper says that will take time and determination, but sets the ball in motion by removing the blinders and having the calf imprint on a doting Boba. 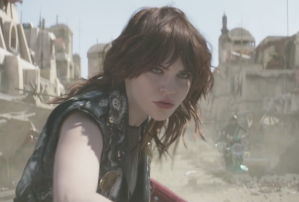 That day, Boba, Fennec and their cybernetic backup gang head into Mos Espa to confront the mayor. The majordomo hems and haws but agrees to get them some facetime with his boss… but then skedaddles out the back door and into a landspeeder. Drash & Co. give chase on their bikes, up, down and around the streets of Mos Espa, knocking over many a fruit cart (to the late Roger Ebert’s delight). Upon eventually crashing and being cornered, the majordomo ‘fesses up that the Mayor is “gone” — and in alliance with the Pykes.

One somewhat confusing director’s cut later, Drash’s pal Skad (who has an enhanced left eye) observes and reports back to Boba’s palace that a starliner has landed in Mos Espa, from which at least a dozen Pyke warriors disembarked.

“These are just the first wave,” Fennec tells Boba. “They’re going to war.”

“Then we will be ready,” Boba attests.

What did you think of Episode 3, “The Streets of Mos Espa,” which was directed by showrunner Robert Rodriguez and written by Jon Favreau?