Just three legs into Season 33, The Amazing Race hit teams with an unprecedented bombshell: For the first time in the show’s history, production was suspended due to the COVID-19 pandemic.

It was February of 2020 when the show filmed Wednesday’s episode, during which teams hustled and bustled through Glasgow, Scotland. But before we get to Phil’s shocking announcement and sneak peek as to what the rest of the season will look like, let’s recap Episode 3 titled, “Who Has This One in the Bag?”

As the teams arrive in Glasgow, they discover it’s time for one the show’s most formidable challenges: driving stick shift in a foreign country! Teams must get themselves across the city to Òran Mór to find their next clue. Ray and Akbar experience hiccups right from the get-go, while Natalia and Arun hit massive confusion on the highway. But while other teams struggle, Kim and Penn have little trouble finding the first clue box.

ROAD BLOCK | In “Who thinks they have this one in the bag?,” teams must assemble a bagpipe and play a note for the length of a traditional Scottish anthem. The assembly looks tough, to say the least, but Kim passes inspection (and her “performance”) on the first try.

After completing their task, the Holderness family, plus Ryan and Dusty, race to Macfarlane Serasen Fountain in Alexandra Park to find a clue to their next…

DETOUR | In “Kilt,” teams must don the traditional garb and perform a famous song on stage, or they can choose to go whiskey barrel-making in “Rebuilt.” Ryan and Dusty head for the barrels, while Kim/Penn try their luck in the theater.

After completing her bagpipe task, Natalia makes the questionable decision of helping a couple other teams, but as she and her dad Arun stop for directions, those teams pass them by. 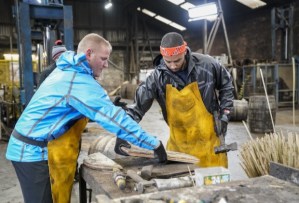 While everyone else works hard at the bagpipe task, Penn botches their first performance of the detour. At the barrel task, Ryan and Dusty and Anthony and Spencer race toward the finish line, but on the tails of Kim and Penn, who wind up giving a Grade A performance at the theater.

Raquel and Cayla, Natalia and Arun, Connie and Sam and Ray and Caro show up to the barrel task, while twin sisters Lala and Lulu head to the theater. But Natalia and Arun admit defeat and switch detours! Will they have enough time to avoid elimination? Luckily for them, Akbar and Sheridan, and Taylor and Isaiah are both in rough shape and are seemingly way, way behind the pack. Surprisingly, both of those teams finish their performances ahead of Natalia and Arun. They finally complete the task, but Arun is teary-eyed, thinking that he failed his daughter.

PIT STOP | Leg 3 ends at the University of Glasgow, the fourth oldest university in the English-speaking world. Kim and Penn come in first place, winning a trip for two to Cape Cod, Mass. Ryan and Dusty take second place, while Anthony and Spencer arrive in third. But who came in last? Natalia and Arun, who are then sadly eliminated from the race.

But the episode doesn’t end there. As teased in last week’s previews, it’s Feb. 28, 2020, when Phil gathers the teams for a special rendezvous. He announces that for the first time ever, they’re sending everyone home and suspending the race. “We want to see you get home safe to your families,” he tells them. Nineteen months later, the racers are back in St. Gallen, Switzerland (gee, that was fast!), as Phil welcomes them back to the competition. “The world is waiting for you once again,” he says.

And the previews for next week, a few teams are missing in the lineup (I spot only five of nine teams present, if that wide shot is to be believed), and Phil announces that a few familiar faces will be taking their places! As for who the returning players are, we’ll have to wait until next week to find out.

Who do you think will be joining Season 33? Sad to see Natalia and Arun go? Sound off in the Comments!