The only characters on Tyler Perry’s Sistas who know for sure if Hayden is dead or alive are Fatima’s goons and Hayden himself. The rest of us will have to find out when the soapy and addictive drama airs this Wednesday at 9/8c on BET.

Until then, a video of behind-the-scenes footage from Season 4 has been circulating all over the interwebs ever since the receptionist told Andi and Fatima that their coworker Hayden had been found dead in the garage in last week’s season opener.

While some celebrated Hayden’s passing in some of the funniest tweets, memes and GIFs known to man — someone even cobbled together a funeral program — others chose to hold out for confirmation because of the aforementioned footage. 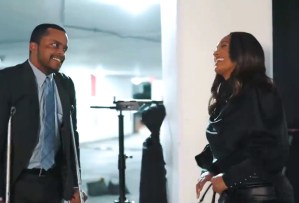 Chris Warren, the actor who costars as Hayden, can be seen in one frame resting on crutches and laughing with Crystal Hayslett, who stars as Fatima. His face is bruised like he’s been badly beaten up, but he’s clearly alive and wearing a different suit than the one he had on in the Season 3 finale. Fatima’s dress is different, too.

There is also a shot of Warren, Hayslett and KJ Smith (who plays Andi) smiling and posing for pictures. Another tell-tale sign is a scene where Fatima is shown breaking out the windows of a car with a bat and then chasing a man who looks a lot like Hayden.

If that is in fact Hayden in the chase sequence, the larger question is: Why would Hayden fake his own death? And how long will it be before Zac and Fatima, aka “Zatima,” learn the truth? Will Andi still have to represent them legally, and if an annoying Hayden is still among the living, does that mean fans will have to continue to suffer through his antics? 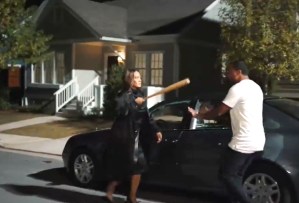 After all, there is a reason fans celebrated his possible demise. Also, where is that receptionist getting her intel? Our guess is Hayden called and pretended to be the police, but who can say? Whatever the answer, you can bet it’s going to be a wild and entertaining ride.

Do you think Hayden is deceased? Drop your thoughts in the comments.