The titular character on The CW’s new DC comic-book adaptation Naomi doesn’t need superpowers to be popular or cool. As viewers saw in Tuesday’s premiere, all Naomi has to do is bop into parties and do a skateboard trick or two before school, and she’s greeted with cheers and dap.

In fact, her newfound abilities actually seemed to cramp her style, make her dizzy and open up a whole new world of questions she wasn’t ready to ask or answer. The revelation began shortly after the high schooler abruptly left debate club to chase a Superman stunt on the main street of her Pacific Northwestern town.

But when she got near town square, a buzzing sound in her ears made her faint, and when she came to, Superman or whatever the kerfuffle was had ended, and she had to ask people what they saw in order to post something on her Superman blog. Turns out the Black girl nerd has the third top site for the Man of Steel in the world but wasn’t truly sure he was real until the stunt took place.

Things didn’t get any less confounding for the braided and bespectacled beauty. And not only did she faint again at a nature-versus-nurture debate on a nearby military base, but when she ran into Zumbado in the Red River Forest the next day, the force of her powers made leaves levitate and knocked her clear off her feet. Zumbado spoke in riddles and scared the snot out of Naomi, who unintentionally surrendered a metal disk engraved with a foreign language to him when it fell from her hands. Before leaving, Zumbado told Naomi not to believe everything she thought she knew. 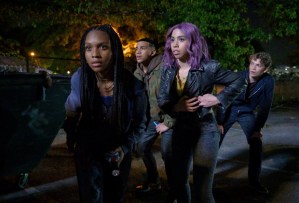 Later, when she and her pals broke into Zumbado’s crappy used car dealership, she discovered the cryptic car salesman had a newspaper published on the same day her parents adopted her. What the what? Naomi also visited Dee’s tattoo shop to ask him about the Superman event.

At first, Dee said he staged the affair involving Superman, whom he seemed to know, but Naomi learned he lied about the staging part. When she approached Dee again after narrowly escaping Zumbado’s dealership with her potential love interests Nathan, Anthony and Lourdes as well as her bestie Annabelle and Annabelle’s boo Jacob, the encounter between Naomi and Dee was much warmer.

Dee apologized for being gruff and attempted to be candid and helpful. So Naomi told Dee about the dizziness and the buzzing sound, and Dee insinuated that Naomi is an alien just like him and Superman. An incredulous Naomi didn’t believe Dee at first, but then he sprouted metal wings like a mic drop, and she asked who and what he was. 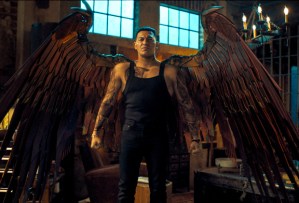 But Dee, who will likely have to guide and mentor Naomi through her superhuman abilities, stressed that his mentee wasn’t asking the right questions, and that’s when Naomi rightly wondered aloud who she truly is.

What did you think of the Naomi premiere? Grade it in our poll, and drop your thoughts in the comments.