In Fox’s new comedy Pivoting, the unfortunate death of a childhood friend forces three women to reevaluate their stagnant lives.

At the top of the premiere, we meet Amy (Happy Endings‘ Eliza Coupe), a producer of a morning cooking show whose job gives her the excuse she needs to parent from a distance. Then there’s Sarah (Designated Survivor‘s Maggie Q), a recently divorced doctor whose gig at the hospital prevents her from relaxing — and from day-drinking, an important adult pastime for those of us over 30. Lastly, Jodie (Once Upon a Time‘s Ginnifer Goodwin), a mom who’s unhappy in her marriage, can’t seem to get over not being asked to prom. As the three come together for Coleen’s funeral, they can’t help but slam their poor friend’s makeup and eye shadow, prompting Amy to later give her husband very specific instructions for how she wants to look when she kicks the bucket.

Wanting to stop taking life for granted, the ladies decide to make good on a whole slew of life-altering decisions. Amy decides that life’s too short and she needs to be a better mom. Sarah has big news, too. She quit her career in medicine on a whim after someone ate her burrito. (Hey, I’d be peeved too! Don’t touch my Mexican, pleaseandthankyou.) Amy calls Sarah’s reaction a psychotic break, but the former doc is resolute, and while she’s out grocery shopping, the workers’ ebullient smiles get her thinking. She applies for a job as a bagger at the grocery store, and despite having zero cashier or bagging experience, she lands the role.

The next day, Amy goes straight home after work (a stark change from her typical arrival, which is after the kids go to sleep), but when she sees the nanny, Gloria, and her children through a window, she panics and bails. A phone call from her husband convinces her to reconsider. As she parks her car once again, her kid slams into her driver’s side window and scares the heck out of her. When she gets inside, she tells her nanny, “My friend died, and I want to be a good mom.” Sounds simple enough, right? 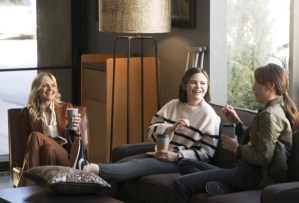 Jodie, meanwhile, is harboring a thing for her trainer, and when he jokes about seeing her back in her skinny jeans, she attempts to squeeeeeeze herself back into them. She hilariously fails and calls Amy for backup. She admits to having a crush on the younger, studly gym instructor, and asks her friend to take her photo from behind, as she lays on the ground pretending to be standing up. (“I’ve lost circulation in my calves,” she moans.) Amy tries to cut Jodie out of the pants, but stabs her in the leg with the scissors in the process. In a panic, she pulls them out, causing blood to spurt out, so it’s off to the ER they go!

In the hospital, Jodie admits she’s been faking it with her husband. A lot. (Of course, Amy and Sarah ask her to demonstrate her fake little sex squeak.) Amy confesses to purposely avoiding her kids, and they all agree their shenanigans are “insane”… and all Coleen’s fault. “If she could see us now, huh?” Jodie asks. “She would die!” Amy says. “Yeah, I realize that’s the wrong thing to say now.” Classic Coupe.

At her baby’s crib side, Amy apologizes to her daughter, and when her husband overhears, she tells him she’s not cut out for this. The baby then calls for “mama,” which gives her the teensiest bit of confidence she needs in that moment. Their son then asks, “Mommy, are you coming over again tomorrow?” “You mean, home?” she replies. “Yes.” And after a long pause: “Most likely.”

How’d you enjoy the Pivoting pilot? Grade the episode below, then drop some comments!