Warning: The following contains spoilers for the series finale of Dexter: New Blood.

In the series finale of Dexter: New Blood, Dexter Morgan was forced to face the truth.

Although he had successfully evaded his chief of police girlfriend, he couldn’t escape the fact that his code, the one he had followed by the book for years, was undoubtedly broken. As a result, a brokenhearted Harrison pointed his rifle at his own flesh and blood and pulled the trigger. One direct hit later, Miami Metro’s former blood spatter analyst — and the city’s evasive Bay Harbor Butcher — was finally dead. (Click here for a full recap.)

Below, showrunner and executive producer Clyde Phillips talks to TVLine about respecting the legacy of Dexter, the return of Angel Batista and why the murder of Sgt. Logan changed everything.

TVLINE | Did Michael C. Hall know up front that Dexter would be dying, and if so, what was his initial reaction?
CLYDE PHILLIPS | This all happened about two and a half years ago, so I’m not sure if it was the first or second meeting, but he knew early on that Dexter was going to die. He understood that that was the right decision. If Dexter keeps getting out of a jam every single time then we’re doing a superhero show. We wanted to bring as much humanity as we could to the ending of the show, and to say goodbye to the character with dignity and integrity.

TVLINE | Were any other endings ever discussed or considered?
There were no other endings discussed. We always knew that it was always going to be Harrison taking out his father. How he got there was the product of 10 great writers in a writing room for a year and a half coming up with all the nuance and all the psychology of it. It’s a very brutal and intimate moment when this happens, but I think it ends the way it has to end.

There’s a certain inevitability to this. Harrison is very damaged. Living with a serial killer in Argentina. She dies. (There are actually people on the internet who think he killed Hannah. There are also people who think that Harrison isn’t Harrison. There’s all of this stuff out there, I’m sure you’ve seen it.) He broke that wrestler’s arm, he slashed the school shooter with a razor blade and lied about it. He was in the room watching his father kill Kurt. He saw all the death around him in Kurt’s tomb. He joined up with his father to incinerating Kurt. He’s not without his darkness.

TVLINE | Was there ever any pressure from [Showtime’s President of Entertainment] Gary Levine or any other higher-ups to leave things open or to keep him alive?
No, actually. Gary and [Showtime Chairman and CEO] David Nevins and Michael C. Hall were all in agreement. And Michael is an executive producer on the show, and it’s not a vanity title. He’s very active. He’s in music and casting meetings, he’s seen all the cuts and gives notes on them. Saw all the outlines and scripts. We pretty much knew from the beginning where we were going with it, which you kind of do in each season, otherwise you don’t know how to write the intervening episodes. What’s the psychology and subtlety you want to add to it? What’s the easter egg you want to put in there? What’s the justification you want to put in there? In all the shows that I do and when I write my books, I know the ending. That doesn’t mean that if we’re driving across country, we can’t go to Canada or Louisiana, or wherever the characters take us, but we’re still going to get across the country, and get to that ending.

TVLINE | That final scene between Dexter and Harrison is dripping with emotion, and just so heavy. What was the vibe like on set that day?
I’ll tell you a couple behind the scenes things. First of all, the vibe writing it, I was a wreck. Marcos Siega, who’s a brilliant director and a great friend of Michael’s and mine, we were chasing the snow everywhere. If it snowed, we ran to that town and shot whatever scene needed snow. But we also knew we needed a very weighty, important scene between Michael and Jack [Alcott], between Dexter and Harrison, so on a very snowy day, we shot the therapy scene inside. We wanted to shoot a very heavy scene between the two of them so that Michael could test Jack, and Jack could go to a Michael C. Hall master class, and really get them going. 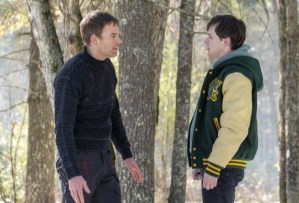 The following Saturday, we did a rehearsal at our studio in Massachusetts. Because of COVID, we couldn’t do it in my office, we had to do it in the bullpen, so we cleaned it out so people could be far enough apart from each other. I had a baseball bat, for some reason, in my office, and Harrison used that as a prop for the rifle. We rehearsed the scene several times. They had questions. Marcos did some staging, and I rewrote some things. They had some ideas, and we agreed on them.

On the day we were shooting the scene, we knew we were doing something important and we were very excited, but it very quickly became… not somber, but sacred. Everybody was very quiet, going about their business. The walkie-talkies were quiet, and then we just let the actors have it. Marcos would say, ‘OK, the cameras we’re using are here, here and here. Be aware of them. Play the scene.’

Another discussion we had was: How does Dexter fall when Harrison pulls the trigger? We didn’t want him falling Christ-like and sacrificial. We didn’t want him falling like an angel. Michael, because he’s such a great actor, just said, ‘My body is going to be disconnected from my brain and I’m not going to have control over how I fall, so let me just fall.’ He fell on his side a little bit, and one leg was over the other, and it felt like a natural death, a natural murder. He had to be in that position all day long because we had to shoot all of the Angela and Jack stuff while he’s lying there. It was a great decision on his part to do it like that.

The set was very respectful. And this was early in the shoot. This was the first month of a six-month shoot, because again, we needed the winter. It was doubly challenging for Jack who was still getting into his role. Thank God for Michael helping him. It took us all day long to shoot and we got it at the last moment of sunlight, and then we were done. Usually when you call it a wrap, everybody starts yelling, but everybody was still very quiet. They were still in the moment. That’s the somber part. We were all very moved by it.

TVLINE | It was great seeing David Zayas back this season as Angel Batista. What was David’s reaction upon finding out that you wanted him back, and what was it like to work with him again?
His reaction was pure excitement, he said yes in one second, as did Lithgow. But having him there, he’s a great guy. I just saw him at the premiere. I’ve stayed in contact with him through all the years. David plays such an important role in the finale, it’s a perfect circle, in a way. Also, it’s the perfect threat for Angela to say to Dexter. That Batista’s on his way up here and, ‘I may not be able to make this Matt thing stick, but you, Dexter Morgan, are the Bay Harbor Butcher.’ And he knows he’s f–ked. 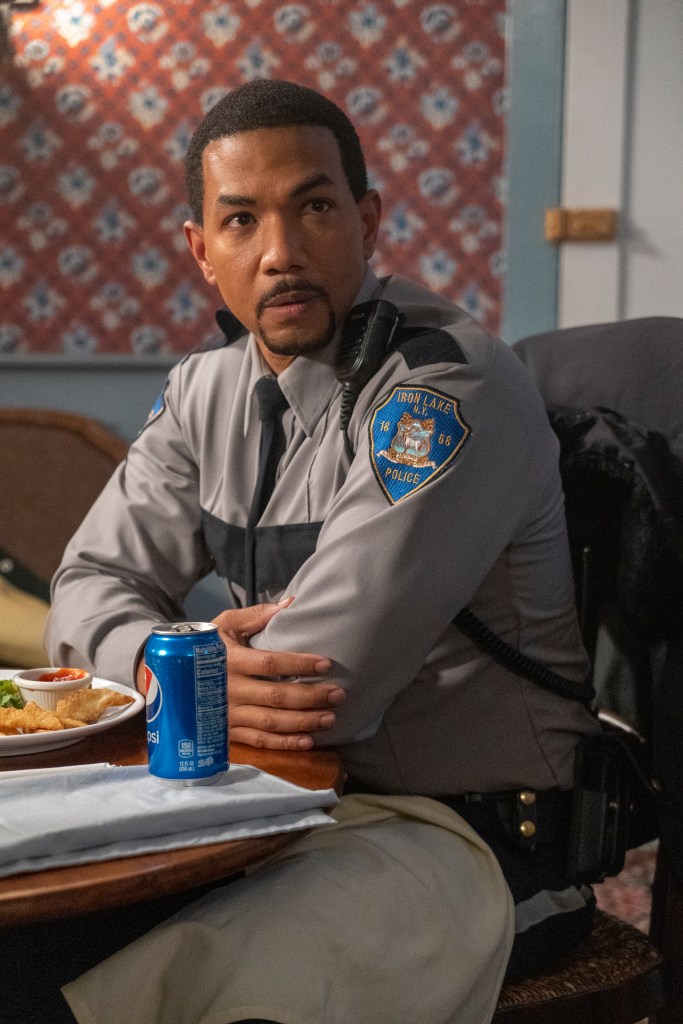 TVLINE | Figuring out that Dexter killed Logan changed everything for Harrison. Can you speak a bit as to why Harrison chooses to take Dexter down versus escaping with the dad he finally connected with?
Dexter’s code is so irrevocably broken that it feels like bulls–t to Harrison. Harrison subconsciously realizes that Dexter is an addict. Dexter’s a murderer. When Harrison talks about killing, he’s thinking, ‘Look at all the lives we can save if we take out this serial killer.’ Dexter never thought like that. Harrison is thinking like Batman. Dexter’s thinking, ‘My code is I kill people who do bad things.’ Dexter says to Harrison, ‘I want to be a better man. I want to be a better father, and I can do that with your help,’ and Harrison says, ‘I’m not your goddamn caretaker.’ That’s what you say to an addict. It’s too late. You have broken the code, and your code isn’t like taking another drink or another drug, your code is murdering people.

Then he yells at him, which is an Easter egg from the pilot, he says, ‘Open your eyes and look at what you’ve done,’ and then we do the flashback to Logan, Lundy, Doakes, LaGuerta, Rita and Deb, and that’s when Dexter realizes he’s right. Then there’s this long, long pause, and Dexter says to Harrison, ‘You have to take the safety off, just like I showed you,’ giving him permission to do this. Urging him, almost, to do it. Harrison’s weeping, he does it, Dexter falls and says, ‘You did good.’ He’s absolving him.

And then there’s Deb, holding Dexter’s hand, that last piece of consciousness that Dexter has. The way I had written it was that Dexter pulls his hand out of Deb’s, but Jennifer Carpenter [who plays Debra] on the day said, ‘Can we try just one where I pull my hand away from him?’ showing that his consciousness is going away. She did it and it was great and we used it. 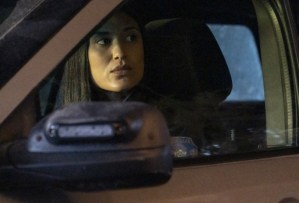 TVLINE | Harrison took down the Bay Harbor Butcher. Was there ever a chance that Angela could have protected him from the law, and that he could have possibly stayed in Iron Lake?
Imagine a 16-year-old kid whose mother was murdered and who’s just shot his own father. Where’s he going to live? That’s 100 years of counseling in a town of 2,700 people. He needed to leave, and Angela covered for him. Angela, who has worried about that murder board in her office for her entire career, (and then discovered them because Dexter sent her there), is so filled with death and sadness. She has an opportunity to do something humane and kind and graceful. She takes responsibility away from Harrison and puts it upon herself and sends him off. She’s a heroine at the end of the series.