Call Me Kat‘s Season 2 premiere reunited the cast of Blossom and established a world wherein Kat Silver and Mayim Bialik exist. (Say it with me: Whoa!)

Blossom Cast: Then and Now 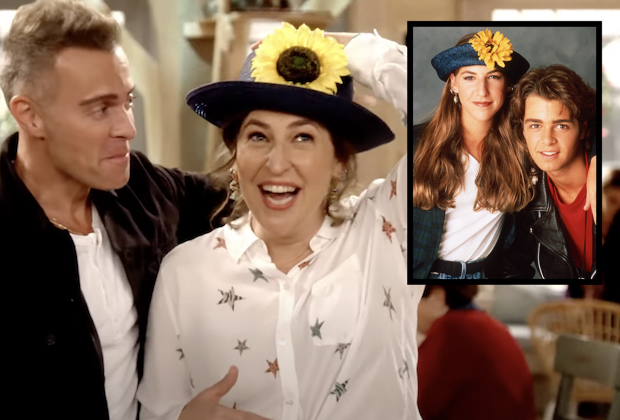 Sunday’s opener also marked the first episode under the direction of new showrunner Alissa Neubauer (Mom), who replaced Season 1 appointee Darlene Hunt during the hiatus. So, did the premiere feel like a step in the right creative direction? Or did it pretty much feel like the same show?

In a moment we’ll ask for your opinionation — but first, a terse recap:

Joey Lawrence, Jenna von Oÿ and Michael Stoyanov appeared as heightened versions of themselves, all in town for a celebrity golf tournament. “These two were on my favorite TV show when I was growing up,” Kat explained, acknowledging Lawrence and von Oÿ and completely disregarding Stoyanov, whose character she couldn’t recall.

“I get it,” a self-deprecating Stoyanov said. “She talked real fast, he was an idiot, and I was just a boring, heartfelt, three-dimensional character.”

Kat obsessed over Joey, telling him that she had his posters plastered all over her bedroom. She also cozied up next to von Oÿ, who rejected Kat’s plea to do the dance with her — you know the one:

After they posed for a picture, Kat turned to the cast and asked what ever happened to the girl with the flower hat. “I heard she was hosting quiz shows,” von Oÿ answered, referring to Bialik’s current side gig as host of Jeopardy! (No mention, however, of her nine-year stint on CBS’ The Big Bang Theory — which, funnily enough, also referenced Bialik prior to her introduction as Amy Farrah Fowler.)

In addition to the big reunion, Call Me Kat‘s Season 2 premiere saw Kat reach an important decision about her love life: the title character chose to continue her relationship with delivery man Oscar, rather than pursue a new relationship with longtime crush Max. Randi, meanwhile, revealed to Phil that she’s been M.I.A. at work due to frequent make-out sessions with Carter. Likewise, Carter confided in Max that he’s been sneaking around with Randi.

What did you think of Call Me Kat‘s Season 2 premiere? Grade it via the following poll, then sound off in Comments.