Are network sitcoms making a comeback? Not too long ago, things looked dire for the genre — NBC didn’t even bother to put a single comedy on its fall primetime lineup — but CBS’ Ghosts, ABC’s Abbott Elementary and NBC’s Grand Crew have proven to be reliable sources of laughs already this season. And that hot streak continues with Fox’s newcomer Pivoting (premiering this Sunday at 8:30/7:30c; I’ve seen the first three episodes), a low-key hangout comedy bolstered by a very strong trio of lead actresses and an irreverent energy that helps lighten up a very heavy topic. 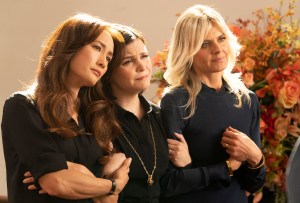 The story centers on Amy (Eliza Coupe), Jodie (Ginnifer Goodwin) and Sarah (Maggie Q), three childhood pals whose close friend just died after a brief illness, and her death makes all three of them rethink their lives and plunge headfirst into big changes. Amy, a workaholic morning show producer, dials things back at work to spend more time with her kids; Sarah, a successful doctor, up and quits to pursue a more fulfilling career bagging groceries; and Jodie, a bored mom trapped in a bad marriage, indulges in a flirtation with her trainer. But yeah, their big epiphanies wear off pretty quickly, and they realize that completely revamping their lives is actually a lot of work.

This is a tricky tone to pull off, finding the comedy in such a brutal tragedy, but showrunner Liz Astrof (2 Broke Girls) manages to squeeze laughs out of the grieving process with a chaotic, quick-witted tone and heavy doses of gallows humor. The three ladies hold a wine-soaked makeshift memorial at their friend’s gravesite… and then realize they’re whooping it up at the wrong grave. (It’s kinda like A Million Little Things, but a lot funnier.) The show allows these women to be substantially flawed and messy, and it resists the urge to get too mopey and maudlin. Plus, their banter is fun and snappy, in the vein of Coupe’s Happy Endings. If you’re still holding out hope for a Happy Endings revival one day — like I am — this might be the next best thing while we wait. 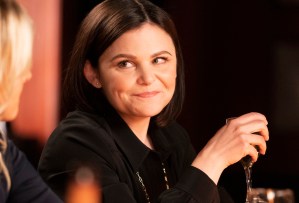 The three leads have excellent chemistry right off the bat, too: They feel like old friends, and we can sense their years of shared memories as they affectionately roast each other. Coupe is fully back in Jane-from-Happy Endings mode here, and it’s a glorious thing to behold. She’s backed up by two TV drama veterans who show they have a flair for comedy: Goodwin, from Once Upon a Time and Big Love, turns Jodie from a potentially whiny character into maybe the most relatable of the bunch, and Maggie Q, from Designated Survivor and Nikita, brings a solid deadpan appeal to Sarah as she applies her hard-charging, Type A personality to the art of grocery bagging. Tommy Dewey is solid, too, as Amy’s somewhat supportive hubby Henry.

Like the ladies’ short-lived life changes, I’m sure that Pivoting will quickly shake off its initial premise in the weeks to come and just be about three friends hanging out — and that’s just fine with me. After all, isn’t that the key to a good TV comedy? Just a bunch of people we want to hang out with each week, no matter what the premise is? Pivoting has that already, which puts it way ahead of the game, and I’ll happily stick around to see where these ladies’ new lease on life takes them.