Whistling at a white woman in Mississippi. This is the crime 14-year-old Emmett Till supposedly committed when a group of white men snatched him out of his uncle’s home in Money, Mississippi in the middle of the night and tortured and murdered him.

ABC’s new limited series Women of the Movement attempted to recreate the horrific event in Thursday’s premiere and opened with Emmett’s breach birth. Doctors told his mother Mamie (Quantico’s Adrienne Warren) that little Emmett would suffer mentally because an umbilical cord was wrapped around his neck when he was born.

But Mamie never gave up on her son, and when the show fast-forwarded 14 years into the future, Emmett (Space Jam‘s Cedric Joe) was shown as a kindhearted and well-adjusted Chicago boy who loved to cook and sing and suffered from little more than a slight stutter. While enjoying dinner with his family, Emmett’s Uncle Mose (Glynn Turman) insisted that boys weren’t meant to cook dinner but hunt, fish and farm and asked that his nephew return with him to Mississippi to do just that.

At first, Mamie said she didn’t want her only son to go down south because racism could cost a Black boy his life. But after a lot of begging and reasoning from Emmett and her family, the single mother changed her mind with the caveat that Mose look out for him. 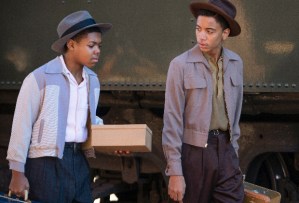 Mose said he would, but he was just one man. And when Emmett and his cousins snuck into town to buy snacks, Emmett tried to impress some boys in town by flirting with the shopkeeper’s wife and paid gravely for the innocent childhood misstep.

Thankfully, Women of the Movement didn’t show what the men did to Emmett, whose mutilated and bloated body was found days later in the Tallahatchie River. However, the palpable tension, fear and loss could still be felt as the racist mob grabbed a harmless child and turned him both into a symbol of bigotry and hate and a catalyst for the Civil Rights movement to change the country for the better.

What did you think of Women of the Movement, and will you keep watching? Grade the series premiere in our poll, and drop your thoughts in the comments.