After all of that was straightened out, Andi awoke to find an enamored Robin staring at her lovingly after a wild night of passion. Unfortunately for Andi, she didn’t remember much about the night because she drank just a little too much. But Robin was all to happy to fill her in.

He had such a good time, in fact, that he tried to convince Andi to call in sick and run away with him back to London. Andi said she couldn’t do that but added that she did want to see him again, and Robin said he was going to hold her to that promise. Later, when Andi got to work, there were vases full of roses all over her desk.

She asked Fatima, who had been arranging all the bouquets, if the flowers were from Gary, and sadly, they were. Andi was hoping they were from Robin and assured Fatima that she had finally dumped her control freak of an ex-fiancé, and Fatima congratulated her. 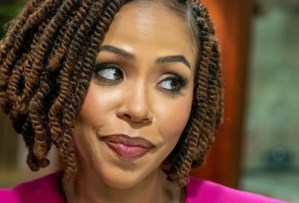 The two then talked about the night before and Karen’s antics, but surprisingly, Fatima didn’t mention Karen’s pregnancy. That was classy of her because you know if the shoe were on the other foot… Instead, Andi told Fatima about Karen telling her to invite Fatima to the strip club, to start some mess, of course, and Fatima laughingly said she was glad Andi didn’t listen to Karen.

Andi also noticed the blood on the cuff of Fatima’s pretty white dress, but Fatima lied and said it was food. Once she deflected that question, Fatima started poking her nose in Andi and Robin’s secret rendezvous and asked Andi what else she had done last night.

A blushing Andi said she went out with Robin but would have to tell her the dirty details later because they had work to do. Gary popped up and popped off later that day, but Fatima sent him away by threatening to frame him for throwing her down the stairs. Fatima really is the best.

But things got complicated for Fatima minutes later when the receptionist informed her and Andi that Hayden had been found dead in the parking garage. Yikes. Looks like Fatima and Zac, aka “Zatima,” will need to hire Andi as their lawyer after all. 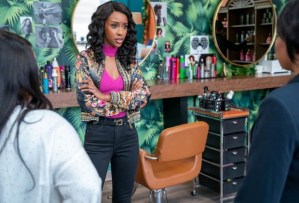 Karen was about to call Zac and warn him, but Pam said she couldn’t in case the authorities were tracing her phone. Pam then wondered if the woman in the suit was snooping around because of Zac’s newfound riches, and Karen said it probably did have something to do with that and decided to drive over to his new house.

Pam said Karen should be careful because the police might follow her, but Zac’s ex-girlfriend said she knew how to shake tailgaters. Turns out Karen was good at eluding the police because she showed up at Zac’s unfettered and warned him that an officer of some kind had come to her salon and was asking about him and if they still lived together.

Zac is a great actor, and when Karen asked what she should do if the woman showed up again, he said she should give her his number. A shocked Karen, who still hasn’t gone to the doctor about her pregnancy or confirmed the paternity, tried to play the baby daddy card, but Zac wasn’t trying to hear that, either. This hurt Karen’s feelings, as well as Zac’s initial refusal to show her the inside of his new house, and she stomped off in a huff.

Elsewhere in Atlanta, Danni and Preston had a loud and angry argument about El Fuego and broke up. And then El Fuego hollered at her at the airport and asked her out, but Danni rejected him because of his stripper job. A random customer tried hitting on Danni, but she turned him away, too, because he’s probably a sex trafficker. Wow! 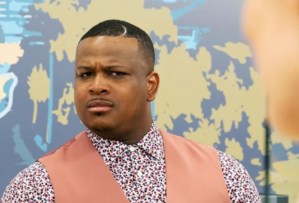 Over at the bank, Que called Maurice from jail and said he could cut a deal and get out sooner. He asked Maurice if he could stay with him, and Maurice said no and promptly hung up. Sabrina called Calvin so he could talk to Maurice about his daddy issues, and the two made date plans for that night.

Maurice counted a stack of ones as Calvin offered to set him up with one of his friends and Maurice eventually gave in — but not before insulting Calvin and Sabrina’s clothes. No matter what kind of pain he’s in, Maurice is gonna Maurice.

What did you think of the Season 4 premiere? Grade the opener in our poll, and drop your thoughts in the comments.