Netflix’s limited series Stay Close kept us on the edge of our seats throughout its run, so it only makes sense that the finale would include a twist… or two.

The first order of business in Episode 8 was figuring out who was the killer. It seemed like the culprit was Ray, but when Megan agreed to meet him at the pier, she got waylaid by a call from her future mother-in-law Frances and rushed to the nursing home to see her. Turns our Barbie had paid the elderly woman a visit, but because of her dementia, she couldn’t describe the woman to Megan very well.

Sadly for Megan, her identity became all too clear when she stabbed and bit Megan and attempted to murder her in the parking lot of the nursing home. But Megan used to live that street life, fam, and thanks to several effective kicks and punches, she got the knife away from Barbie and killed her with it instead.

The paramedics rushed Megan to the hospital, and Ray, who was none the wiser, waited at the pier where the police cornered and arrested him. Ever the negotiator, Ray told Det. Michael Broome that he would tell him everything he wanted to know if he could talk to Megan first. Broome explained that this would be a hard request to honor because Megan was in the hospital being treated for stab wounds. But Ray stood his ground, and Broome made the meeting a reality. 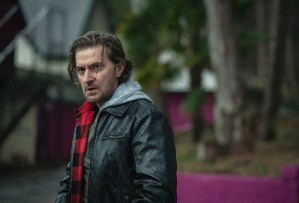 When Ray talked to Megan, aka Cassie, he explained that he got rid of Stewart’s body because he thought his former crush Cassie had killed the abusive brute in self-defense. This was news to Megan, who said she got a note from Ray saying to meet her in the woods just outside of Viper, and when she got there, Stewart was already bloody and dead, so she fled. Whoa. So if Megan didn’t kill Stewart, and Ray didn’t do the deed, then whom?

The answer soon arrived as Ken stalked Lorraine when her shift at Viper ended. Broome saw that Barbie was dead after trying to kill Megan, and he realized Ken was still on the lam and immediately called the strip club to warn Lorraine. The bouncer told Broome he had seen Ken but that he and Lorraine were no longer there.

This, of course, freaked out Broome, who tried to call Lorraine’s cell and warn her, but she didn’t pick up, so he rushed to her place and saw blood all over the floor as soon as he opened the door. Broome followed the trail of blood and discovered the dead body of… Ken. Oh snap. That’s when Lorraine walked up holding a knife with blood all over her clothes and hands. 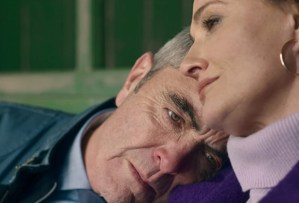 Lorraine told Broome to call off his backup officers, and it seemed like he had, but he didn’t. He then asked Lorraine why she had slaughtered Ken, and she said that he tried to kill her first, but she was better with stabby stabs. She also confessed to killing all those dudes whom Broome and the police had found the remains of, and when Broome asked Lorraine why, she said it was revenge.

She then told the story of her abusive husband beating her so badly that he killed their unborn child in her womb. Lorraine killed him in retaliation and then made it her life’s purpose to massacre all the men like her deceased spouse who thought it was cool to use women as punching bags.

It seemed like Lorraine was going to kill herself or Broome after coming clean, but he told her he loved her and would do everything he could to keep her safe. Lorraine and Broome hugged, and she gave him her knife, and the police came and arrested her. Lorraine went on to confess to killing 19 men in total, including Carlton.

However, in Stay Close‘s final and twistiest twist of all, Dave told Megan that he’d pushed Carlton’s car into a nearby lake to cover for Kayleigh’s possible connection to his disappearance. Unbeknownst to Dave, Carlton was still alive in the trunk, and he had accidentally killed him while trying to protect his daughter. Damn. Should Megan tell him the truth or nah? What’s another secret, right?

What did you think of the Stay Close series finale and that final twist? Grade the installment in our poll, and drop your thoughts in the comments.