When it comes to Good Sam, which premieres tonight at 10/9c on CBS, Sophia Bush is fulfilling a childhood dream. The actress grew up wanting to be a surgeon and sees the irony of finally playing one in the upcoming medical drama.

“It’s the longest manifestation game that I’ve ever played in my life,” she tells TVLine.

The story centers on Dr. Sam Griffith (played by Bush), a genius heart surgeon who becomes chief of surgery when her boss and father, the renowned Dr. Rob “Griff” Griffith (Jason Isaacs), falls into a coma. He wakes up months later expecting to resume his duties, jump-starting a generational conflict between father and daughter about how to lead the OR.

“The central conflict in our show between Sam and her father and this generational gap, this gap on gender perspectives, really is something that so many of us are experiencing in the world right now,” Bush explains. “We’re looking at this old way, this very patriarchal, gruff way of doing business and saying, ‘But what if we lead with empathy? What if we listened to each other? What if we didn’t see people as supply for our demand or our enemies and rather, we saw them as human beings who we might be able to show up for, and be in community with?’” 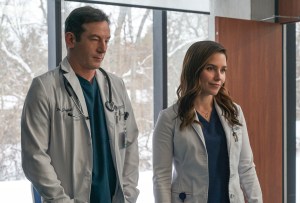 Griff’s abrasive personality is a stark contrast to Sam, who leads with compassion while still excelling at her job. Bush finds common ground with Sam and her character’s ability to set high standards while remaining respectful to those around her.

“Sam is a person who really balances a pursuit of excellence with readily available emotions for others. I think in playing her, she reminds me that I have the capability to do that as well,” Bush shares. “We’ve all experienced environments where our emotions might be treated not as a superpower, and personally, [they] are. It’s a wonderful experience to play this character and lean into her strengths and be reminded that I’m allowed to lean into my own as well.”

Bush takes that notion to heart, serving as both an actor and an executive producer on the CBS drama. The actress, who’s been outspoken in the past about her experiences on the set of both Chicago P.D. and One Tree Hill, says she is “incredibly proud to set the kind of tone on a set that does lead with empathy” and that “leads with deep respect for every single person on it.”

Whether it’s a leading actor, background actor or behind-the-scenes crew, she notes that “every single person on our set knows that they’re valued, loved and appreciated and knows that we do not take the effort that they make to create a show with us for granted ever.”

“We want to build a set that is a joy to come to and that is filled with laughter and that meets one of the highest standards of professionalism that I have ever seen anywhere. That’s the goal every day, and that’s the work that I’m really proud to do as a leader,” she explains.

Bush doesn’t take her Good Sam experience for granted and finds joy in an environment that fosters spontaneous creativity while also getting through 10 pages of script in a day. “This is my favorite television show that I’ve ever worked on in my life, and I hope that people love it as much as we do,” she adds.