Wednesday’s series premiere established Griff as the arrogant and abrasive chief of surgery who relished in creating a cutthroat environment.

As the second-in-command, Sam represented the exact opposite: friendly and compassionate, but still brilliant at her job. Given Griff’s lack of respect and constant undermining, Sam considered taking a job at the Cleveland Clinic. Before she could make that choice, though, an armed assailant who had no connection to Griff shot him in a random act of violence.

SAM’S ASCENSION | With Griff in a coma for six months, Sam stepped up as interim chief in his absence. She’s an amicable leader who works through stress by playing the piano. The hospital board voted to make her promotion permanent, and Sam prepared to deliver her acceptance speech during a dinner reception with major donors that night. In the elevator, she unknowingly insulted Malcolm Kingsley, the hunky and “boring rich donor” also on his way to the party. But before she could reach the festivities, her mother intercepted her with important news. 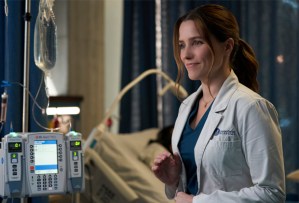 GRIFF’S BREAKTHROUGH | Leave it to Griff to wake up right when his daughter is about to formally accept her promotion. He didn’t even congratulate her and was more concerned with resuming his duties. Being out for half a year meant having to prove he could still do the job via a proctorship, which Sam agreed to supervise. However, that didn’t stop Griff from questioning her authority. He disagreed with a new patient’s diagnosis, ordered lab tests without Sam’s authorization and undermined her at every turn. When Vargas, the patient in question, suffered complications from a sore, he dismissed the team’s brainstorming of genetic diseases, confident that it was related to an STD after Vargas admitted he cheated on his wife.

When Vargas coded, the doctors realized they must have missed something. Griff called a vote for a diagnostic test, and everyone sided with him over Sam, who believed the procedure to be risky and invasive. Even her best friend Lex (Skye P. Marshall) begun doubting her. After thinking it over, Sam realized Vargas might be suffering from Chagas disease after being bit by an insect. Still, Griff thought it was too late to save Vargas. “The heart is gone, and you have to be able to call it,” he told Sam.

A BETRAYAL | While visiting Lex, Sam learned that her best friend has been sleeping with Griff before he went into a coma. Upset over the betrayal, she decided to stop proctoring her father. This put Griff in an unfamiliar position — dependent on his daughter. He needed her help to return to the thing his loved, which is surgery, which meant making things right. As his ex-wife Vivian (Wendy Crewson) pointed out, things haven’t been the same between him and Sam since the car accident  — he was speeding and crashed — which resulted in Sam having heart surgery.

FORGING AHEAD | Sam decided on a heart transplant for Vargas and realized the donor heart was too small. She needed to perform a risky procedure that combined both the new heart and Vargas’. This also meant calling her dad to talk her through it since she’d never done it before. Griff offered his guidance, and for once, they were on the same page. The procedure was successful, and Sam delivered the good news to Vargas’ wife.

Taking Vivian’s advice, Griff attempted his version of a heart-to-heart with Sam, which did not go over well. It didn’t come off as sincere, and she called him out for never being there for her. Luckily for him, Sam agreed to continue proctoring Griff as a doctor. But as his daughter, she’d called it quits.

How did you feel about Good Sam’s premiere? Grade the premiere below, and let us know your thoughts in the comments.