Chicago P.D.‘s Burgess and Ruzek have hit a nice groove raising Makayla together, which meant it was the perfect time to shake things up.

The trouble began right off the bat in Wednesday’s episode with Ruzek unable to pick up Makayla from school because Burgess forgot to have him authorized. Although Burgess later arrived to clear things up, Ruzek was clearly annoyed with all the commotion.

THE CASE | Ruzek put his focus on this week’s case, which involved a girl around Makayla’s age who’d been kidnapped. Their main suspect was a registered sex offender named Charlie, whose house contained paintings of various children, including one of the missing girl. Ruzek interrogated the man, who insisted he had nothing to do with Brianna’s abduction. Ruzek continued to press Charlie for a location, but Charlie wouldn’t break.

TENSE “BURZEK” MOMENT | Still plagued by the earlier incident at Makayla’s school, Ruzek casually asked Burgess why he wasn’t added to the paperwork, and she tried to dismiss him. But after he persisted, she revealed her reasoning. Burgess thought it would be better to establish more boundaries with Makayla, that it would be easier if there ever came a time when he wasn’t around. She was being realistic since they aren’t together and there’s potential for him to find someone else and start his own family.

But Ruzek pointed out that the same was true of her, that she could also walk away from him at any time. “And from where I’m sitting, I [have] no right to be in her life right now,” he told her. “I’m some backup plan that sleeps on your couch.”

FINDING BRIANNA | Ruzek returned to the interrogation room and showed Charlie the community posters outing him to his neighbors as a pedophile. Charlie was shaken by it, but maintained his innocence. Atwater called Ruzek away after new evidence showed a different man taking Brianna away in a white car — which Charlie previously mentioned in his list of potential other suspects. Ruzek went back to interview Charlie for more details, but Charlie refused to talk, given Ruzek’s harsh treatment. 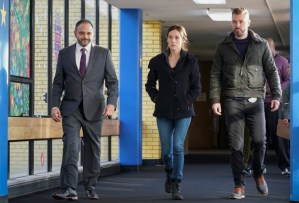 Charlie retuned home to find his house vandalized and graffitied by Brianna’s father, who was arrested. After some reluctance, Ruzek finally got the information he needed from Charlie and issued a warning if he ever hurt another child. Charlie’s tip helped Intelligence zero in on a man named Joseph who matched the description of Brianna’s abductor. Joseph was virtually catatonic during his interview with Halstead and gave no details. The team put it together that he lost his daughter and tried to replace her but panicked when Brianna resisted. Intelligence then tracked Brianna to a warehouse. She was injured when Joseph grabbed her — she hit her head against the wall — but was expected to recover after making it out of surgery at Chicago Med.

THE AFTERMATH | Burgess revisited her previous conversation with Ruzek, telling him she knows that he loves Makayla and that Makayla loves him, but she’s trying to protect her daughter. Ruzek assured Burgess that he wasn’t going anywhere. Makayla might not be his, per se, but she still feels like his kid. And while things between him and Burgess are complicated, he still has a right to be in her life. Burgess agreed, which mean it’s time for an official change.

While tucking Makayla in, Ruzek asked for her permission to live with them permanently, which Makayla granted. Burgess and Ruzek planned to move into a three-bedroom apartment so he can have his own room rather than sleep on the couch.

However, the happy revelation was interrupted when Makayla mentioned a man who talked to her by the fence at her school. Alarmed, Burgess and Ruzek rushed to Makaya’s school the next day to check the school footage. The man in the video was Makayla’s paternal uncle, who filed a petition for full custody. It looks like they’re in for an uphill battle over Makayla.

Got thoughts on tonight’s episode? Drop them in a comment below.