Thony De La Rosa, the woman at the center of Fox’s The Cleaning Lady, is excellent with a sponge and rag — but she appears to be creating a mess of her own that all the paper towels in Las Vegas won’t wipe away.

During Monday’s series premiere of the freshman drama, which is adapted from the 2017 Argentinian series La chica que limpia, we’re introduced to Thony (Daredevil‘s Elodie Yung) and her sister-in-law Fiona (As the World Turns‘ Martha Millan), both undocumented immigrants who work on the clean-up staffs for various nightlife events in Vegas. The women also live together, and have for months: Thony’s 5-year-old son, Luca, has a rare immunodeficiency and is still seeking treatment after his initial bone marrow donor backed out months ago, leading Thony to remain in the States illegally as she tries to find helpful medical care for the boy. (Thony was also a doctor back in the Philippines, and her skills still prove useful when, say, Fiona punches her skeezy Las Vegas boss in the throat, and Thony has to quickly use a knife and straw to get the guy breathing again.)

Early on in Episode 1, Thony is working another night shift, cleaning the bathrooms in a dimly lit building where an underground fight is taking place between two women. Some intimidating and important-looking men, who we’ll later learn are members of a crime syndicate, attend the fight, but when the brawl ends with a different woman winning than the men had anticipated, one of the men later shoots the fight organizer in the chest, killing him instantly. Thony sees the murder go down from around a nearby corner, but she tries to stay hidden… until her cell phone rings, and the men find her. 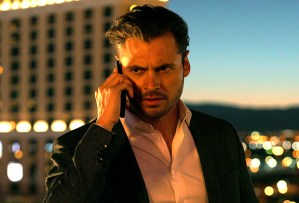 Thony rattles off some quick and impressive knowledge about how to best clean up the body and its bloodstains, and the men — namely the apparent boss, Arman (Designated Survivor‘s Adan Canto) — opt to spare her life and allow her to clean up the crime scene. She does so quite efficiently and carefully, mentioning to Arman that she takes pride in her work because she has a family that needs her. Without any further fanfare, the men take her home. (And though we’ll later find out that Arman has a wife of his own, it’s safe to say he’s very into Thony. You could power the Vegas Strip with all that electricity.)

But, as any of us who’ve watched a single crime drama before already know, Thony won’t be able to detach herself from this syndicate anytime soon. While visiting a stem cell clinic with her son the next day — a visit that’s essentially over as soon as it begins, because Thony’s expired visa makes Luca ineligible for the clinic’s gene therapy trial — she notices one of Arman’s right-hand men sitting in the waiting area, watching her and her son. She requests a meeting with Arman, where she informs him that she refuses to be followed by his cronies, especially while her son’s in tow; Arman counters by offering her a job as his on-call cleaner. She’ll get money for cleaning up after the fight the previous evening, a burner phone where Arman will contact her for future work, and access to a doctor who could help Luca.

Thony insists she can’t be bought, but Arman tells her they’re both in a country that isn’t their own, and they need to survive any way they can. “I like you,” he says, when Thony asks why he wants her to work for him. “And I don’t want to have to kill you.” Aaaand, she’s hired! And not long after Thony agrees to work for Arman, she gets a call from the same stem cell clinic that previously turned her away, with an unexpected offer to schedule an appointment for Luca. It seems that Dr. Saroyan, the on-call doc who works for Arman’s crime ring, put in a referral for Thony, and her undocumented status is suddenly no longer an issue. 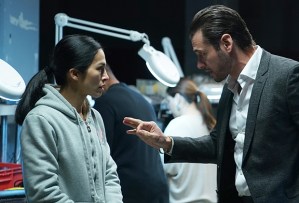 Thony’s first cleaning job for Arman is simple enough: He hosts a debauchery-filled orgy-but-we’ll-call-it-a-party the following night, and he needs his pad spotless by dawn. It’s a long night for Thony, but the place is indeed sparkling by the time the sun rises. The next job, though, is considerably more dangerous. It seems the cops have ID’d the body of the fight organizer that Arman’s associate killed earlier in the episode, and the authorities are closing in on the syndicate’s underground headquarters. It falls to Thony to wipe the place clean so nothing will be traced back to Arman and his men — but when Arman informs his boss that HQ is being cleaned as they speak, his boss shrugs that he plans to blow the entire place up instead. “I’ve still got a cleaner inside,” Arman tells the man, who responds, “You mean the cleaner who should already be dead?”

Arman then races back to HQ to get Thony out of the building before it blows; for her part, a stunned Thony has already found the bomb and is trying to make her own escape just as Arman races back inside to retrieve her. The two just manage to get outside seconds before the building erupts, but shrapnel from the explosion wounds Arman, and Thony has no choice but to flex her medical skills right there on the pavement, quickly cauterizing the wound before she and Arman climb into a waiting car and evade the cops who arrive moments later. In the car, Arman tells Thony that he came back for her as soon as he learned a bomb had been planted, but Thony asserts that’s not good enough. If she’s going to continue working for Arman, she needs respect and, more importantly, protection — especially protection for Luca, if anything should happen to Thony on the job. “I give you my word,” Arman tells her, and they sip liquor and smile at each other in the backseat. (That heat, folks! It’s not just from the explosion!)

The next morning, while Thony and her family are playing a game of basketball with Luca, Thony gets another call on the burner phone. We don’t hear what the job is, but a few minutes later, Thony is waiting outside her house, caddy of cleaning supplies in hand. A black SUV pulls up, and Thony gets inside. But as the SUV drives off, we learn that two FBI agents have also been parked outside Thony’s place. “That’s her,” says one of the agents, played by Splitting Up Together‘s Oliver Hudson — and he snaps a photo of the SUV as it speeds away.

OK, your turn! What did you think of The Cleaning Lady‘s debut? Grade it in our poll below, then drop a comment to elaborate!