The All Valley Karate Tournament was very much a “Moment of Truth” for the kids of Cobra Kai, so what better time to revisit The Karate Kid‘s classic track with a little help from a country superstar?

In Episode 9 of Season 4, Carrie Underwood makes a surprise appearance at the tourney to perform Survivor’s 1984 hit “The Moment of Truth,” just in time to give the kids a bit of encouragement before their fights.

Just as some of the characters on screen were shocked by the singer’s presence, so too were many of the background actors on set.

“We had all these extras there, hundreds of people,” executive producer and co-showrunner Jon Hurwitz tells TVLine. “Nobody knew that Carrie Underwood was about to perform in front of this audience, so the reaction that you see on screen is the reaction. It was natural, which was, “Holy s–t, what the hell is going on here?”

So how did it all come to fruition? When Cobra Kai made its way to Netflix at the start of its third season, Underwood tweeted about how much she and her family loved the show, and her words remained in the back of producers’ minds. 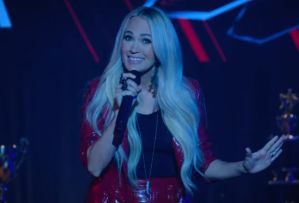 “No one would ever expect somebody at the level of Carrie Underwood to be there, but we reached out and wrote a letter,” Hurwitz continues. “We’re all fans of her work and appreciated her love of the show, so we asked if she would mind popping down from Nashville and heading over to Atlanta to spend a day on set and perform this remake of one of the songs from the original Karate Kid soundtrack. She was game immediately. She appreciated it and was excited. This was a fun thing for her family for her to appear on the show, and to step in front of this All Valley crowd who had no idea that she was going to be appearing. It was amazing.”

Pulling off a major celebrity cameo and keeping it a secret would’ve been difficult enough during a normal production, but Season 4 was filmed during the height of the pandemic, which added the typical hurdles TV productions are faced with during these trying times.

“It was like a holiday for all of us working on the show,” Hurtiwz adds. “We all had masks and shields on, and it was a very tough, challenging production in a lot of ways. Having Carrie Underwood serenade this crowd at the end was such a wonderful celebration of an amazing season.”

What did you think of Underwood’s “Moment of Truth” rendition? Vote in our polls below, then drop some comments!