Several characters’ fates are left hanging in the balance by the end of Monday’s 9-1-1: Lone Star premiere. And while we hate to leave them hanging any longer (sorry, y’all!), there’s something we absolutely need to discuss first.

The only thing more devastating than the ice storm that hit Texas this week was the apparent demise of “Tarlos,” a couple so hot they once failed to realize their house was on fire while they were having sex. So, what could have possibly led to T.K. and Carlos calling it quits? That’s the question on everyone’s mind. And while Nancy did her best to solve the mystery, well… her last name definitely isn’t Drew. 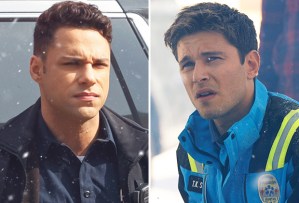 At least Nancy got one thing right, though: Everyone loves T.K. and Carlos together. Heck, we even savored every second of their awkward encounter at a pop-up triage unit towards the end of the episode. From the moment Carlos notices that T.K. is among the first responders on the scene, he gets all stuttery and loses the ability to think straight. It would be even more adorable if so many lives weren’t on the line.

Sure, the uniformed power couple has had some issues in the past, but nothing about the way T.K. and Carlos left things at the end of Season 2 signaled an impending breakup. Whatever happened between them, they clearly had one eventful hiatus.

Then again, T.K. and Carlos’ relationship isn’t the only thing in shambles as we enter Lone Star‘s third season. The 126 remains disbanded, with only Marjan and her social media devotees standing between the firehouse and a literal wrecking ball. Meanwhile, the team’s former leader remains absolutely no help whatsoever, refusing to do even the bare minimum to get himself reinstated. All Owen needs to do is apologize to Billy, but when the committee asks him he struck a superior officer without provocation, Owen offers this smarmy response: “I deny it was without provocation… and I’m not so sure I would use the word superior.” 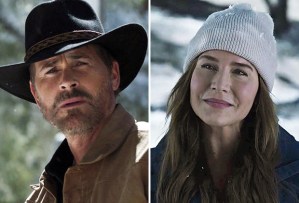 In a nutshell, Owen has effectively decided to leave the 9-1-1 part behind and fully embrace the Lone Star of it all. He now resides in a quaint woodsy cabin, where he divides his time between talking to Buttercup, chopping firewood and flirting with a recent divorcée named Sadie (played by Julie Benz). Honestly, Owen has a pretty sweet new life, one I’d fully support… if it didn’t mean completely shirking his responsibilities to the 126. As he later explains to Marjan, who storms his cabin to give him a piece of her mind, he’s tired of trying to be the hero. “I haven’t given up, I’ve given in to reality,” Owen says. “We can’t save the world because the world doesn’t want to be saved.”

That’s all well and good, but something tells us that Owen is going to be forced back into action next week when the ice storm hits close to home. We already see Marjan swerve off the road and into the trees to avoid hitting a truck full of turtles, so there’s one crisis right there. Not to mention the turtles. My God, won’t someone please think of the turtles!”

Not to be outdone by a bunch of little turtles — teenage, mutant or otherwise — Paul also finds himself in a tough spot at the end of the hour. His new team responds to a collapsed church, which has since become an “ice palace” (I don’t blame Judd one bit for making that Elsa reference), and poor Mr. Strickland is hit by a large piece of the structure during a daring rescue attempt.

OK, let’s talk: What did you think of the Ice Storm (dot dot dot) Part 1? Why do you suspect T.K. and Carlos split, and how long do you predict it’ll take them to get back together? And how is Lone Star going to do Paul dirty like that? Grade the episode in our poll below, then drop a comment with your full review.