Warning: The following contains spoilers for the Season 4 finale of Cobra Kai.

The All Valley Karate Tournament has crowned its new champions.

In the Season 4 finale of Cobra Kai, two victors emerged from the feuding dojos’ chaos, as Hawk took home the trophy for the boys, and Tory fought her way to becoming the tournament’s first ever female champion. But Tory’s win also cinched a big W for Cobra Kai, as the “baddest dojo in the valley” defeated scrappy underdogs Eagle Fang and Miyagi-Do overall.

But those weren’t the only moving parts in the action-packed season closer. Not only did Terry Silver announce plans to expand the nefarious dojo throughout the valley, but Miguel made a life-changing decision to quit the tournament and track down his father in Mexico, while Johnny and Daniel finally agreed to bury the hatchet (for real this time!) and help the kids find their own paths through karate and life.

Below, executive producers and co-showrunners Josh Heald and Jon Hurwitz talk to TVLine about all things Season 4, including the finale’s major tournament happenings, Miguel’s abrupt trip abroad, and what the future may hold for Tory and Robby.

TVLINE | Miguel walks away from the tournament just before his final fight. Why does he make that decision and what’s going on in his head?
JOSH HEALD | We’ve seen Miguel rise to the highest heights, and have even seen him win an All Valley Tournament. We wanted to position the Miguel/Johnny storyline in Season 4 in a more personal way, in terms of how Miguel is approaching this tournament, how he’s reconciling who he is, and how he’s figuring out his relationship with Johnny, as that’s evolving. Johnny is a sensei and a father figure, and we wanted to really lean into that. Besides Sam and Daniel’s father-daughter dynamic, these are really the only other characters we can do this type of storyline with.

It was important to us with so much karate rivalry to make sure that we’re experiencing some of that real teenage coming-of-age relationship stuff, as well. Miguel is getting evermore conflicted in terms of who his mentor is, who his role models are and who has his best interest at heart. Is he getting sucked into something that’s not a rivalry of his own making or that’s not a battle that he has personal space in at every given moment? We wanted to put Miguel and Johnny in a position of them not being on the right page with each other at the right time. They both have internalized motivations as to where they want to be at this point in their lives and what’s really itching at them. In a way, Miguel’s decision is a split-second one, and in a way, it’s something that’s been brewing the whole season. By the time they realize they’re on different pages, it’s too late. 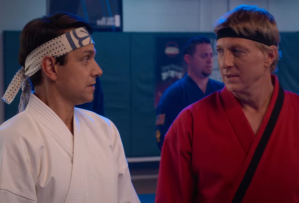 TVLINE | In the finale, Johnny and Daniel learn the error of their ways, but before the tournament, Johnny gets very jealous of Daniel and Miguel’s relationship. Why does that trigger his insecurities?
JON HURWITZ | Ever since that All Valley Tournament in high school where Daniel had the victory over Johnny, he’s felt a little less than. He’s felt like second best or below that, and then 30-some-odd years of life continued to prove that out as he found himself struggling with having odd jobs, a dysfunctional relationship with his son and no love in his life. Meanwhile, looking at billboards and hearing commercials with his old high school rival who’s a massive success, he can’t help but feel jealous or less than Daniel in certain ways. Even though the two of them have buried the hatchet, in a sense, and they’re working together, it’s only natural. When Daniel starts making a connection with Miguel — who is one of the most important relationships in Johnny’s life and is a surrogate son, of sorts — Johnny starts feeling like this lifetime rival of his is potentially a new, better role model that Miguel is turning to instead of him.

TVLINE | Most of the kids want to expand their training and learn from both Johnny and Daniel. Why was that so difficult for the senseis to understand?
HURWITZ | Johnny and Daniel were brought up in these ideologies in their youth that are ingrained within them. But as we all get older, you can either dig in and be rigid with your beliefs about the world, or you can expand your mind and continue your education, and take what you feel is valuable in all sorts of philosophies and apply them to your own life. That’s something that all of our characters are all wrestling with, and this season, we see our youthful characters having that open mind. That’s not uncommon in life where you’re a teenager and you’re more open to the ideas of the world than somebody who is set in their ways. If you look back at the messages of Mr. Miyagi to Daniel (which we flash back to), Daniel, as a kid, says, “I’ll follow your way,” and Mr. Miyagi says, “No, you find your own way.” So Mr. Miyagi was evolved enough to be aware that it’s everybody’s quest in life to find who they are and what they believe in. Johnny and Daniel are wrestling with their own firm beliefs this season, but their kids may be a little bit ahead of them throughout this year. 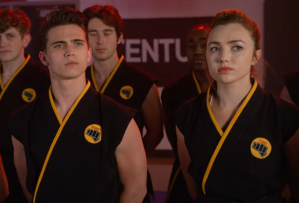 TVLINE | Robby and Tory are both left at very interesting crossroads at the end of the finale. What can we expect from their stories heading into Season 5?
HURWITZ | Season 4 was a very significant season for both Robby and Tory in different ways, but also we see them come together in a relationship. Robby is sort of ready to open his arms to Johnny after all these years, which is something I think a lot of fans have been wanting to see, and something we’ve all been rooting for, for a long time. So we’ll see how Robby and Johnny’s relationship continues. Will they fall back into their old ways or is there continued progress with them, especially with the wrinkle of Johnny’s tight relationship with Miguel and his relationship with Carmen and all that? We’re further exploring Robby and his allegiances, and Season 5 is another substantial season for him.

As for Tory, she’s a champion. It’s something she’s wanted, and she doesn’t have all the advantages of a lot of the other teens on our show. She has a sick mother and comes from very little, so to be a champion is something that was going to be meaningful, and hers and hers alone. But to find out at the end of the season that the legitimacy of that championship is in doubt in her mind gives us an interesting place for her to move on from. How is she going to respond to that? She felt like she had something special and pure, and she can go in any number of directions off of that kind of bombshell. 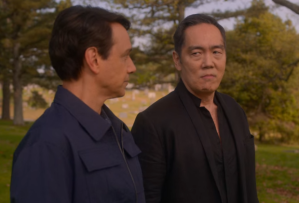 TVLINE | Anthony finds the scroll that Chozen gave to Daniel last season. Is there anything you can tease about that, and will it come into play down the road?
HEALD | There’s always a chance you’re going to find out more about that scroll or more about the history of Miyagi-Do, but there’s nothing we can tease at this time. We will say that it was tied directly into Daniel seeing the original scroll for the crane technique, which introduced the idea that these scrolls do exist. That second scroll that Chozen gave Daniel when he was in Okinawa, I think some of the assumption was, “Oh, maybe he was giving him that crane technique scroll,” but no, there is this new scroll, a new technique. It was there to introduce to the world that there are other scrolls. There is a history there.

TVLINE | You recently wrapped production on the next season. Is there anything else you can tease for Season 5?
HEALD | We obviously know that Chozen’s coming back into the fold, and Daniel, who we find at the ultimate depth of his loss, is feeling defeated and feeling like he made a deal with the devil. He’s realizing that to allow Miyagi-Do to be extinguished this way doesn’t sit well. There are times where the fight has to change, and what better moment than for Chozen to come back into this story and to lean into that part of Miyagi-Do. Chozen is somebody who ties into the more aggressive past where fighting wasn’t about a contest, it was about life and death. He still feels like he owes Daniel some help, and he wants to make amends even though Daniel has forgiven him. From that alone, I feel like audiences can infer the energy with which Season 5 is going to begin. There are quite a bit of storylines that start spinning very fast and very aggressively as we enter next season.