Disney+ cracked open The Book of Boba Fett this Wednesday, with the premiere of the first Mandalorian offshoot. Will you keep reading?

The live-action Star Wars series’ first episode, titled “Stranger in a Strange Land,” opened in the “present,” with Boba (played by Temuera Morrison) doing his daily immersion in a healing tank inside what was once Jabba’s palace. But as he will later share with Fennec Shand (Ming-Na Wen), “the dreams are back” — meaning, the memories of his past.

In this instance, Boba flashes back to, at first, his sire Jango’s decapitation by Mace Windu in Star Wars Episode II: Attack of the Clones. We then leap forward to the very onset of his thousand-year digestion by the Sarlacc pit into which he tumbled in Star Wars Episode VI: Return of the Jedi. We now see, though, that Boba was quick to appreciate his predicament and used a wrist gauntlet to flame-throw his way through the Sarlacc’s abdomen, and dig his way to freedom. Alas, no sooner had he collapsed after the arduous endeavor, a band of Jawas robbed him blind, Mandalorian armor and all. Jawas, man.

Boba was found, revived and dragged off by some Tusken Raiders, who tied him up at their camp beside a Rodian, with a Massiff serving as guard. That night, Boba catches the Massiff’s attention and lures it over, to choke it out using his bindings. He then slashes his bindings with one of the creature’s teeth, then asks the Rodian if he wants to escape with him. The Rodian instead alerts the sleeping raiders, who with a Massiff chase down their prisoner. Boba is then tested in a duel with one raider, before they recapture him and take him back to camp. 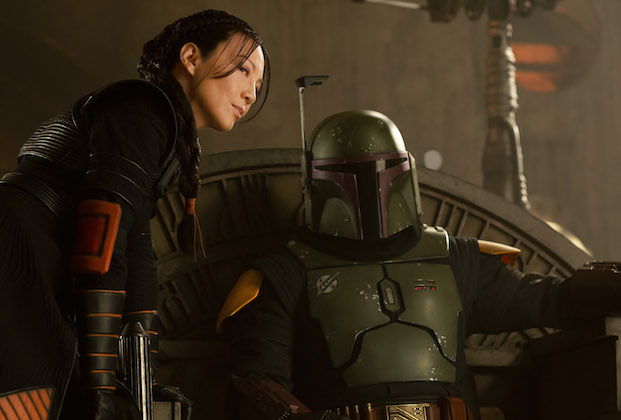 At this point, Fennec wakes Boba from his healing session, explaining that the assorted dons are on their way to pay their tributes to Bib Fortuna’s successor. Boba suits up (with the help of some dutiful droids) and then holds court as the droid UK2-B (voiced by What We Do in the Shadows‘ Matt Berry) announces each don, starting with an Aqualish and then a Trandoshan whom Boba used to work for. Awkward!

Next up is not the mayor of Mos Espa, as expected, but his majordomo, Mok Shaiz (played by Veep‘s David Pasquesi). He explains that the mayor is busy with other, pressing matters, and then states that there has been a “misunderstanding,” that he is there not to pay a tribute, but collect one from the crime boss. After consulting with Boba, Fennec says that Lord Fett’s gift to the mayor will be his leaving the majordomo unmolested. Mok Shaiz then says/warns that “another delegation” is sure to show up. 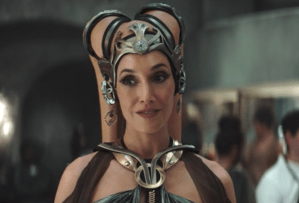 Boba heads into town with Fennec and two Gamorrean guards of Jabba and Bib’s that they decided to keep on, though Boba declines to be paraded around on a litter, as is custom for a crime boss. They stop by a cantina run by Madam Garsa Fwip (Flashdance‘s Jennifer Beals), and Boba introduces himself as Bib Fortuna’s successor and assures her that her business will continue to thrive under his watch. She appreciates his visit to the Sanctuary, at which point his and Fennecs helmets are returned cleaned, polished and, in at least one case, filled with credits.

But after emerging from the cantina, Boba and Fennec are jumped/surrounded by some gang of sorts, wielding energy shields. Boba and Fennec put up a very good fight, and then with an assist from their arriving Gamorreans are able to best the bunch. Two get away, though, and Fennec gives chases, across a series of Mos Espa rooftops. Getting the drop on the duo, she pitches one off the roof, then captures the other/drags him back to the palace. 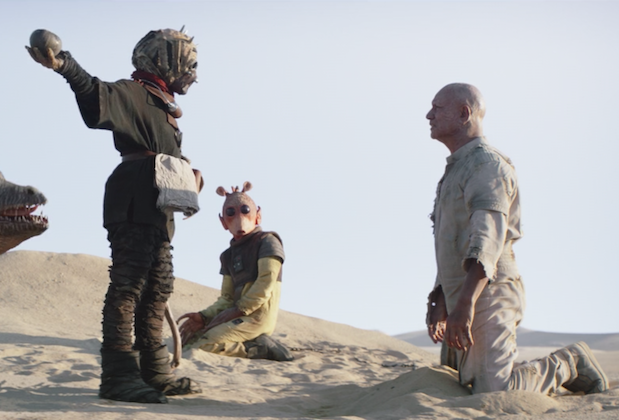 As Boba returns to the healing tank, we flash back again, to the Tusken Raider camp, where a kid leads Boba — chained to the Rodian — across some dunes, to show them a small home getting vandalized by a gang. (Anyone recognize their graffiti? I came up empty.) The kid then tasks Boba and the Rodian with digging in the sand, to look for softball-sized pods that contain precious water. As they do so, the Rodian uncovers what appears to be a giant claw — which belongs to, they soon realize, a towering, six-limbed creature (Irrukiine?) that rises from beneath the sand! The creature swats away the Massiff and targets the kid, but Boba climbs onto its back with his chain and chokes it out — much as Leia did with Jabba back in the day.

Boba and the kid later return triumphantly to the camp, where, I think, the lad claims to the others that he bested the beast — but the clan leader clearly knows better, and offers Boba some water in appreciation.

What did you think of this first, very introductory chapter in The Book of Boba Fett?