It remains to be seen whether Johnny Lawrence and Daniel LaRusso’s newfound partnership will be able to defeat the nefarious John Kreese. But with Cobra Kai‘s staple villain getting backup of his own, the road to victory is going to be rockier than ever.

In last year’s Season 3 finale, Kreese made a phone call to an ominous colleague from his past who we now know was none other than Terry Silver (Thomas Ian Griffith), a former pal from his military days who became one of the original co-founders of Cobra Kai. In the upcoming fourth season (all 10 episodes premiere on Netflix Friday, Dec. 31), Daniel’s former foe will step back into the dojo to create a whole new set of problems for the merged Miyagi-Do and Eagle Fang dojos.

When we last saw Silver in The Karate Kid Part III, he hatched a plan to help Kreese get revenge on LaRusso, tricking Daniel-san into training with him so he could set the teen up to lose against Mike Barnes in the All Valley Karate Tournament. The plan ultimately failed, and Daniel secured the win. But with Silver back in the fold after all of these years, Kreese’s hold on the Valley’s karate obsession will only grow stronger, as the battle to win the next tournament rages on.

“Terry’s a bombastic character who ties into the work of Cobra Kai and what that dojo represents,” executive producer and co-showrunner Josh Heald tells TVLine. “There are some really deep, interesting and complex scenes that happen in Season 4 between Kreese and Silver as we explore what Cobra Kai is now in this world where the All Valley Tournament is coming. The stakes have never been higher.”

At first, Terry isn’t too keen on re-adopting Kreese’s credo, but it doesn’t take long for his storied past with his former partner to weigh heavily on him, as he slowly changes his mind about re-joining the dojo.

“Nobody better understands what Cobra Kai’s capable of than Terry Silver,” Heald continues, “but these two men haven’t worked together in many years, and when they last worked together in Karate Kid III, it went so poorly. There are a lot of hurdles that need to be overcome, there’s a lot of history that needs to be rehashed, and there’s a lot of trust that needs to be re-established in order to get Cobra Kai on the same page. To expect that it’s going to be smooth sailing would be naïve.” 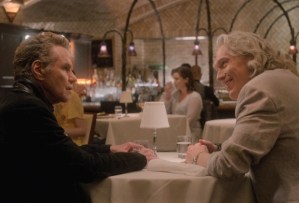 Griffith, who had since turned his attention to writing (with credits including Grimm and Dolly Parton’s Heartstrings), hadn’t acted since 2007’s TV-movie The Kidnapping. Regardless, he was “very excited to get involved” in this iteration of the Karate Kid franchise, says executive producer and co-showrunner Jon Hurwitz.

“The Karate Kid was such a memorable and important moment in his career. Part 3 was his first movie and he had a giant role in it, so it was a unique experience, and something he’s identified with for years,” he says. “He saw the kinds of things we did with characters in the past (like Johnny Lawrence and Sensei Kreese), and the way we’ve given them three dimensions and all sorts of depth. Our first discussions with him were no different, running through our plans for how to take the Terry Silver that we saw in Karate Kid III — a billionaire laughing maniacally as he terrorized a teenager and an old man — and make sense of that, explain the past, dig deeper into the character to understand him better, and then carry him forward.

“He had that acting itch there and he got on board, and you would never guess that this person had not acted in a while because he is the ultimate pro in every sense of the word,” Hurwitz adds. “We cannot wait for people to see what’s in store with Terry Silver and Thomas’ performance come December 31.”