The second Dexter realized he needed to tell Harrison everything, he was abducted and nearly killed before he could do so. Par for the course for Dexter: New Blood, I suppose.

It all came flooding back for Harrison last week, when the boy admitted to his dad that what he thought were a bunch of nightmares were actually real, horrific memories from his past. Even more heartbreaking was the fact that Harrison thought his own dark tendencies were to blame for his dad walking out on him, and not because, well, his dad was the Bay Harbor Butcher who murdered a bunch of people and dumped his aunt’s body into the ocean. So while Dex finally wants to purge his soul of the darkness that plagues them both, he’ll first have to survive Kurt’s latest murder attempt.

So how did Dexter get himself out of this one? Let’s recap “Unfair Game.”

Dexter lies passed out in the bed of Elrick’s truck, dreaming of Harrison viciously slaughtering bullies from school. Kurt phones Elrick to check in, and when the call ends, Dexter strangles the guy with the wires on his wrists. The truck veers off the road and crashes into a pole, ejecting Dexter entirely. Coincidentally, he uses the titanium screw Kurt sent him to fully free his hands, but when his abductor comes to, he chases Dex into the woods with a rifle.

At the station, Logan lets it slip to Angela that Jim “nearly killed that drug dealer,” which Angela didn’t know since she was in New York at the time. She tracks down Miles and asks him about his encounter with Jim, who the kid calls “a f–king lunatic.” Miles tells her that before Jim started pounding him, he poked him with some sort of needle. Angela’s confused as to why Dexter punched him after the cops showed up, and when Miles shows her his neck, she sees a visible needle mark. 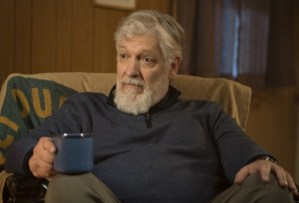 Back in the woods, Elrick screams that Kurt ordered him to bring Dexter in alive, “but he’ll have to understand,” the gunman says firing a few more rounds in Dexter’s direction. Dexter finds a sign that leads to the abandoned summer camp, so he purposely drips blood to lure the madman there.

Meanwhile, Kurt and Harrison go to the high school’s batting cages, where Kurt teaches the boy how to swing properly. Kurt then hits Harrison with three fast curveballs. Then four. Soon, Harrison is stepping into the pitches, wanting to get hurt on purpose. Kurt eventually turns the machine off, and offers to cook the kid some venison. They begin the trek toward the man’s murder cabin.

Angela tells Logan that she can’t stop thinking about the opioid case. The detective gives her the rundown of Miles squealing on Jasper, and how Jasper accidentally overdosed. She questions the coroner who investigated Jasper’s death, but he confirms it was accidental. However, she inspects his neck and finds a needle mark that exactly matches Miles’.

When Elrick gets to the camp, he notices a missing knife that Dexter snagged. Dexter goes full-on Jason Voorhees, smashing through a mirror to tackle Elrick to the ground. Elrick reveals that Kurt is bringing Harrison to his cabin. Dexter swiftly stabs him in the chest, covers him with a tarp and steals the guy’s jacket and hat.

At the cabin, Kurt tells Harrison to stop punishing himself over his faults, and that he should find what brings him joy and do it. While Dexter frantically texts his son to warn him about Kurt, Harrison asks for the story behind Kurt’s arrest. Kurt replies that it was “just a little mix-up,” and that his dad murdered a girl in Iron Lake years ago. Kurt questions why Harrison and Jim got into a fight at the truck stop. The teen says he keeps wanting something from Jim that he can’t quite seem to get. Harrison thinks Jim knew how different they were. “We don’t get each other on a normal father/son level. I feel like he’s always holding something back from me,” the boy says. Kurt, always playing mind games, tells Harrison that if he was his son, he never would’ve walked out on him. 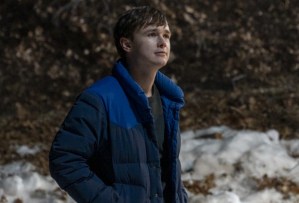 Kurt says he has to take care of something, and when he comes back, he’s dressed in his wintery white murder gear. He forces Harrison outside at gunpoint just as Dexter pulls up. Kurt thinks it’s Elrick behind the wheel at first, and wants Dexter to watch as he murders his son. But just as Kurt realizes it’s Dex in the driver’s seat, Dexter tries to mow him down, but the baddie takes off running. Dexter and Harrison embrace, and as Kurt disappears into the night, the reunited father and son drive off.

Dexter tells Harrison there’s so much he should’ve told him earlier. He says the boy never needs to feel alone with his dark thoughts ever again because he was also born in blood, just like him, and they share those same violent urges. He tells him all about Harry’s code and how he learned to channel his urges. “I’m going to tell you everything,” Dexter says. Harrison leaps over to hug his dad as they continue driving away.

Meanwhile, Angela’s at home going over files on Jasper, and looking into Dexter’s true identity. After a Google search or two she connects some integral dots: Ketamine was found in Jasper’s system… the same drug Miami’s Bay Harbor Butcher used to inject into the necks of his victims.

Will the father and son take down Kurt together, and what are your best guesses for how this will all wrap up? Sound off in the Comments!