A little blackmail never stopped Larry David from trying to get his way.

In the Season 11 finale of Curb Your Enthusiasm, Larry dished out some highly unsolicited marriage advice, while also hosting an event for a hero. But these weren’t the only shenanigans L.D. was up to. With Maria Sofia still terrorizing his Hulu series and Irma Kostroski wreaking havoc on his personal life, was Larry successful in saving his show and avoiding a lawsuit? Read on for a recap of “The Mormon Advantage.”

We begin on the set of Larry’s new show, where Maria Sofia is constantly forgetting her lines. When the city council repeals the city’s fencing law, Larry can finally rid himself of the worst actress ever (or so he hopes). Shortly after, Larry asks Stan to rope off his director’s chair so no one will sit in it.

Later, Larry breaks up an argument between Leon and Irma, to which Irma threatens it’s “either him or me!” Larry would love nothing more than to kick Irma to the curb, but he’s got to get her to repeal the law first. He promises Leon that in just a few days, she’ll be gone.

Larry asks Jeff and Susie if Leon can crash with them for a few days, but Larry’s got to do something for Susie in return. She’s throwing a party to honor retired Army Lt. Col. Alexander Vindman, but since her kitchen is a mess (thanks to Leon), she gets Larry to agree to host it at his place.

The next day on set, Larry’s chair is roped off, and of course everyone around him is giving him the side-eye. Even Ted Danson tells him it’s not a good idea. “It’s not going to end well, I promise,” he warns Larry. “Nobody likes a roper.” 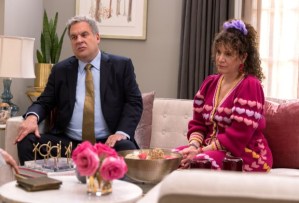 At the city council meeting, Irma says the five-foot fence law is “government overreach.” Even though a fellow councilwoman calls it a safety issue, the council agrees to vote on the issue in a few days. While there, Larry meets a Mormon named Micah whose wife is on the council. He immediately asks the guy how many wives he has. (The answer is only the one). Larry wonders how great it would be to spend time with one wife, get sick of her, move on to the next one, etc. Always classy, that Larry David!

At the event for Vindman, Larry accidentally steps in dog poop while trying to avoid an awkward hug from a friend, so he throws his shoes in the garbage. Cheryl and Susie take him to task for the faux pas, and then ask him why he roped off his chair on set, which sends Larry into a tailspin about Maria Sofia, her father, Irma and everything else under the sun.

Leon and his new(est) girlfriend Mary Ferguson are also at the event. While they’re chatting, Larry sees Micah with another woman. (Hmm…) When the event ends, it’s pouring outside, so the shoeless Larry grabs a dry pair of shoes from an exhibit  inside the nearby Holocaust museum, and skips his way out the door.

Later, Irma asks Larry if he told Micah to get a girlfriend. Melinda apparently thinks Larry is to blame for her husband’s new ladyfriend, and therefore, they lose her vote for the fence law repeal. He calls to apologize to her and promises a large donation for her church. He asks for her vote back, and they strike a deal!

Vindman uses Larry’s upstairs bathroom and overhears Larry’s call to the councilwoman (which he calls a “bribe”). He says he’s going to transcribe the conversation and send it to Councilman Weinblatt, thereby ruining Larry’s plan. He also says he knows Larry stole shoes from the Holocaust museum, too. It’s never a good thing to get on a whistleblower’s bad side, I guess. 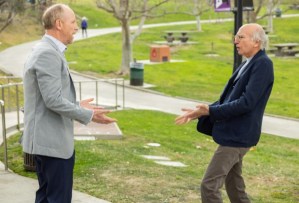 Irma finds the shoes-in-question and is horrified to discover they’re from the museum. She faints and falls to the ground.

Larry’s next move: Intercepting the transcription that Vindman dropped off at Weinblatt’s home. He convinces the man’s elderly mother to let him into the house, and while she’s making tea, he scrounges for the document. Meanwhile, Irma, who was sober and “in the program,” is now at a bar drinking following her shoe discovery.

Larry finds the document he was searching for, and daydreams about kicking Maria Sofia’s father off his set and firing the terrible wannabe actress. Then, he imagines Irma moving out of his house once and for all.

But his dream comes crashing down when Irma doesn’t show up to her meeting, causing the five-foot fence law to not get repealed. When Larry tries to flee the home in a panic, he trips and falls into a pool, which of course, did not have a fence around it.

Did Larry get what he deserved? Grade the Curb finale (and season) below, then let us know your thoughts in the Comments.