The following contains spoilers from the Dec. 24 season finale of Prime Video’s The Wheel of Time.

When we last left our wheel of heroes, they were split up yet again upon the shocking revelation that Rand (played by Josha Stradowski) is, in fact, the Dragon Reborn. While off trekking through the death-infected Blight with Moiraine (Rosamund Pike) to confront the Dark One, the remaining Two Rivers folk needed to gear up for a massive battle with an army of Trollocs headed their way and all but guaranteeing their destruction.

In the wake of the season-ending battles both epic and darkly personal — Rand’s clash with who turned out to be Ishamael wound up leaving Moiraine stilled —  TVLine spoke with showrunner Rafe Judkins about the book elements he changed, those he surprisingly retained, and what we can expect from Season 2. Plus, there’s a confirmation regarding a beloved character who might not be truly dead…. 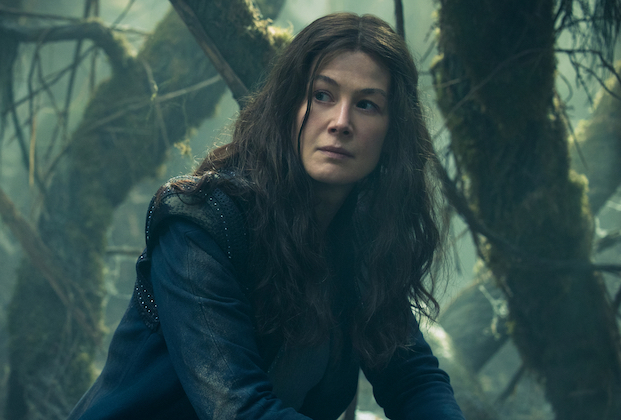 TVLINE | You did what a lot of people said might be impossible, and that’s adapt The Wheel of Time to live-action. Has it all been a bit surreal for you?
Yeah, it does feel really surreal. It’s felt like we’re just working on this weird student film all alone in Prague for years, now, with this incredible cast, so to have it out in the world and to see people really able to see it, and see that Wheel of Time is now back on the bestsellers list, and that it’s the No. 1 show in the world…. It’s kind of crazy to be processing the idea of this thing that I think existed in a very niche area of nerdom, but with a lot of people who really love it, and that I really love. And to see it receiving widespread recognition from, like, my mom’s friends [Laughs]… It’s really special.

TVLINE | We can safely say the finale takes some massive liberties with the source material — even more than in previous episodes. How did you decide what to keep in and what to tweak for the screen?
We’re always thinking about the long game. We are adapting 14 books. If we’re wildly lucky, we get eight- to 10-episode seasons. We will not have a lot of time to tell this story for how much story there is to tell, so we’re always thinking about that and building toward, “What is the series about as a whole? And how can we deliver on that?” If we get stuck in the minutiae of trying to deliver every plot point from the books, we’ll fail miserably.

The finale in the books is very much about Rand. Rand fights Ba’alzamon at the Eye of the World and then teleports to Tarwin’s Gap and levels an army of Trollocs, finds the Horn of Valere…. He does all of the things while most of our cast is unconscious. For us, the books are an ensemble book series, even though the first book is very much a Rand story, so we really wanted to try and make this finale feel like an ensemble piece as well. Taking those pieces that Rand did in the books and splitting them amongst our other core characters was a big, important differentiation from the books.

And secondly, where all the characters land at the end of this is different than they do in the first book because we are moving into seasons that will tell multiple book stories in one season. So you’ll see some of them heading off in a direction that’s very reminiscent of a later book, and some of them heading off in directions that are reminiscent of Book 2. We’re trying to always keep in mind the bigger picture and how we can, if we’re lucky enough to do it, land this ship at the end of the story. 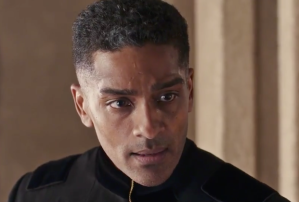 TVLINE | The cold open for the finale gives us some Lews Therin (played by Alexander Karim), which is interesting considering how his death scene opens the entire book series. And in the show, he gets to usher in the finale of the episode “The Eye of the World.” Was that the whole point?
Yeah, we’re always trying to do little nods like that. I wanted the first season to convey to new audiences all the best things about Wheel of Time and the things that are different about it from other fantasy series. The whole series has a lot of stuff that’s really unique and really interesting that isn’t really fleshed out in Book 1, and I think TV audiences are less likely to stick with you for as long to find out those things.

So I wanted people to see this world that had been broken. And I wanted people to see Lews Therin and be able to understand this thing that drives so much of the story, and the lore of our world, is this schism between men and women and the Aes Sedai being only women, and seeing the moment that happened, which is described in the books but never seen. That scene was able to do a lot for us while just being two people talking in a room, so I was excited about being able to put that scene up. 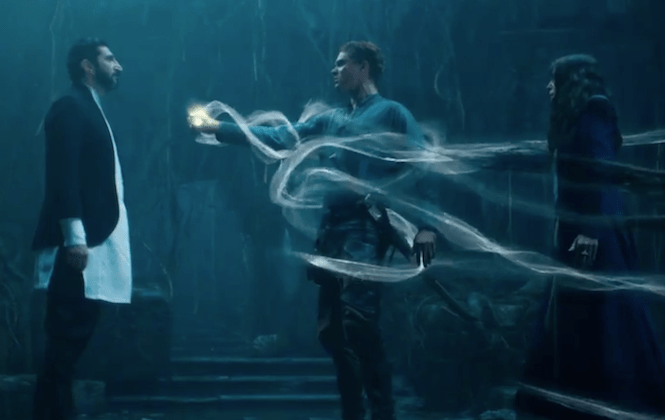 TVLINE | Rand has a pretty brutal, mental battle with the Dark One in this episode. Did you always envision the climax of the season happening this way?
Well, I think the end of the first book does such a good job of doing something a bit more psychological than you’re expecting — and always the books do that with the Dark One. You’re talking about the Dark One, who is in a prison and is going to break the world. There’s these fantasy cliché aspects to it, but when you dig deeper in the books, they’re so interesting and it’s about characters and the choices they make.

So we wanted to really see that in this finale, that when we’re talking about the Dark One or darkness, how different is it really from light? There is much more complexity in what’s going on with these characters and the choices they’re making than you might think. We always talked about this finale as people imagining, “He’s going to the Eye of the World to fight the Dark One! It’s going to be flames and explosions and all this stuff!” And the women are doing flames and explosions, but Rand is really having a conversation. I think it’s such an interesting way to approach where he’s going, moving forward. 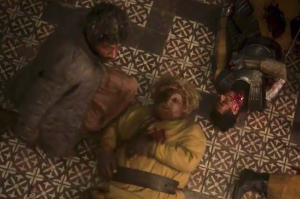 TVLINE | I have to ask, and I’m sort of desperate for an answer. We see Loial, played by Hammed Animashaun, get stabbed multiple times by Padan Fain. Is he really dead?
Dead! He’s dead! No, I’m just kidding, he’s not dead, don’t worry. I adore Hammed, he’s still in Prague shooting. Some people are in great jeopardy at the end of Season 1 and survive, and some of them don’t. But hopefully this will also be a light heart-flutter scare for audiences to emotionally prepare themselves for future deaths.

TVLINE | The back half of this season has been quite thrilling in terms of fight sequences and flashbacks. Are there any set pieces coming up in Season 2 you can tease that are shaping up to be as spectacular, if not more so?
We are currently planning a battle sequence that I think will top what we did in Season 1. There are some people who arrive at the end of Season 1 who have quite an impact on Season 2, and I think a battle with them is going to be very, very cool.

TVLINE | I was pleasantly surprised to see such a lengthy tease of the Seanchan at the end of the finale. They look absolutely terrifying. How would you explain their role in the story to someone coming into the series with fresh eyes?
When I first read the books, I found the Seanchan to be so exciting because it was not the way I expected the story to be told. Like, you get into the patterns of fantasy books and there’s a lot of pieces of “Eye of the World” that follow very familiar fantasy patterns. When I probably truly became obsessed with The Wheel of Time was the arrival of the Seanchan in Book 2, because I didn’t know what was going to happen next because it’s so unique and it’s not the way you usually tell a story in these kinds of books. I want them to serve the same function in the show. They should really slap the audience in the face and say, “You don’t know what’s coming next, and this world is way bigger than you think it is.” And hopefully the Seanchan get to do that in the show, too. 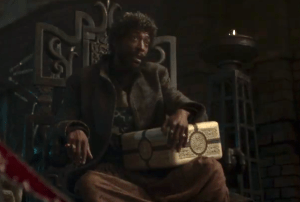 TVLINE | I’ll be honest, I did not expect the Horn of Valere to show up in this episode — or at all in this series. I think I’ve gotten used to fantasy adaptations writing out magical horns. Did you debate keeping it in the show?
It’s interesting. A lot of writers in the room obviously who weren’t familiar with the books were like, “Why are we doing the Horn of Valere?” [Laughs] I think it’s too iconic and too important to Book 2 to ignore it, and we’re trying to use it as much as we can to tell a really emotional story for two of our characters in Season 2. It’s one of those things that people would cut out, but I think it would be a mistake to do that. It’s too important to the series, and I think we’ve figured out a way to make it feel really cool.

Want scoop on The Wheel of Time Season 2, or for any other show? Email InsideLine@tvline.com and your question may be answered via Matt’s Inside Line.