Disney+’s latest MCU series, Hawkeye, did have a more typical post-credits scene, and it would have been a real hoot.

As released on Dec. 22, Hawkeye‘s six-episode run built to a major melee at the Rockefeller Center ice rink, where Clint and Kate let fly with any and all kinds of freshly fabricated trick arrows.

Among the projectiles in Kate’s quiver was another Pym arrow, which we first saw in Episode 3 (where it was used to embiggen a regular arrow, which then plummeted down onto one of the Tracksuit Mafia’s trucks). 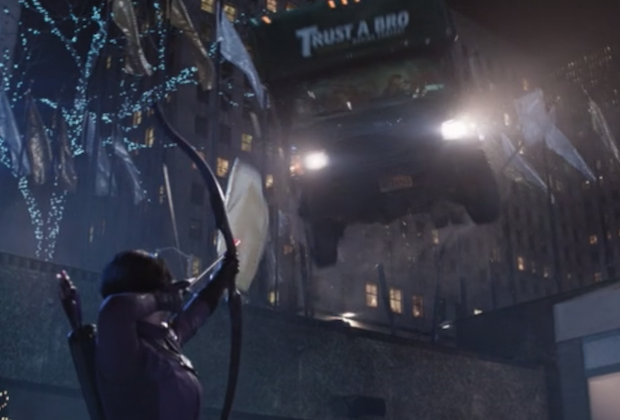 This Pym arrow, however, was set to shrink mode, and as such it turned a Tracksuit truck that had barreled through the railings above and was plunging toward Kate and Clint on the rink into an itty-bitty, toy-sized vehicle.

Just as a stunned Kate and Clint wondered what to do with the tiny Trust-A-Bro truck filled with tiny Tracksuit goons, the owl that Clint had “met” earlier whilst hung up in the Rock Center Christmas tree swooped down and flew off with it.

Minutes later, Hawkeye‘s season came to a full close, and all viewers got as a “bonus” was a full performance of Rogers: The Musical‘s first act showstopper, “Save the City.”

But there was an actual post-credits scene, it has since been revealed.

“The post-credits of the finale of Hawkeye was meant to have the owl taking the bros to its nest,” Elaina Scott, a senior animator who worked on previs and postvis for the series, shared on Twitter.  “Kinda sad they cut it. Would have been hilarious!!”

Would you have liked to get a bit more closure on the miniaturized Tracksuit bros? Or were you really pining for a tease of an MCU series/movie to come?