Dickinson penned a fitting farewell for Emily in the series finale of Apple TV+’s historical comedy — but did she write herself a happy ending?

Friday’s finale begins with Emily enjoying nature in her garden when she’s visited by her old pal Death. He’s got a nice new white suit on, and he thinks she could use a new look, too: “You’ve got work to do, Miss Dickinson. You’re gonna need a uniform.” Back at home, she can’t even unbutton her own dress and has to call in Lavinia to help get her out of her corset. She complains that these constricting clothes are stifling her creativity: “Inspiration means inhalation.” So she enlists Betty to help her design “a dress I can write in… a dress I can live in.” 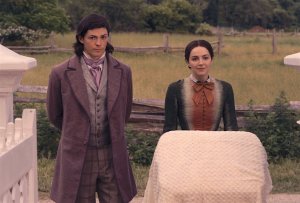 Austin, meanwhile, is ready to make peace with his father, and he and Sue show up on his parents’ doorstep to introduce them to their (still nameless) grandson. He also has a proposal for his dad: He wants to represent some men who were arrested for helping to free a Black woman who was sold into slavery, and he wants his father’s legal counsel. Dad is reluctant at first, but Austin’s passion for justice convinces him to say yes. (Should we go ahead and make a shingle for Dickinson & Son, Esquire?)

Soon, they get another visitor: Colonel Higginson, who’s been exchanging letters with Emily and fell in love with her words. Emily is upstairs excitedly designing her dress with Betty — a streamlined white dress with buttons in the front, and pockets! — when she hears that Higginson is there. She freaks out (“Our relationship is strictly text!”) and refuses to come downstairs… which is fine with Maggie, because she’d like to have Higginson all to herself. Emily’s dad tells their visitor that Emily is “an odd duck,” but then Lavinia outdoes her by entering the room in a giant red sweater and ranting about dead men. Is this a performance art piece? Because we’re kind of into it.

Emily and Betty settle on their dress design, and Emily reassures herself: “Even if I can’t change the world, I’m still gonna write.” Austin and Sue announce that they’re naming their son after his dad: Edward, or Ned, for short. Plus, Higginson recognizes Betty’s name from his conversations with Henry and tells her he’s alive and well, presenting her with a bundle of his unsent letters. And Emily writes on, day after day, verse after verse. She gazes at a painting of a boat and imagines herself alone on a beach in her new white dress. She’s serenaded by mermaids on a distant rock, and she climbs into a rowboat and heads towards them, telling them: “Wait for me. I’m coming.”

Grab your quill pen and give the Dickinson finale a grade in our poll, and then hit the comments to share your thoughts.