Tyler Perry’s Sistas fans who thought Season 3 was messy but thrilling better brace for themselves for an explosive and emotional Season 4… if the new trailer is any indication.

BET dropped the sizzling-hot promo Wednesday night during the Season 3 finale of the popular and soapy drama, which strongly suggests Zac’s legal problems surrounding his Wall Street wealth are far from over. (Season 4 premieres Wednesday, Jan. 5 at 9/8c.)

In one scene, an investigator shows up at Karen’s salon and asks if Zac lives with her. Karen immediately hunts down Zac, and when he asks why she’s so curious about his finances, Karen dramatically exclaims she doesn’t want the father of her unborn child to wind up in prison. Is he the father, though, Karen? Is he? 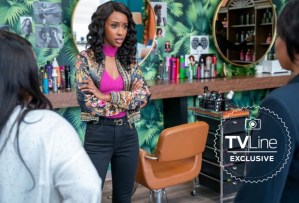 Meanwhile, Zac’s ride-or-die Fatima is shown threatening and possibly destroying Hayden. Andi confronts Fatima about her actions, and she denies any wrongdoing, but later, Andi tells “Zatima” they look “guilty as hell.” On one hand, it seems as though Andi is overreacting. However, by the end of the 60-second clip, Zac is shown asking Fatima what she did, and Fatima tells him the less he knows, the better. Ooh, Fatima!

Elsewhere in Atlanta, Danni and Preston bicker over her relationship with El Fuego, Sabrina flirts with a hot-looking new dude with an exotic accent, while a shocked and offended Calvin looks on and Andi can be seen in bed with Robin. 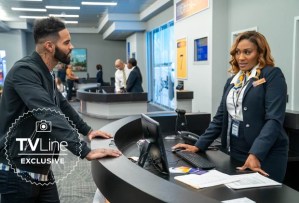 She also tells a suddenly repentant Gary that his attempts at winning her back are too little and too late. Check out the video above and TVLine’s exclusive photos for more clues about what Season 4 has in store.

Are you excited about Season 4 and how it might set up the BET+ Zatima spinoff? Drop your thoughts in the comments.