Hawkeye had many loose ends to tie up with its finale, and the Disney+ series wasted no time.

What was by far the longest episode yet opened with Wilson Fisk aka Kingpin (played by Daredevil’s Vincent D’Onofrio) in a meeting with Eleanor. Remember Kate’s dad who died in the Battle of New York? Well, he owed a fortune and Eleanor worked with Kingpin to pay off those debts.

Eleanor recounted how she took care of Armand III and framed Jack, but since her daughter Kate is getting too close to whatever they’ve been doing, she wants to pull out of this shady alliance. She even made copies of everything as an insurance policy. Kate watched a video (thanks, Yelena!) of said conversation on her phone, realizing her mom was the one who killed Armand. The would-be superhero tried to send Clint home to his family, insisting it’s her mess to clean up. However, Clint made one thing clear: “You’re my partner. Your mess is my mess.”

Elsewhere, Maya and Kazi met up with Kingpin, who asked why Maya hasn’t been keeping a typically low profile. In light of everything, Maya told the big guy she has come to her senses and decided to “stop chasing ghosts.” After all, finding her father’s killer wouldn’t change anything. She even asked for a few days off to clear her head, which Fisk granted. While alone with Kazi, though, Fisk revealed his displeasure with the situation. Between Ronin running around the city, an Avenger getting involved, Eleanor pulling out of their arrangement and Maya turning on them, “the people need to be reminded that this city belongs to me.”

Clint tried to console a shook Kate, who decided to focus on confronting her mother at the company holiday party that night. However, they need more ammo — like, a whole bag of dangerous trick arrows — for what they were about to get into. Cut to the next scene where Clint fashioned many more arrows (with help from Kate), including one with an arrowhead labeled “Stark.” They then planned to strike at Eleanor’s holiday party.

Clint warned Kate that she didn’t have to do this, that heroes must make tough decisions. So, if she was really going to do this, he wanted to know that she was ready. Kate told Clint about seeing him when she was younger, fighting aliens in the Battle of New York with no powers, just a string and a stick. That showed her that anyone could be a hero and fight, no matter the cost. In other words: Oh yeah, she’s ready.

With the party underway, Kazi and the rest of the Tracksuits waited for Eleanor’s arrival. In a last bit of training, Clint asked Kate to assess their threats (ugh, Gary!) and assets (LARPers as cater waiters!) at the party. Much to Kate’s surprise, Jack got out of jail and was in attendance — sword in hand, even. Seriously? Nothing phases that guy.

Yelena also arrived at the party, which meant trouble for Clint. When Eleanor finally showed, Kate confronted her mom about the Kingpin video. Eleanor explained that she was blindsided when she learned Kate’s dad owed Fisk money after his death. Before she could say more, though, Jack interrupted.

Clint, noticing a red laser dot near him, warned everyone to get down right before Kazi opened fire on the partygoers from a window across the way. As chaos ensued, Jack decided it was time for the Swordsman to join the action. Kate and Clint ordered their LARPers backup to kill the lights, which made it impossible for Kazi to take more shots.

Kate, noticing Yelena, followed the Black Widow assassin (who was there to “kill Clint, have some appetizers and go”). Their side conversation moved to the elevator, where Kate tried to stop Yelena from getting to Clint on the 12th floor by pushing the buttons — but Yelena swatted her hand away. Kate then attempted to take down Yelena — LOL, sis — and Yelena yanked off her foe’s coat for an accidental hero costume reveal. That was enough of a distraction for Kate to press all the buttons on the elevator, forcing an annoyed Yelena to rush off and pursue Clint another way.

Cue a comedic fight between the pair as they grappled and tumbled through different rooms, by unphased onlookers. It wasn’t an outright slaughter and Kate really held her own, and Yelena even complimented Kate on a cool body throw. “Stop making me like you!” said Kate, to which Yelena told her, “I’m sorry, I can’t help it.” (OK, so when is the Kate/Yelena spinoff dropping?)

Yelena smoothly propelled down the side of a building, firing at Clint through the window but missing, and ultimately sticking her landing on the sidewalk far below. Kate, on the other hand, screamed all the way down and stumbled her landing, though just a bit. More Tracksuits arrived, whom Kate and Jack fought, side by side. (During the fracas, Kate apologized to Jack for her mom having him arrested. Again, Jack was surprising chill about it and held no grudges.)

Clint briefly fought Kazi before knocking the gangster unconscious and leaping out of the window as even more Tracksuits arrived. Unfortunately, the arrow anchoring his line dislodged and sent him flying into the giant Rockefeller Center Christmas tree. Kate realized she needed to get Clint, who stared at an owl while hanging on for dear life, out of that tree ASAP. She instructed the LARPers to get everyone to safety, including Jack. But since nobody was listening, Grills, Missy, Wendy and Orville decided it was time to switch gears by changing into their nifty LARPing gear to heroically clear the scene, while simultaneously waylaying some Tracksuits.

Meanwhile, Kate’s tree rescue meant using an arrow to “Timberrr!” it down. With Clint tumbling out onto the Rockefeller Center rink and the Tracksuits on the attack, it was time for him and Kate to whip out those cool trick arrows — and for Clint to reveal that, yes, he wore the new superhero suit Missy made for them. Surrounded at the rink, Kate and Clint launched their attack against the Tracksuits with trick arrows that, among other things, froze one guy’s leg, fired off a swarm of knockout darts, enlarged one man’s shoe, and shrink an oncoming truck. In the end, our heroes took down most of the tracksuit-wearing goons, while the owl from the tree swooped in and flew away with the now-tiny truck filled with the last of ’em. Oops.

Maya arrived in time to confront Kazi, even though she didn’t want to kill him. She asked him to leave this world behind with her, but Kaz feared that Fisk wouldn’t let that happen. So they fought, and Maya delivered a fatal blow. With his last breath, Kazi urged Maya to leave. “He’s coming for you,” he warned.

Meanwhile, Yelena confronted Clint at the rink. Before killing him, however, she needed to know what happened to Natasha. Clint insisted that Natasha sacrificed herself to save the world, but Yelena refused to believe him, called him pathetic. As they continued to fight, Clint tried to convince Yelena that he couldn’t stop Natasha from sacrificing herself. When Yelena asked why Natasha gave up her life for him, Clint revealed he fought Natasha but she was better than him. Yelena then told him he should have fought harder, and began mercilessly beating him.

Elsewhere, Eleanor tried to flee the scene in a car, but Fisk caught up to her. Kate arrived in time to stop him from grabbing her mom, firing off a few arrows. But it would take a lot more than that to knock the big guy down — like, Eleanor literally ramming him with the car, for starters. Kate used another trick arrow to block Fisk from getting to her mom in the wreckage. Then, using the coin flick Clint taught her, she detonated a series of arrows that Fisk had snapped in half, and the blast knocked him unconscious. With Fisk down, Eleanor again tried to level with her daughter, saying they were going to put this all behind them and go back to normal. But after killing Armand, hiring Yelena to kill Clint and framing her own fiancé, there was no going back, Kate made clear, as the cops came to arrest Eleanor.

With Clint down, Yelena was ready to kill him once and for all. But she lowered her gun when Clint used Natasha and Yelena’s secret whistle. Clint said that Natasha had told him all about her sister, loved Yelena, and always wanted her safe. This is what finally got through to a teary-eyed Yelena, who lamented to Clint, “You got so much time with her.” Noting that things shouldn’t have gone the way they have, Yelena said that if she was there in Vormir, she could have stopped her. But nothing was going to stop Natasha; she made her choice and, as Clint put it, “we’re going to have to find a way to live with that.” Cue the waterworks as Yelena said, “I loved her so much,” and Clint responded, “Me too.” Yelena offered Clint her hand to stand and he took it, both still grieving Natasha. Clint apologized and Yelena walked away, bringing their conflict to an end.

Kingpin escaped from the scene of the blast, only to run into Maya, who was there to kill him for putting a hit on her father. Fisk pleaded with skilled assassin, insisting that they were family. We didn’t see the shot, but Maya fired her gun. Is Fisk really dead? 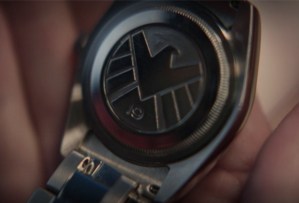 With things finally settling down, Clint told Kate he’s proud of her. After all, she took on Fisk by herself and not many people can walk away from that. Then as Christmas Day arrived, Clint kept his promise to return home to his family in time, arriving with presents and a few “strays” — Kate and Lucky the Pizza Dog. Clint privately returned the Rolex to Laura, who turned it over to reveal the S.H.I.E.L.D. logo on the back. Coupled with the etched number “19” (as in Agent 19, noted by TVLine reader Tom), is this a final confirmation that Laura is/was Mockingbird?

The episode wrapped with Clint burning the Ronin suit and Kate rattling off potential superhero names for herself. Lady Hawk? Terrible, according to Clint. Hawk-eve? Even worse. Hawk Shot? Lady Arrow? Nope, and DC would like a word with you. Clint had another idea in mind, but the credits rolls before we could hear his answer.

Hawkeye left one final Christmas gift for fans: a mid-credits scene with a full performance of “Save the City” from Rogers: the Musical, featuring real-life Broadway star Adam Pascal.

What did you think of Hawkeye’s finale? Grade the episode AND the season below, and let us know your thoughts in the comments.