The Last O.G. is proof that you should never underestimate a good show or a good man. That’s because Tuesday’s Season 4 finale was packed with tenderness, twists, food, realness and heartbreak.

The TBS comedy’s finale opened up with an excited Tray presenting a tasty tasting menu to Josh, Amira and Shahzad in preparation for their graduation dinner. It included fried bologna and cheese sliders, fried chicken, macaroni balls and some kind of dessert loaf that was so decadent, Shahzad lost the feeling in one of his feet.

Over at the community center, an impressed Veesy told a helpful Tray he could take over her job once she got promoted, and Tray happily agreed while showing her the graduation teddy bears he got for the twins. But the good times didn’t last long when Percy showed up to the community center with devious demands on the loan he gave Tray to bribe the city commissioner.

Percy said he needed Tray to hold some hot diamonds for him or else, but when one of Percy’s henchmen showed up, Tray turned him away, and Veesy overheard the exchange. Tray told her about bribing the commissioner with Percy’s dirty money in order to open the community center, and Veesy lost faith in Tray and fired him on the spot. Taking Percy’s money wasn’t the worst part, a crestfallen Veesy said. Lying to her was. 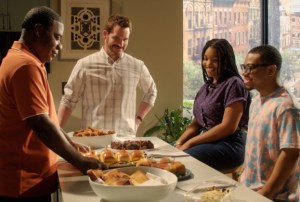 The next day was the twin’s high school graduation, and Tray had to stop by the community center because he left the teddy bears there by mistake. Javi let Tray in because he no longer worked there or had a key. Percy, who had been outside watching and waiting for Tray, snuck up on him with a gun and threatened to shoot him for not upholding his end of the bargain.

Tray managed to knock the gun from Percy’s hands, but Percy grabbed a knife and threatened to kill him anyway. Then someone shot Percy dead. It was Javi. He had accidentally walked in on the confrontation and thought he needed to save Tray’s life. Worried about Javi’s future as a boxer, Tray told Javi to run away to the Poconos for boxing camp and he’d figure out a way to make things right — even if he had to take the rap.

Determined to attend the twins’ graduation in spite of everything, Tray wiped the prints from the gun, disposed of it, and headed for the school. The community center security guard spotted Percy’s body and called Veesy and the cops. When they all watched the security footage, they could see Percy threatening Tray but because of the way the camera was positioned, they couldn’t see who shot Percy. 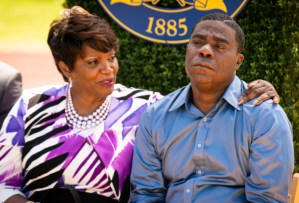 Shahzad delivered a moving speech at the graduation that made Tray cry tears of shame and joy because his only son called him his hero. Afterward, the three posed for pictures, and Tray almost told them about Percy when he saw cop cars. The cars kept driving, however, so Tray remained tight-lipped. Tray, his mom Roberta, Josh, Amira and Shahzad enjoyed what could be Tray’s last meal with them for a long time, even if they didn’t know it, and Veesy stopped by afterward.

She told Tray the police were coming for him, and she said he should tell the authorities who killed Percy because she knew who it was. But Tray said he wanted Javi to have a better life than the one he had at that age, and he wasn’t going to tell the police anything. As he was telling Veesy this, Amira met up with Javi, and he came clean. 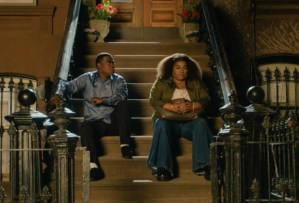 Tray went back inside, where his mom told him she was proud of him. And when he went outside to take out the trash, police cars rolled up to his mother’s place, and Tray assumed the position.

What did you think of the Season 4 finale cliffhanger The Last O.G. gave us, and do you think Tray is headed back to prison? Grade the finale in our poll, and drop your thoughts in the comments.