If you “follow the evidence”/”let the evidence tell the story”/break out any of Gil’s evidence-loving sayings, it’s clear that CSI: Vegas promoted a kiss that went amiss-ing.

Yes, married forensic whizzes Gil and Sara (played by CSI vets William Petersen and Jorja Fox) did squeeze in a kiss — aboard Gil’s favorite Vegas roller coaster — just before the season faded to black. But a CBS promo for the fourth episode of the season hinted at an earlier instance of intimacy that didn’t actually wind up in the Oct. 28 episode.

Said promo can be seen below; beneath it is the actual scene as aired, which shows that even Sara leaning in for that kiss wound up on the cutting room floor.

When “GSR” fans pointed out the buss-and-switch in late October, Fox responded on Twitter, affirming, “William P & I did shoot a hand holding & kissing scene, I even shot a scene where I talked about where Sara & Grissom have been for the last 5 years. For some reason the producers and/or network took these scenes out of the show.”

(If you’re not an OG CSI fan and simply eavesdropping, you need to know that despite being a couple for some time now, Gil and Sara have shared very few intimate moments. Ever. And before you “go there,” Petersen’s wife Gina has echoed Fox’s confusion over the “missing” moments.)

Now, I was oblivious to this issue at the time, being exposed to few on-air promos. But CSI: Vegas fan Kate emailed my Inside Line column in early November to point out the disconnect, and I in turn invited showrunner Jason Tracey to explain.

In short? The idea was to make that roller coaster ride all the more thrilling. 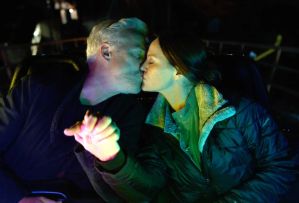 “When you shoot something and the folks at [the] promo [department] get a hold of it, it’s a very enticing moment [to included],” Tracey told me. “But from a storytelling standpoint, I think that when the audience sees where we left things [with the season finale] and how we kind of brought it all home for those two characters, sometimes rewards are sweetest if you kind of have to wait.

“We like the shape of the story that we told,” the EP added. “I hope people don’t feel too cheated, but we’ll see how they feel when they’ve gotten to absorb the finale and see that maybe we saved the best for last.”

CSI: Vegas this week was renewed for Season 2, though it appears that at the very most, Fox might (might!) continue on in some capacity as Sara, while Petersen will stay on only as an executive producer — meaning, the roller coaster liplock may have in some ways been the couple’s kiss “goodbye” to fans.

Again, both the promo and the actual scene can be watched below.

Want scoop on CSI: Vegas, or for any other show? Email InsideLine@tvline.com and your question may be answered via Matt’s Inside Line.