With just one episode of Hawkeye left, plenty of questions loom as Kate and Clint suit up for their biggest battle yet.

For starters, what is Clint’s connection to the “big guy” we now know to be Kingpin (played by Marvel’s Daredevil‘s Vincent D’Onofrio)? Plus, what’s up with that Avengers watch? Is Jack being framed? And when is Yelena getting her own spinoff?

Wednesday’s penultimate episode may have been a game changer for Kate. As we learned in the episode’s last scene, her mom Eleanor is the one who hired Yelena to take out Clint. Even more suspicious is the photo Yelena sent of Eleanor with Wilson Fisk, aka Kingpin, which raises plenty of questions about what shady dealings her mom might be into.

It’s unclear where Kate currently stands with her mom, but according to Steinfeld, “we’re about to find out.”

“She has this realization,” the actress says. “She’s just completely broken and confused and absolutely lost. She doesn’t know who to trust or who to look to.” However, Kate does have Clint and “thank God because if it weren’t for him, she would probably have a much harder time getting back up on her feet after this one.”

With this Kingpin reveal, Kate realizes that she “has no choice now but to really go to work.” If the situation didn’t feel real for the would-be Avenger before, it certainly does now.

“The stakes are higher than ever, and the one person that she’s been tirelessly trying to protect is now someone that she might need to be protected against. She comes to her senses as quickly as she possibly can after learning this information and puts her head down and does what she has to do,” she adds. 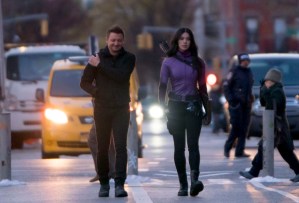 Kate and Clint have had a rocky dynamic thus far, with Clint both annoyed with Kate for her wide-eyed enthusiasm and actively trying to shield her from an increasingly volatile situation. With Kate’s family entangled in this mess, the situation has changed and there’s no way he can keep her out of it now.

“There are moments we’ve seen that Kate can be pretty annoying, and this ridiculous overconfidence of hers can get the best of the situation and not have it go the way it might have been planned,” Steinfeld explains. “But I do think Clint ultimately respects her and he might see a little bit of himself… He feels a connection towards Kate, he wants to protect her. I think that they get to a point where it’s not a Kate thing, it’s not a Clint thing, it’s a Kate and Clint thing and there’s no going back so they have no choice but to work together.”

Episode 5 also saw Kate sit down for a chat with Yelena, who chided the young archer for her lack of cutlery before issuing a warning to stay out of her way. And for those of you wondering about an extended version, Steinfeld is “pretty sure it all made it in there, which was already a lot.”

“It really so seamless getting through it with Florence [Pugh]. The banter is incredible,” the Hawkeye star continues. “We’ve got a girls’ night over mac and cheese and hot sauce so how could that not be so much fun? But [also] realizing that this scene does, in fact, carry a lot of weight. These two characters who find this quick connection and almost friendship in each other but know that that cannot and will not get in the way of what they’re both trying to achieve. Kate is at a loss with what Yelena is after and is trying to understand what she’s there to do and why she’s so sure about what kind of person Clint is.”

Whether or not Kate and Yelena will explore more of this connection on screen remains to be seen, but Steinfeld counts herself as “one of those people that would love to see more of the two of them.”